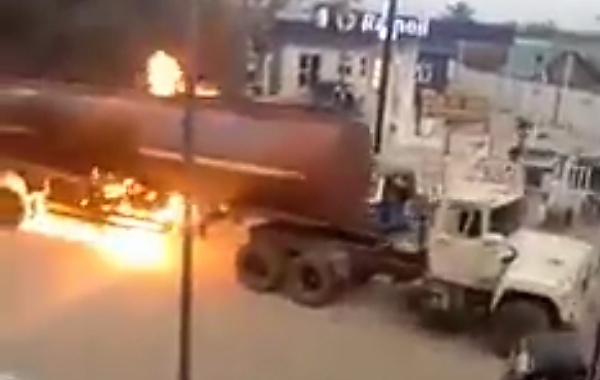 Governor Ifeanyi Okowa of Delta and the state Council of Nigeria Union of Journalists (NUJ) have commended Mr Ejiro Otarigho, driver of the petroleum truck that exploded at Agbarho, Ughelli North Local Government Area, on Saturday, for his uncommon heroism that averted a major disaster.

In a statement by the Chief Press Secretary, Mr Olisa Ifeajika, Okowa said that the bravery and patriotism-propelled risk taken by Agbarho-born driver saved what may have resulted in collosal loss of lives and property.

He expressed deep appreciation to Otarigho for the discretion he applied in steering the already burning truck, laden with petroleum product, away from a densely populated area, at the risk of his life, describing his valour as “amazing”.

According to Okowa, this act of bravery and compassion in today’s Nigeria is without equivocation, worthy of commendation and emulation.

“Yesterday, a tanker laden with diesel caught fire at Agbarho community, but for the uncommon bravery and heroism exhibited by the driver, Mr Ejiro Otarigho, a lot of houses and probably lives, would have been lost to the inferno.

“We were delighted to hear of the gallantry of the driver who took the initiative and risk to drive the tanker away from densely populated area to a secluded area before the tanker finally exploded.

“On behalf of my family, the government and people of Delta, I commend Mr Otarigho for what our God Almighty used him to do on that day – saving lives and property by his heroic action.

“In a country plagued by challenges of varying dimensions, such acts of bravery are commendable and worthy of emulation.

“As a government, we thank Mr Otarigho for this great act of putting the lives of others first before his and we thank God for saving him from the inferno.

“We are proud of you and we urge other Deltans and Nigerians to emulate your heroics acts in all their activities,” Okowa stated.

NuJ said: “The young man whom we learnt newly got married, decided not to be selfish with his life and family concerns, but made up his mind to risk his own life to prevent a major fire accident that would have thrown the entire State into pandemonium from happening.

“The tanker driver decided to be patriotic at a time when most Nigerians had lost hope in our dear nation. In a situation like this, other drivers would have abandoned the already burning truck laden with diesel on the road; and thereby causing a disaster that would have definitely affected other road users and even lives and properties within that vicinity.

“However, in that pathetic state of mind, Mr. Otarigho made up his mind to perish in the fire until he had driven the fire engulfed truck out of human populated environment to the river.

“We give glory to God Almighty that he didn’t die, but survived to tell his heroic story.

“On this note, we call on the Federal Government, Delta State Government and of course the Ughelli North Local Government to celebrate this young man and duly compensate him.

“His singular effort had saved the State so much, otherwise, if the incident had occurred, the State would have been counting its losses in human casualties and property destructions.

“On our part as a Union and mirror of society, the young Otarigho is our man of the year, and at the appropriate time, we will honour him to prove to the world that there are still patriotic ordinary Nigerians. People like him are those that truly deserve media awards. We are really proud of him.