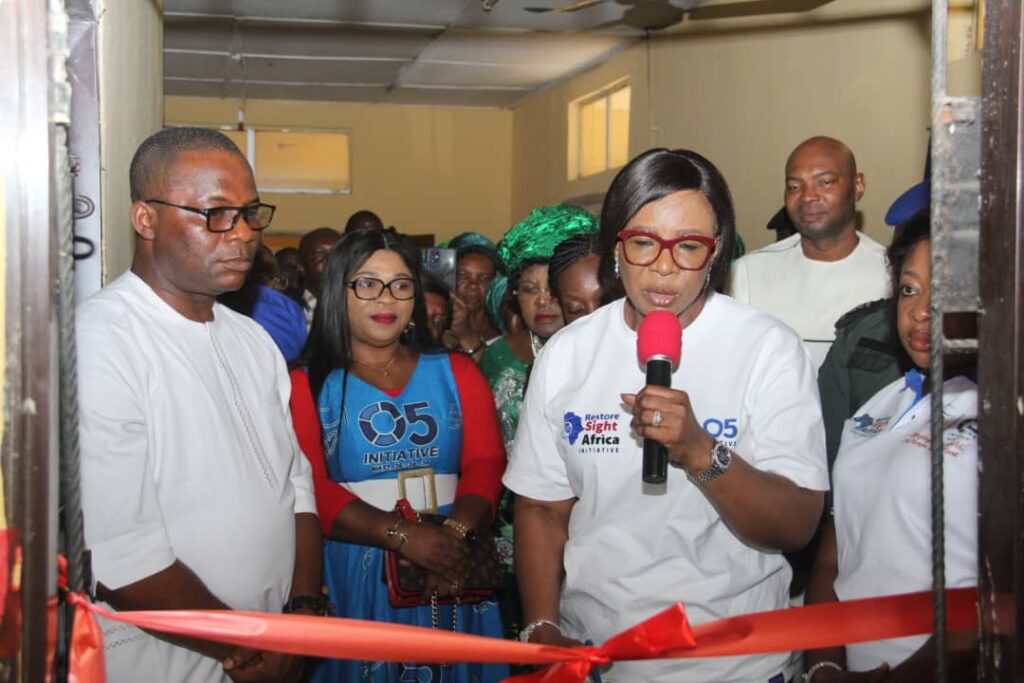 A total of 8,568 persons have benefitted from the ongoing Free Medical Outreach by O5 Initiative and her partners across the federal constituencies in Delta state.

The outreach which has visited Warri, Ethiope, Ughelli/Udu, Burutu, Isoko, Patani/Bomadi and Sapele/Okpe/Uvwie federal constituencies, has recorded a total of 1,246 eye surgeries and the distribution of 5,525 glasses and 2,895 eye drops.

Wife of the Governor and Founder O5 Initiative, Dame Edith Okowa while flagging off a five-day outreach for Ndokwa / Ukwuani federal constituency on Tuesday, June 15, 2022, at Kwale Central Hospital, appreciated the partners of O5 Initiative, the Restore Sight Africa Initiative and Ministry of Health for their support.

She also commissioned the 23rd Sickle Cell Clinic at the General Hospital, Aboh.

Dame Okowa encouraged the constituents to make maximum use of the opportunity while it lasts, noting that, “since 2018, we have moved round the entire state, preaching the word of God and preaching the gospel of sight. This is our third missionary journey.”

A beneficiary, Mr Martin Ogwu who brought his father for Pterygium surgery, said, “Apart from financial constraints, the truth is that people are confident about the doctors being used in the outreach.

“By the time you come, you are sure that you are meeting specialists and we have been hearing of and seeing blind people who after the surgery, had their eyes restored.

“Some of the private individuals that run eye care cannot be trusted because a lot of them are doing trial and error but the doctors here, we are sure that when they treat, the difference will be clear”, he said.

In his remarks, the Chairman, Ndokwa West Local Government Area, Obi Nzete, on behalf of the two other chairmen appreciated the First Lady for bringing care to their people.

Meanwhile, a total of 957 persons were attended to at Isoko federal constituency with 151 surgeries carried out, 594 prescription glasses dispensed alongside 388 eye drops.

A major highlight of the free eye treatment carried out at the Central Hospital, Ozoro,
was the case of an 80-year old widow who had bilateral cataract that rendered her completely blind for over two years and had been living alone at Arahde community.

Identified as Mama Josephine Stephen, she was on Thursday, June 9, 2022 led into the Central Hospital, venue of the outreach by her daughter in-law, Mrs Sophia Sunday.

Both eyes were operated on that day, and the bandage removed on Friday. For the first time in two years, she was able to see her grand daughter, who was born same time she got completely blind.

Speaking after Mama had danced round the hospital in excitement, her daughter in-law noted that when her mother started complaining of dimming sight, they thought she was playing pranks.

“You know, Mama is very funny and so when she was telling us about it and I told my husband, he thought she was trying to just get money from him.

“It was after a gave birth to my last girl who is over two years now and Mama started crying that she could not see my baby’s face that we knew it was serious.

“We didn’t go to the hospital because there was no money but Mama had a friend that was always bringing leaves to her and she would squeeze the water into her eyes.

“There was no improvement until I heard of the free eye care and had to come and take her to the hospital.

“We are all happy and grateful that Mama can see now. It had become so serious that sometimes, she would leave the house and go to the farm to just sit alone because she was tired of sitting at a spot” Sophia narrated.

Addressing her case, the Chief Ophthalmologist and Coordinator, Restore Sight Africa Initiative, Dr Ernest Ogbedo who operated on her, said the leaves she administered had caused serious damage on the eye.

“We had to spend hours on just one of the eyes because the Cataract had become over mature, coupled with the native medication she was applying which made it even more difficult” .

He encouraged Deltans to always seek professional medical care with issues regarding their eyes.

The O5 Initiative founder encouraged all present to reach out to people and render necessary help and assistance.