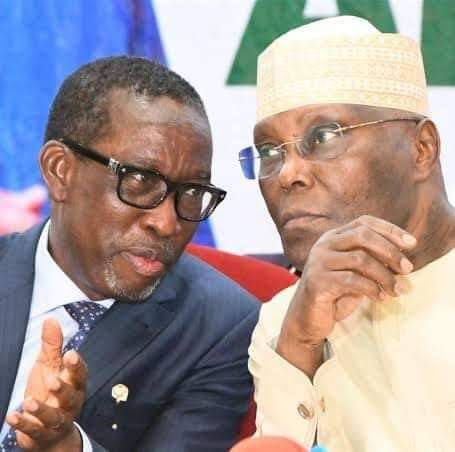 The Delta State Chapter of the Peoples Democratic Party (PDP), has chided the opposition All Progressive Congress (APC) Governorship Campaign Organisation, for being jittery over the emergence of Governor Ifeanyi Okowa as running mate to the PDP Presidential Candidate, His Excellency, Alhaji Atiku Abubakar.

The Party, in a Press Release by its State Publicity Secretary, Dr. Ifeanyi Osuoza, said it was not surprised that the APC is stressed out, because the news of the joint presidential ticket of Alhaji Atiku Abubakar and Senator, Dr. Ifeanyi Okowa has already sent shock waves into the APC fold.

As a result, the opposition has since become nervous and agitated, making rapid jumpy movements and issuing silly, childish press statements to cover their agitation and apprehension.

Reacting to an APC Press Release by one Ima Niboro, the clueless Director, Communications and Media Strategy, for Delta APC Gubernatorial Campaign organization titled: “Don’t Use Delta Money To Fund Atiku’s Ambition – Omo-Agege Campaign Warns Okowa,” the PDP described the statement as boring and ordinary, as it showed no evidence of any new and interesting ideas.

“Of course, no one is surprised at the turn of events since the author of the hackneyed Press Release is very unimaginative, a reality in the arguments that have become commonplace and stale from overuse.

“Because of their glaring inability to think of new ideas, the APC Media and gubernatorial team have by sheer laziness become sterile, unstimulating, and barren.

“It thus has become attractive for it to engage in tired propaganda, in the futile effort to seek to sway people’s mind to believe its lies about using Delta State’s money ‘to finance Alhaji Atiku Abubakar’s campaign.’

“Of course, Deltans are too knowledgeable and cultured to fall for that cheap APC deception, knowing that political party campaigns are not funded by State governments, but by political parties. It is their game and their duty.

“This base argument, therefore, confirms Delta PDP’s position that the Omo-Agege/APC campaign organization is clueless, unimaginative, nervous, and agitated.

“As usual, the opposition disinformation machine talks about “credible evidence at its disposal,” a euphemism for lies, ruse, and sham. If Omo-Agege wants people to believe that “the 2023 general election is a PDP conduit pipe to loot the State,” will it not also stand to reason that Omo-Agege’s Gubernatorial ambition is APC’s conduit to loot the Federal Government?

“Perhaps we need to remind the hapless APC propaganda structure that in 2011 and 2015, Governor Ifeanyi Okowa ran for elections, even against the State-sponsored aspirants, and even brought the international media twice to cover the 2011 Senatorial Primaries with his own finances, having resigned from his position as the SSG of Delta State.

“Okowa is a leader who is always ready and prepared for any assignment he takes up and he has done it twice successfully, when he was not even occupying a Government position. Obviously, Ima Niboro’s history is too short to remember that time.

“As earlier observed, the reckless and clueless argument of the APC and its Gubernatorial Campaign Organization did not just manifest from nothing. it is propelled by jitters, a nervous attack inflicted by the sudden emergence of Governor Okowa to run on the joint ticket of the PDP presidential candidate.

“Indeed, Deltans are fed up with APC media team’s clichéd and worn-out, imaginary and mediocre arguments about “credible intelligence at its disposal.” It is a lie, it is propaganda and Deltans will not fall for APC’s deception.

“What it shows is that the APC has nothing tangible with which to market its gubernatorial candidate to Deltans. It is all because, its so-called candidate, Senator Ovie Omo-Agege is unmarketable, as he lacks sales appeal for Deltans.

“Delta PDP thanks our members, leaders, supporters, and party faithful for remaining consistent with the party and for believing in the PDP State Government, led by our amiable, SMART, and progress-loving Senator, Dr. Ifeanyi Okowa, who incidentally, divine Grace is pushing ahead for higher service to the nation, in the months ahead.

“This reality is what has incensed the Omo-Agege Gubernatorial Campaign Organisation, and it has difficulty in coming to terms with it.

That is why they are jittery.

PDP! Power to the people.