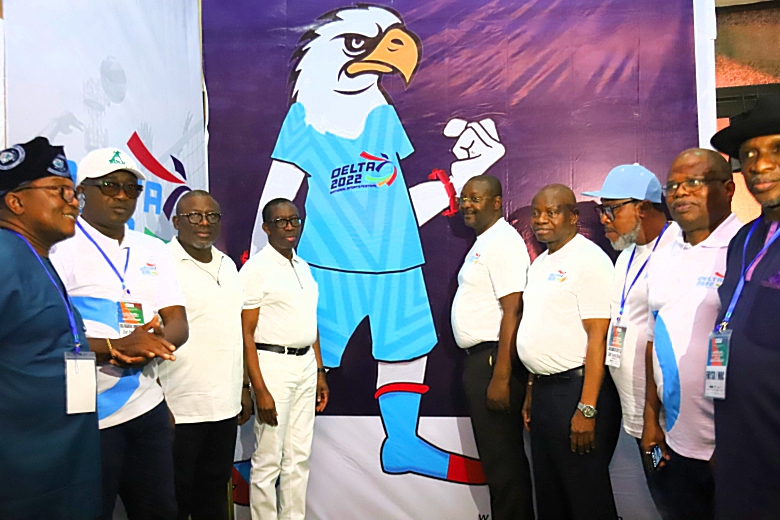 Delta Governor and Vice-Presidential candidate of the Peoples Democratic Party (PDP) Sen. (Dr) Ifeanyi Okowa has said that the state was prepared to host and win the most memorable competition in the annals of the National Sports Festival to maintain its sports dominance in the country.

Okowa gave the assurance on Wednesday, in his remarks at the Unveiling of the National Sports Festival Logo and Mascot, held at the Unity Hall, Government House, Asaba.

He said hosting the festival tagged “Delta 2022” with theme “Uniting Nigeria, inspiring the next generation” was in recognition of the role of Delta as a leader and role model in sports in the country.

According to him, the choice of Delta as host of Nigeria’s version of the Olympic Games was in recognition of the state’s pioneering role in sports growth and development, which has made it a role model and a leader in the country.

“Delta State as you are well aware, has won every edition of the National Youth Games and National Sports Festival in the past five years to confirm its position as the number one sporting State.

“We intend to continue this leadership as Delta hosts the entire sportsmen and women across the length and breadth of our country.

“Let me also state that Delta was primed to host the 20th edition of the festival but lost its bid to our sister State, Edo, at the very last minute in Abuja.

“As a sports-loving State, we were not discouraged in our quest to bring home to roost, this sporting extravaganza we have dominated for a long time. We are also positioned to be number one in the hosting of the games.

“However, as the nation looks forward to seeing Delta host our sportsmen and women to this feast, I can assure you that we are doing our best to host a most memorable competition in the annals of the festival.

“We are guided by our excellent hosting of the 21st Senior Africa Athletics Competition in August 2018 in Asaba, which received a global ovation, because of our facilities and our hospitality to our guests on that occasion.  We have resolved to do even more this time around.

“We are already updating our facilities and putting in place, new ones of international standards, because of the multi- dimensional nature of the festival,” he said.

He added that the security of athletes and officials was a top priority and urged intending participants to feel free to savour the state’s hospitality.

Minister of Youth and Sports, Sunday Dare lauded Delta State for providing 61 percent of athletes in the national teams.

He said beyond oil, Delta has another gold in sports and talents development and commended the State for it.

“I have been a Minister of Youth and Sports for three years but I have seen seven years of Governor Okowa’s investments in sports development.

“Governor Okowa you tower above your colleagues in sports development and I call on you not to rest on your oars because you keep inspiring us.

“The National Sports Festival is a celebration of Nigerian athletes irrespective of tribe and religion and today’s event which entails branding of the festival is the very essence and symbol of our unity in diversity.

“The festival is a tool for the promotion of unity of our country and we recall that when Delta won the hosting rights, we were pleased because we know we have a governor who is not afraid to break new grounds and lift the stakes higher.

“In this year’s competition, Delta will be hosting what we term the ”
‘Nigerian Olympics’ and 40 different events would be competed for in 14 days with 16,700 athletes attending.”

He called for private sectors collaboration and investments in sports infrastructure in order to unlock the multi-billion dollar business potentials in sports in the country.

Speaking at the ceremony, Managing Director of Premium Trust Bank, Emmanuel Emefienem said the bank was pleased to identify with the Festival as sponsors and official banker.

He said the contribution of sports to unity and progress of the nation couldn’t be over-emphasised.

“In partnership with the Sports Festival, Premium Trust Bank is committed to providing the needed platform to help the athletes grow in their chosing career.

“As an institution we will continue to partner with government to make our youths occupy their rightful place in global sports competitions,”

Chairman of the Main Organising Committee (MOC) and Permanent Secretary, Federal Ministry of Youth and Sports, Alhaji Ismaila Abubakar, said the timeliness for the festival was designed to ensure a successful hosting of the games.

Represented by the Secretary of MOC, Dr Peter Nelson, commended the state government and the local organising committee for their efforts in ensuring a success for the games which would be held 4th-13th November, 2022.

He said the Mascot and the logo represents the identity of the game in line with international best practices shall be used to brand all materials that will be used for the games.

He added that the MOC was determined to improve the standard of the games to make it at par with other international competitions and urged state governments to give maximum support for the games.

Ukah said the message was in line with the theme of the festival to unite the nation and inspire the new generation, assuring that Delta would host the best National Sports Festival in the history of the country.

The ceremony was attended by Speaker of the Delta State House of Assembly, Chief Sheriff Oborevwori, President of the Nigerian Olympics Committee NOC, Engr. Abu Gumel, President of the Athletics Federation of Nigeria AFN, Chief Tonobok Okowa and former AFN President, Chief Solomon Ogba among others.