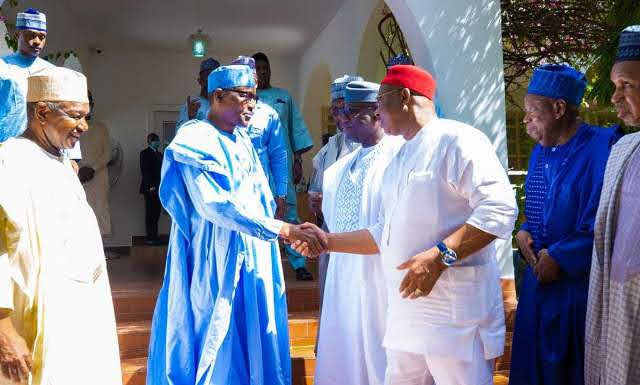 Condemnation has continued to trail Governor Hope Uzodinma of Imo state, for adorning his wrist with a Jacob and Co Astronomia Sky White Diamond Wristwatch, valued at over Seven Hundred and Eighty-Five Thousand Dollars.

The State Governor was seen in a meeting of the APC Governors with President Muhammadu Buhari in Daura, proudly showcasing the expensive diamond Wristwatch worth over 450 million naira when converted to Nigerian currency, at the present foreign exchange rate.

Chief Okonkwo Obinna, an indigene of Imo State, expressed disgust over the expensive life style of the Governor and said that it is condemnable and outrageous for a sitting Governor to be gilded with such an outrageously expensive wristwatch, worth over N450 million, in a State where infrastructure has become very deplorable, pensioners and workers of the Government are suffering and dying every day with their wages and entitlement not being paid, employment recording the highest in Nigeria as well as the educational sector in distressed situation.

“The annoying aspect of it all, is that they are the APC people who deceived Nigerians with the promise to fight corruption. How can you fight corruption when you are corrupt?

“APC, as far as I am concerned, is the assembly of highly corrupt elements in Nigeria. What is the annual salary of a sitting Governor that he will be buying and wearing an expensive diamond wristwatch worth over Seven Hundred thousand Dollars, in a state that is one of the poorest in Nigeria?

“Don’t you know what over four hundred Million Naira, that is what you will get, when you convert it to Dollars, could do for the people of Imo State?

“Let me tell you, Hope Uzodinma is a big disgrace to the people of Imo State and indeed the whole of Ndigbo,” Chief Obinna lamented.

Also in his tweet, one Jackson Ude, was sad that a sitting Governor who is supposed to be an epitome of prudence and moderation, could use over four Hundred Million Naira to buy himself a diamond Wristwatch in a state where hunger and starvation is the order of the day.

“After looting Imo state, Governor Hope Uzodinma got himself a Jacob & Co  Astronomia Wristwatch for $785,496,00, an equivalent of N478 million. I mean Uzodinma used N478 million of looted Imo State funds to buy himself a wristwatch.

“Tell me why he should not be chased out of Government,” he also lamented.

The Governor’s Chief Press Secretary, Oguwike Nwachukwu, when confronted on phone debunked the entire claim and insinuation, wondering why people should be after the wristwatch that the governor was putting on, and whether anyone is looking for his missing wristwatch and found with the governor.

Pointing out that it is a witchunt Nwachukwu said: “I don’t know if any body is looking for his watch and was told that it is with Governor Hope Uzodinma.

“Uzodinma is not a poor man before coming into politics. This to me shows how low the opposition has sunk in Imo State. They will go to any length to want to run the governor down. Why are people dastardly in the effort to bring the governor down?

“You will not see any where in Owerri said to belong to Hope Uzodinma, not even a hotel. The property he has is in his home town.”

The CPS said that it is a lie that workers are being owed salaries in Imo State, pointing out that through staff verification being done has confirmed the presence of ghost workers, adding that the exercise has actually exposed the fact that the number of authentic workers in the state civil service is 4,000 instead of the 6,000 that was originally claimed.

Nwachukwu said: “It is not correct that people are being owed salaries by the state government. There’s no genuine civil servant that is being owed salary. Do you know that all the teachers in Imo State are not up to 4,000?

“In Imo, genuine teachers have been verified and they have produced their employment documents for verification. It’s the ghost workers who cannot produce evidence of employment that are going about presenting themselves to the opposition and being used as tools to run down the governor.

“There is no genuine civil servant, including pensioners that are being owed any salary by the state government. The government has paid its workers up to June 2022,” the CPS said.

He condemned the opposition in the state for using mundane things as excuse to distract the governor.