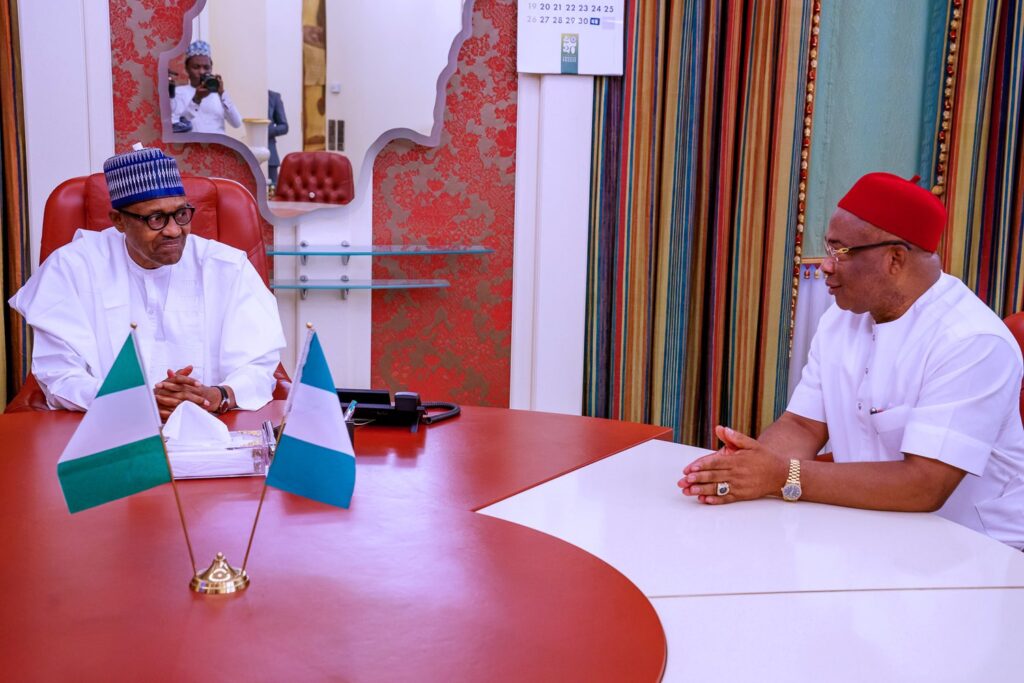 President Muhammadu Buhari has approved refund of the money spent by the Imo State Government under Governor Hope Uzodimma to fix some major federal roads within the State.

The badly dilapidated roads which Governor Uzodimma embarked on their construction recently  because of their economic importance to the State are majorly those of Owerri-Orlu and Owerri-Okigwe (both nearing completion) and will soon be commissioned by the President, as well as that of Owerri-Mbaise-Umuahia road which Buhari will also flag off when he visits the State next month.

President Buhari had earlier been slated to visit Imo State to commission some projects on July 12 and 13 but the visit has been moved to August because of the heavy rains that resulted in the slowing down of the road constructions he was billed to commission this month.

At the weekly Executive Council meeting chaired by Governor Uzodimma on Wednesday, it was learnt that President Buhari had already given approval for the refund of the money used by the Imo State Government to repair the federal roads within the State.

The Commissioner for Information and Strategy, Chief Declan Emelumba who briefed newsmen said Council also deliberated on other critical issues affecting the State, resolving among other things, that the Somachi Abattoir which is the central abattoir in the State is to be shut down to avoid epidemic outbreak.

He said the Abattoir is in a very bad state and capable of causing health hazards if nothing is done fast.

Consequently, Emelumba said Council approved that the Somachi Abattoir be closed down following approval given for the immediate commencement of the construction of a new Abattoir at Naze.

The Commissioner for Livestock Development, Dr. Anthony Mgbeahuruike was directed to take necessary steps to commence the construction of a new Abattoir in Naze before the closure of that of Somachi.

To assuage the plight of the butchers at Somachi in the event of the closure, Emelumba said they will be relocated to three major Abattoirs at Egbu (Owerri North), Avu (Owerri West) and Afor-Ogbe (Ahiazu-Mbaise).

He said their relocation will commence as soon as the construction of the new Abattoir at Naze commences and that the butchers should bear in mind that where they are to be relocated is only temporary.

“The overall objective of this is to ensure that the health of Imo citizens is not taken for granted as the present Abattoir could be described as a public toilet because of the level of pollution and the degradation of the environment that goes on there.”

Emelumba further explained: “Council noted with delight that the Federal Government has promised to refund the money used by the State Government in the construction of the flagship projects of Owerri/Orlu and Owerri/Okigwe roads by this government, and when this is done it will be a big boost on the economy of the State.

“Council has also approved a Supplementary Budget of N65.7 billion and by this approval it will now be forwarded to the State House of Assembly for the necessary legislative backing.

“Executive Council was glad to note that Dunlop, a well known international brand is coming from Turkey to open up discussion with the State Government on a partnership arrangement that will culminate in the production of rubber related products such as tyres and other rubber products, in addition to planting of new rubber plantation in the State.

“When realized, the project will boost the economy of the State, create employment.”

He assured that the arrangement will be completed in record time.

Also, the EXCO moved to strengthen the Sanitary Department of the Ministry of Environment to ensure that they have Sanitary Inspectors within the metropolis who will enforce sanitary conditions for both domestic and commercial houses and ensure that the State Capital is made safer and environmentally friendly.

In the same vein, Council noted that construction work on some of the roads are still ongoing, though not at the same pace as in a dry weather.

Emelumba however assured that the contractors are conscious of the season and determined to deliver their jobs on agreed time.

Regardless, he said in the next two weeks the construction of Owerri/Mbaise/Umuahia road and Orlu/Mgbee/Akaokwa roads will be flagged-off and full construction works commenced.

Emelumba further explained:”When these roads are completed it will be a marvelous achievement for the 3-R administration in Imo State. This is hinged on the fact that all the major economic activities in terms of the roads in the State would have been touched and the entire LGAs would be connected to very good road network.

“It is also heartwarming to note that before the Executive Council rose for the day, Governor Uzodimma received,  appreciated, encouraged and rewarded one Miss Ezinne Nwakuba of Oburi-Amiri in Isu LGA of Imo State with a cash reward of N5 million for making Imo State proud at the recently held National Medium and Small Micro Economic Scheme (MSMEs) competition held at Abuja on 27th of June, 2022.

“Miss Ezinne at the occasion presented to the Governor a plaque of National MSME Award 2022 Nigerian Export-Import Bank Award for outstanding MSME Clinic participant and a Brand New Car key presented to her by His Excellency, Prof. Yemi Osinbajo Vice President Federal Republic of Nigeria on 27th of June 2022