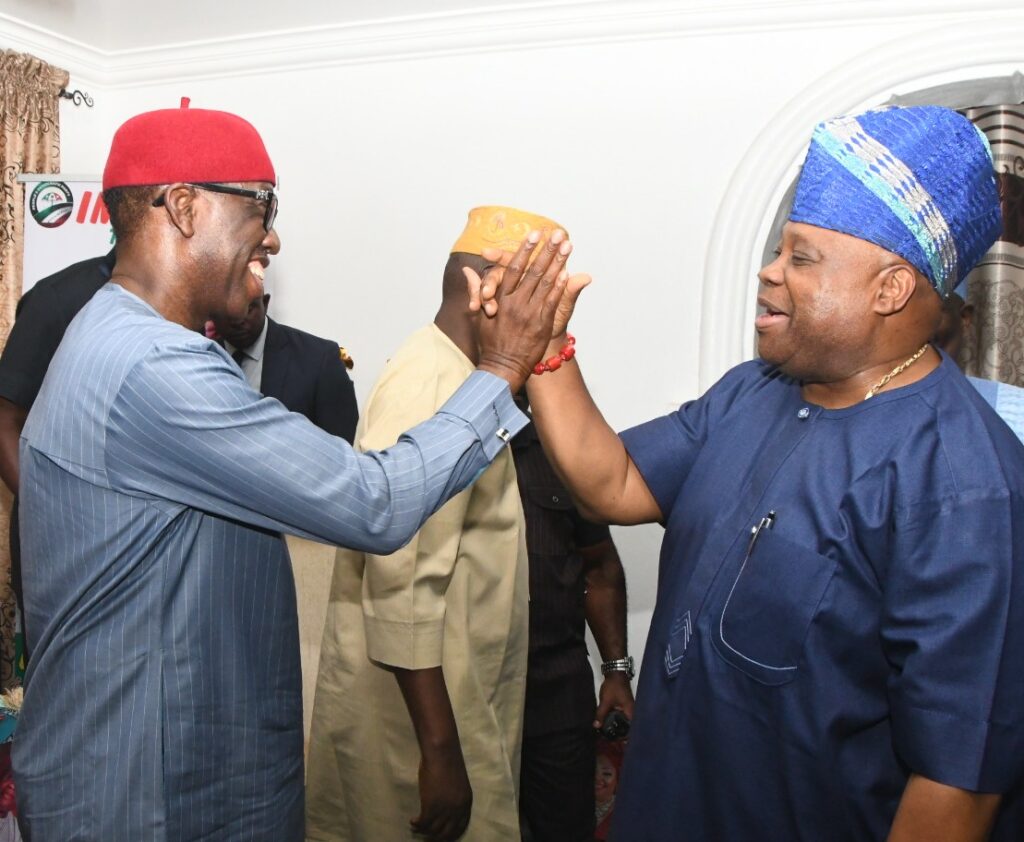 Adeleke, the candidate of the PDP was announced winner of the gubernatorial contest in the state by Independent National Electoral Commission (INEC) after polling 403,371 votes to defeat the incumbent, governor, Gboyega Oyetola of All Progressives Congress (APC), who polled 375,027 votes.

In a statement by his Chief Press Secretary, Mr Olisa Ifeajika, in Asaba, on Sunday, Okowa described the election of Adeleke as “the affirmation of Osun people’s will” and called on Nigerians to always stand for good leaders with the interest of the people at heart as Osun people just did for Adeleke.

He stated that the electorate across the 30 local government areas of the state spoke loudly and very clearly in their affirmation of their choice of Adeleke as next governor.

He lauded former governor of the state, Prince Olagunsoye Oyinlola; Senator Olu Alabi and other party leaders in the state for working together in the interest of PDP and Osun people.

Okowa noted that the election of Adeleke had signposted the reality of PDP’s determination to rescue Nigeria, saying “the mission has just begun”.

“Let me congratulate my brother, Senator Ademola Adeleke, on his victory in the July 16 governorship election in Osun.

“It is heart-warming to see you emerge as Governor-elect of Osun against all odds and I am grateful to the electorate in Osun for shunning entreaties of retrogressive forces who were ostensibly resolved on subverting the wishes of the people through vote-buying and other rigging strategies.

“Let me also thank the Independent National Electoral Commission (INEC) for demonstrating true independence as required by the laws of our land and for improving on the logistics and conduct of the election.

“The most significant aspect of this victory is the peaceful outcome of the election as Osun people conducted themselves responsibly by ensuring that the election was devoid of violence,” he said.

The gôvernor also congratulated the PDP and the Chairman of its National Campaign Council for Osun Governorship Election and Governor of Bayelsa, Senator Douye Diri and other members of the campaign council for their efforts which culminated to the victory.

He said the brotherhood displayed by PDP governors and other party members towards the election of Adeleke was what the country needed currently to take the nation to greater heights in 2023.

“Let me also congratulate our great party, the Peoples Democratic Party (PDP) and the Chairman of the PDP National Campaign Council and Governor of Bayelsa, Senator Douye Diri and other members of the campaign Council for their efforts which led to the victory of the party in Osun.

“I must also thank my principal and Presidential Candidate of our great party, Alhaji Atiku Abubakar, former Vice President, Namadi Sambo and former President of the Senate, Bukola Saraki, for their attendance at the rally in Osun, an action that contributed immensely to the outcome of the election.

“Going forward as a nation, we can only develop further if the people are allowed to chose their leaders at all levels without any hindrance as has been exemplified in Osun.

“It’s therefore, a clarion call on INEC to strive to do the right thing as an unbiased umpire.

“On behalf of the government and people of Delta, I congratulate you my dear brother and friend, Senator Ademola Adeleke, on your successful election as Governor-elect of Osun.

“It is my prayer that God will grant you wisdom, knowledge and the needed resources to attend to your campaign promises of taking away the darkness that pervades your state, Osun,” he added.