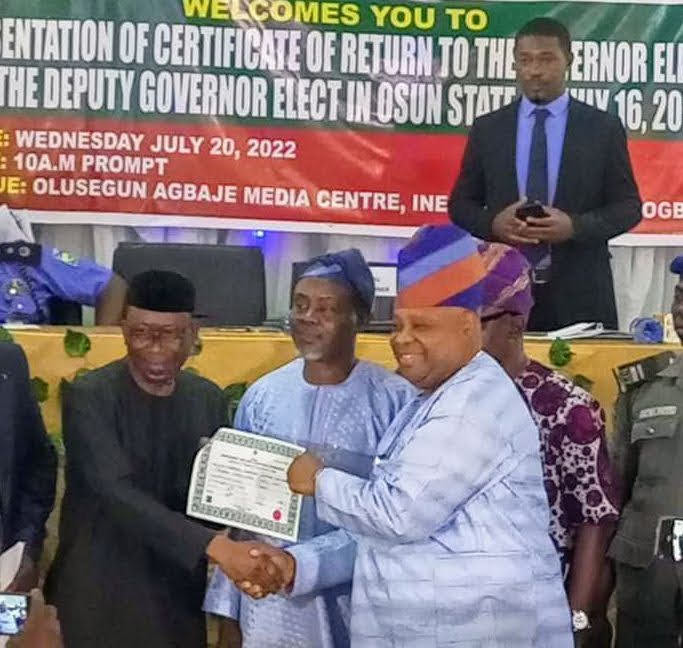 The Court of Appeal sitting in Akure on Wednesday, July 20, 2022, ruled in favour of Senator Ademola Adeleke as the candidate of the Peoples Democratic Party, PDP in Osun State.

It will be recalled that A Federal High Court in Osogbo, on Wednesday, May 18 2022, dismissed a suit filed by Dotun Babayemi seeking to be declared the Peoples Democratic Party’s candidate for the July 16, governorship election in Osun State and affirmed Senator Ademola Adeleke as the validly elected PDP candidate for the governorship poll.

Justice Nathaniel Ayo-Emmanuel, while delivering judgment, held that the primary election conducted at the WOCDIF Centre, Osogbo, on March 8, 2022 which produced Babayemi, was null and void, as the exercise did not follow provisions of Sections 82 (1) and (5) and 84(1) of the Electoral Act, 2022 as the Independent National Electoral Commission was not given 21 days notice before the exercise.

The judge also noted that the primary was not observed by the Independent National Electoral Commission, as stipulated by the Electoral Act, 2022 and then ruled that primary election conducted by the State Working Committee of a political party is not recognised by the Electoral Act, 2022, adding that all conditions for a valid primary election were met by the exercise supervised by the PDP national leadership that produced Adeleke as the governorship candidate.

For Babayemi, the court noted that although he was voted for by the right delegates but the primary election that produced him took place at the wrong venue and was conducted by the wrong people. So, his primary can’t stand.

Consequently, Babayemi, dissatisfied with the ruling by the Federal High Court, approached the Court of Appeal to be declared as candidate of Osun PDP.

The Appeal Court has now dismissed his case and once again, affirmed Senator Adeleke as the substantive guber candidate of PDP in Osun July 16, 2022 election.

And in a related development, the Independent National Electoral Commission on Wednesday, July 20, presented the certificate of return to Osun State Governor-elect, Senator Ademola Adeleke.

The certificate presentation to Senator Adeleke was by the INEC National Commissioner, Supervising Osun, Ogun and Oyo states, Prof. Kunle Ajayi, in a colourful ceremony which also witnessed the presentation of Certificate to the deputy governor-elect, Prince Kola Adewusi.

The presentation came about 72 hours after Senator Ademola Adeleke of the Peoples Democratic Party PDP, was declared the winner of the Saturday, July 16 Osun guber poll, scoring 403, 371 votes to defeat his closest challenger and incumbent Governor, Mr Adegboyega Oyetola of the All Progressives Congress, APC, who polled 375, 027 votes.

In his acceptance speech after receiving the certificate at a brief ceremony held at Osun INEC head office in Osogbo, Adeleke dedicated his victory at the poll to the memory of his late elder brother and former Osun State governor, Senator Isiaka Adeleke and the people of Osun state.