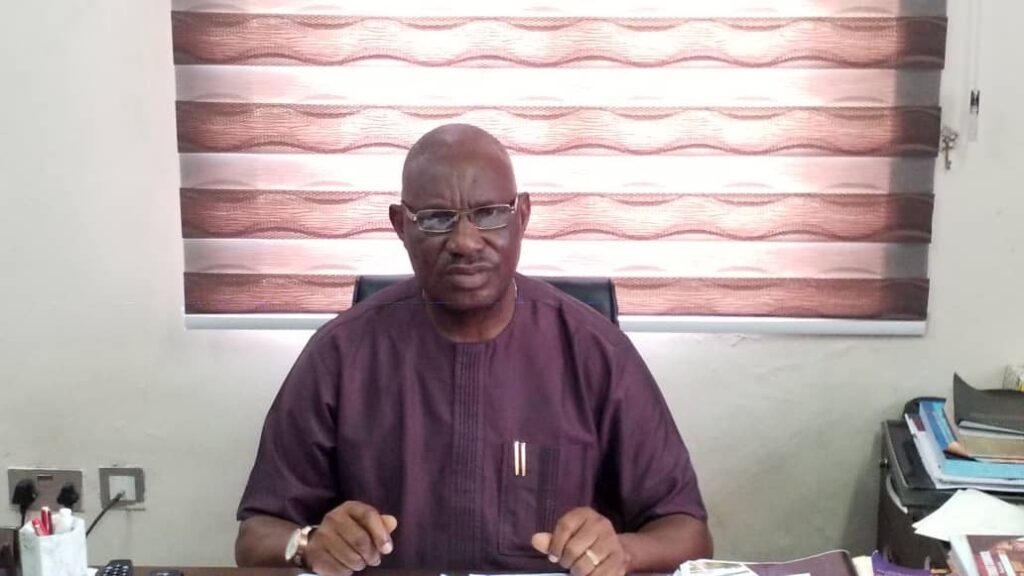 Chief Press Secretary to Governor Ifeanyi Okowa of Delta, Mr Olisa Ifeajika has described Chief Kenneth Gbagi’s recent allegation against the Gôvernor and his wife over his travail at the court as overtly malicious and a blackmail.

Addressing journalists at Government House, Asaba, the governor’s spokesman said that Gbagi’s allegation that Okowa and his wife, Edith, influenced the guilty verdict on him by a Warri High Court in a suit instituted against him by his workers was lamentation of a drowning man.

The court presided by Justice Vera Agbodje found Gbagi, a former junior minister in the Federal Ministry of Education, guilty of the allegation that he stripped naked, four of his workers – three females and a male in his hotel in Effurun, Delta.

In the suit by Victor Ephraim, one of the dehumanized staff, Gbagi was accused of using armed mobile policemen attached to him, to forcibly strip him and his female colleagues, some married after accusing them of not remitting money given to them by a guest.

The court indicted Gbagi, saying that the case presented by him was false and unbelievable, and he took laws into his hands by dehumanising the workers, amounting to an affront taken too far.

Ifeajika said that Governor Okowa and wife had no hand in Gbagi’s ordeal and urged him to seek the face of God and further approach the court of public opinion to clear his name from the heavy moral baggage.

“A few days ago, we read in the media of a court verdict that found a former Minister of State for Education and governorship candidate of the SDP, Chief Kenneth Gbagi, guilty in a matter that affects him solely.

“Chief Gbagi, a proprietor of a hotel had an issue between him and his staff. It was not political; it was not anywhere related to state matters. It was strictly a matter between an employer and employees.

“The case in question was celebrated when it happened in September, 2020 and some of us had forgotten about it but for this court judgement.

“People had forgotten that it was reported that for whatever reason he dehumanised four of his workers, a wife, a father and two other females. They were stripped naked and exposed to public glare.

“The victims sought redress in court and the court came out with a verdict, found Chief Gbagi guilty of not just infringing on the rights of these persons that were his workers but of dehumanising them and all that.”

He said that rather than put his head and face in shame and mud for the irresponsible act as seen by the judge, Gbagi resorted to character-assassination, accusing Gôvernor Okowa and his wife of paying the judge to come out with the verdict.

“I am sure that to the ears of everybody, it is absurd and it isn’t worth responding or reacting to but for one obvious reason and that is the character involved.

“We don’t know where the workers that took him to court come from but we know that wherever they come from, we don’t have any record anywhere that they have any relationship even remotely, with the governor and his wife.

“Nothing can be traced to say that they have a relationship that perhaps may have pricked the interest of the first family in the matter.

“So, for Chief Gbagi to have looked that way in finding whatever he thought happened to him is to say the least the zenith of treachery and malice.

“He claims to be the foremost industrialist in Delta; yes, we have seen how industrialised his local government, Ughelli South, is and how much he has shown presence by way of industrialisation of his Oginibo community.

“The only thing we know that he has done is owning a hotel and that same hotel he chose as platform to torment his workers.”

The governor’s spokesman said Chief Gbagi couldn’t have said that he was goaded or nudged in anyway to do what he did.

“He took on his staff at his own volition. He thought it wise that that was the proper thing to do, but in the eyes of the public it was a horrible scene to have come not just from a man like him but from anybody for that matter.

“It is ridiculous to blame Okowa for his woes. He claims to be popular and powerful but he couldn’t use his power to develop his Oginibo community, Ughelli South or Delta but he used it to take on helpless and hapless youths whom he had under his employ debilitatingly.

“If Kenneth Gbagi is popular, Governor Okowa is not in a popularity contest with him. Gbagi is struggling to be a governor and I wonder the kind of governor he would make with this kind of wickedness.

“So, for Gbagi to have tried to drag Okowa into his predicament, it leaves us wondering because the governor is not in contention in any matter with him.

“It is said that when you fetch ant-infested fire wood, you should face the repercussion because the ants will turn against you, and that’s exactly what has happened in this case,” he said.

He added that Gbagi left the PDP because he knew he stood no chance of winning the party primary but tried to blackmail the governor for being behind his exit from the party.

“Chief Gbagi we know was a member of PDP and an aspirant in the party and when it pleased him, he left to join another political party where today he is the governorship candidate.

“We thought that should be enough assignment and engagement for him and, but unfortunately, for his own actions, he now has this baggage from the court, which has heightened his assignment.

“He should seek the face of God, and try to redeem himself in the court of public opinion where he has offended the sensibilities of people with what he did in 2020.

“Dr Ifeanyi Okowa, the Governor of Delta and by the grace of God the in-coming Vice-President of Nigeria is not in anyway in any class with Gbagi; the records are there.

“Okowa’s pedigree is known and acknowledged even beyond Delta; what he has as CV are impeccable by all  evaluations. I don’t know what value Chief Kenneth Gbagi has to show than blackmail, treachery and mischief.

“This is not the first time he is into this; he had in the past tried to blackmail the governor by telling Nigerians through the newspaper too, that the Governor’s father, while alive, told the governor and one other prominent Deltan in a meeting that the governor should ensure he (Gbagi) succeeds him in 2023.

“That was a big blackmail. Pa Okowa had died by the time he came up with that story and anybody who knew the late father of the gôvernor knows that he couldn’t have given such instructions.

“Those are some of the stunts that a Gbagi can pull. He had tried so many times in other ways of blackmail. You can recall that some months ago, he alleged that he was denied access to a meeting inside the government house on the orders of the gôvernor. One of his mendacities.

“He said Okowa denied him access to the Government House, yet that’s the place he goes in and out freely and used to gleefully boast about it.

“So, his reaction to the court judgement is not new; it is his stock in trade, he’s a serial blackmailer.

“Gbagi should take his destiny in his own hands and if he wants to be noble, he should watch people who live in nobility. He should tread the path of honour, keep a clean hand and do what others do to attain heights.

“Gbagi should shun treachery, mudslinging and avoid blackmail because nobody goes far in life with those traits.

“Senator Dr Ifeanyi Okowa is a peaceful man, a praying governor who abhors injustice, who does not like people being treated shabbily. But, unfortunately, Chief Gbagi thrives in all of these.

“Gbagi likes the turf that are crooked, and inflicts pain and injury on people; we leave him to his fate but we advise him to let the first family be and for whatever his ambition is in life he should go about it in his way and let’s see how far he will go in treachery, blackmail and all the vices that he dorns.

“He should go and make peace with his workers that he has offended; that is the best way to go and not drag innocent people along in his hard times that he is experiencing. He attracted the problem himself and he should face it like a man and not drag other people along,” Ifeajika stated.