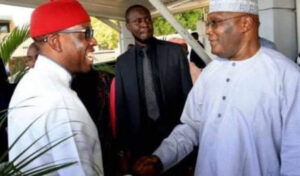 Alhaji Atiku Abubakar (right) in handshake with Dr. Okowa, his new running mate for the presidential election in 2023.

Debunking the claim that he rejected Governor Wike, Atiku said: “I didn’t reject Wike, I picked who can deliver. Wike is brilliant and tenacious.”

He continued: “There was no voting. I can give you the copy of the report of the committee. The committee that presented the three nominees was chaired by the Governor of Benue State, Samuel Ortom. They  recommended three people, so I picked one.

“It is my prerogative to choose who I think is the best for me to work with as my VP. And I have consistently been picking Igbo to unify the country.

“People should be fair to me and state the facts. What Ortom said to the public was inaccurate,” he said.

Atiku pointed out that PDP did not agree to microzone its presidential candidacy to any geopolitical zone, and that the main party would resolve its internals matters soon.