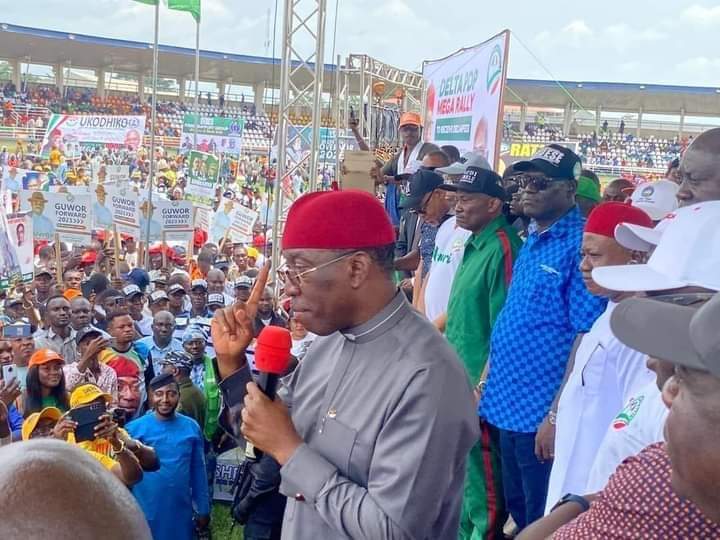 Delta Governor and Vice-Presidential Candidate of the Peoples Democratic Party (PDP), Senator (Dr) Ifeanyi Okowa, said the party’s victory in Osun governorship poll was a pointer to its readiness to rescue the country from mal-administration and government insensitivity.

The governor stated this while addressing PDP faithful at a mega rally at Ozoro, on Saturday, and affirmed that PDP remained the only party that could return Nigeria to better days.

He assured that contrary to insinuationons in some quarters, PDP was strong, virile and united in the state, adding that what was playing out was democracy-in-action.

“I am glad that some of our friends have come to join us in this revolution to rescue Nigeria.

“The victory of our party last week Saturday in Osun is just the beginning of the revolution to rescue Nigeria and to return us to the path of growth.

“In the last seven years, it has not been too well with us as a nation, but we know that God has come to our rescue and it’s just for the PDP to take it and run with it; that sign has already started with our victory in Osun.

“Last Saturday, you listened, you watched and you waited for the result in Osun S. We went to the heartland of the APC in Yoruba land to make a statement and to God be the glory.

“They did not give PDP a chance; the APC thought it was a done-deal but God showed His mighty hand and when the results started coming, it was unfortunate for the APC.

“That is just the beginning and I must thank Nigerians who have come to realise that something has gone wrong and that we need rescue and there is only one party that can rescue Nigeria as at today and it is the PDP,” the governor said.

He pointed out that PDP was the only party with the most experienced candidate and urged Nigerians to support the party’s rescue mission.

According to him, when you look at all the persons they have brought out, you can see the distinction; we need a man who is calm with a lot of experience; somebody who knows what to do from day one.

“And, if you look at it very well, only one man fits the bill and that’s why we are talking about the ‘Atikulate Revolution’.

“I heard some people saying that PDP is dying in Delta State and I wonder why they are deceiving themselves.

“We are not boasting but on the day of election, our people will come out and vote and in the next election we are going to win all available seats – from the Assemby to the Presidential.

“Whatever is going on in the party today is a normal democratic process; so, there is nothing to worry about, no cause for alarm and no cause to fear,” he stated.

The governor thanked PDP’s presidential candidate, Alhaji Atiku Abubakar, for nominating him as his running mate, and assured him that Deltans would support the Atiku-Okowa ticket.

“We thank God that a very experienced presidential candidate Alhaji Atiku Abubakar, picked one of your own as his running mate and we give God the glory.

“2023 is about the youths and women of Nigeria and we cannot continue to suffer and stay hungry. We must definitely move forward,” he stated.

Welcoming party faithful earlier, the state’s Chairman of PDP, Chief Kingsley Esiso, said the primary purpose of the rally was to receive defectors from other parties.

He said that Nigerians could no longer tolerate a party that had divided Nigeria along ethnic, religious and regional lines.

“People are hungry and angry, and in the midst of that, APC showed its desperation and insensitivity by coming up with a Muslim-Muslim ticket.

“In Northern Nigeria, Christians constitute no fewer than 40 per cent of the population, yet APC said they couldn’t find a Christian to be vice-presidential candidate.

“Nigerians will not answer them, we will wait till 2023 and answer them with our votes using our PVCs.

“Our people have seen with their eyes what Governor Okowa has done in Delta,” he said.

On the governorship tussle in the state, Esiso urged party faithful to remain calm, adding that INEC had asked stakeholders to maintain calm until the entire court processes were exhausted.

“As the state Chairman of this great party, it is my responsibility to educate our people on developments in the party.

“Some weeks ago our party conducted one of the freest and fairest governorship primaries in Delta state and a candidate emerged and our party has dutifully submitted the name of that candidate.

“It is our responsibility to stand and defend the outcome of that primary. The issue before the court has nothing to do with the integrity and credibility of that primary.

“By the action of INEC yesterday(Friday), we have been told in PDP to wait patently for the outcome of the court judgement,” he stated.

The rally was attended by, Minority Leader of House of Representatives, Chief Ndudi Elumelu, Speaker of the state’s House of Assembly, Chief Sheriff Oborevwori, among others.

The defectors to the PDP, who were in large number were led by Chief Fred Obe and his Grassroot Unity Movement; Chief Solomon Omene, Chief Gladys Agba, Amb. Nwaham Iwendi and APGA State Secretary, Chief A.T. Okrakpo among others.

They apologised for contributing to the emergence of a tyrannical party in APC and pledged to be part of PDP’ rescue mission.