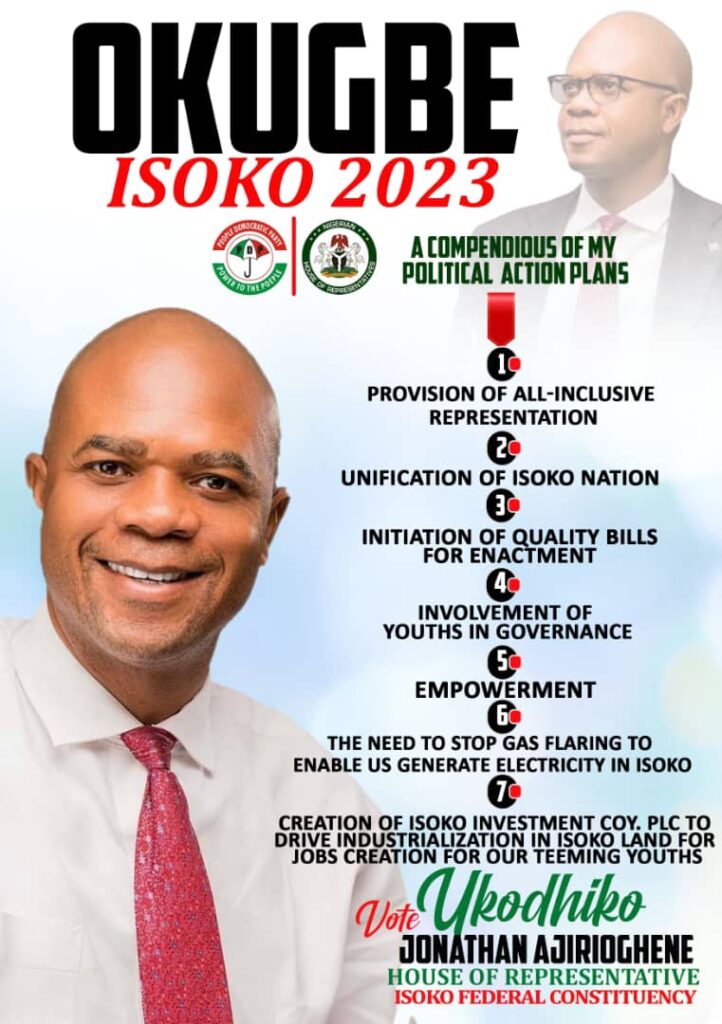 PERSPECTIVE – 2023: Ukodhiko and the imperative of purposeful representation

The 2023 general election is fast approaching. And, for Nigerians another opportunity beckons to choose their next set of leaders and representatives to steer the ship of state from the rubble of neglect, backwardness, nepotism, grave insecurity and ineptitude in governance.

During twenty-three years of unbroken democratic rule since 1999, expectations were high that Nigeria, as the most populated black nation in the world, would march decisively to her well-deserved coveted seat in the comity of nations.

Ironically, however, the nation’s expected journey to glory turned out to be a march to folly and the glimmering hope of grandeur dimmed into thick darkness of gloom. Untold hardship, pervasive suffering and poverty have been the inevitable consequence, which has become the defining physiognomy of the continental giant Nigeria would have become. The situation keeps worsening by the day, especially in the last seven years of the rudderless All Progressives Congress (APC) leadership at the centre.

With depreciating human development index and the country having the misfortune of being ranked as third worst-governed nation in the world in the new global good governance index in 2021, there is little to cheer about.

The continent of Africa is generally picking up economically and accounting for six of the world’s ten fastest growing economies in 2018, according to the World Bank. Sadly, Nigeria was not among these upwardly mobile economies; and, she was simply dismissed as “still experiencing negative per capita income growth, weak investment, and a decline in productivity growth.”

Fortunately, Africa’s governments are beginning to develop the required infrastructure and institutions. Across the continent, efforts are underway to improve education and entrench a culture of innovation. Moreover, many political leaders are implementing reforms aimed at improving business conditions in their respective economies.

According to the World Bank’s 2019 Doing Business Index, five of the 10 most-improved countries are in Africa, and one-third of all recorded reforms occurred in Sub-Saharan Africa. Yet, Nigeria is nowhere to be found! The Federal Government is doing practically nothing to speed up international trade and unlock investment and growth benefits especially with the concentration of the nation seaports in Lagos alone.

There is the general belief that Nigeria has been where it is because there have been no leaders and, as Harry S. Truman, one-time President of United States of America said, “Without leaders, society stands still. Progress occurs when courageous, skillful leaders seize the opportunity to change things for the better.”

It has become imperative for all who love Nigeria to put all hands on deck, to join the Peoples Democratic Party (PDP) in its avowed mission to rescue the nation from the rubble created by the inept APC government in the last seven years.

In the rundown to the primary election for the Isoko Federal Constituency, one man, Pastor (Engr) Jonathan Ajirioghene Ukodhiko, sought to represent the Isoko people as the tenure of the legendary Rt. Hon. Leo Ogor, a former Deputy Majority Leader and Minority Leader of the House of Representatives draws to a close.

Ukodhiko emerged winner of the most keenly contested primary election in the history of the Isoko nation and, perhaps, in the entire Delta State because of the calibre of aspirants in the contest. They were all qualified to wear the big shoes currently adorned by Leo Ogor.

Ukodhiko is honed with a vision to give efficient legislative representation and strive to reposition the Isoko ethnic nationality in mainstream national politics, and to attract good and fair deal for the Isoko Federal Constituency in the Nigerian project.

With a redemptive mission to work diligently and deliver on his legislative responsibilities of lawmaking, Ukodhiko is poised to initiate Bills and sponsor motions that will not only articulate the hopes and aspirations of the Isoko people but to help consolidate on the nation’s democracy and to also deliver abundantly, concrete dividends of democracy to our dear constituents, the good and supportive people of Isoko Federal Constituency.

For instance, Ukodhiko envisions an Isoko transportation sector that is viably sustainable through Private Public Partnership, which will rapidly but positively transform transportation in Isokoland. It shall entail the provision of tricycles, taxi cabs and mass transit buses.

As an astute entrepreneur, it is the vision of Ukodhiko to ensure establishment of industries in Isoko-land and ensure that they are well funded and positioned to provide thousands of job opportunities for our unemployed people, particularly the teeming youth.

Because entrepreneurship is the way out of poverty and unemployment in developing countries like Nigeria, Ukodhiko intends to utilise existing Skills Acquisition and Vocational Centres/ Entrepreneurship to train our gifted and talented youths with requisite skills to make them become not only wealth creators but employers of labour as well. No doubt, this in the long run will improve the socio-economic prosperity and transformation of the people and the area.

Speaking at an event recently, Engr Ukodhiko stated, “My vision is simply to offer quality legislative representation and reposition Isoko nation in mainstream and national politics that will ensure our people of Isoko Federal Constituency benefit more from the Nigerian project.

“Specifically, I have mapped out strategies that will ensure the industrialization of the Isoko nation by encouraging investors and entrepreneurs that will invest massively in Isoko nation by establishing industries and factories that will see to the creation of empowerment and employment opportunities for our teeming people.

“It is very possible to have an Isoko Investment Company like the Oodu’a investment companies in the Yoruba axis in the South-West geopolitical zone of Nigeria.

“This initiative is prime in my heart as I am already devising strategies on how to to meet with Isoko sons and daughters who have made it economically, to team up and float the Isoko Investment Company that I strongly believe will see to the sustainable economic growth of Isoko Federal constituency,” Ukodhiko added.

The PDP candidate for the House of Representatives, Isoko Federal Constituency, has assured that if elected as a representative of the Isoko people in the National Assembly in Abuja, he will ensure the Isoko Development Union (IDU) and our highly respected traditional rulers enjoy a pride of place as they would remain central to his engagements in the House of Representatives in Abuja. He will engage presidents-general of communities to ensure that only projects of concrete economic value to the people are attracted to such communities.

To our dear Isoko people, therefore, one would say, behold your son! A professional engineer, astute businessman of international acclaim and a minister in the temple of God; a loving and caring family man, a philanthropist of great repute; Engr. Pastor Jonathan Ajirioghene Ukodhiko. Let us vote him all the way as the PDP candidate for Isoko Federal Constituency come Saturday February 25, 2023 as our Representative, to ensure effective representation of the Isoko people as enshrined in his manifesto.

A vote for Ukodhiko is a vote for a new dawn in Isoko nation.