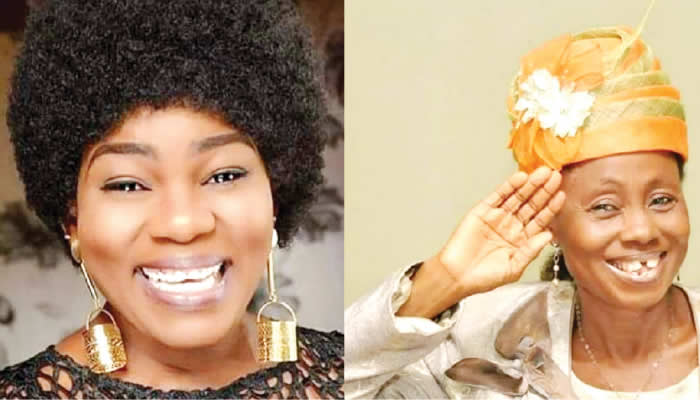 PERSPECTIVE – Ameh and Onayiga: Strong women who defied the odds

They were two public figures and television stars. Adah Obande Ameh openly admitted she had mental health challenges. Sola Onayiga had a health challenge from onset that ordinarily would have kept her inactive.

Despite such challenges of life, these multi-talented artists worked hard at their profession, helping to raise the bar of performance in the theatre and on television. It is amazing that ladies with such life-threatening challenges which in the first place were not their making, could push aside these odds to bring laughter to television audiences in the country, making Nigerians smile and laugh despite our political and socio-economic challenges.

Sola Onayiga, nee Awojobi, who in the early 1990s had stage performances in the country and Europe, was the popular Ireti also known as ‘Catering Practicals’ or ‘Kitchen Practicals’, the sophisticated lady with crazy cuisine in the incredibly popular television series Checkmate. In the series, Ireti was one of the wives of the polygamous Chief Fuji who had many children and ran a cacophonous home. Checkmate created by the late Amaka Igwe, was rested in 1994. But so popular was the Fuji segment that it became a very popular spin-off called Fuji House of Commotion.

I met Sola Onayiga around 1980 when we were both in the Drama Department of the then University of Ife, UNIFE, now known as the Obafemi Awolowo University, OAU. The Department and the UNIFE Theatre Company, personally supervised by Professor Wole Soyinka, was quite tasking. The stage performances which were preceded by quite strenuous rehearsals were physically exhausting. This was where Sola excelled and very few of us at that time knew she had health challenges because she made no excuses as she strained herself to be a good professional.

On the importance and centrality of the stage in comparison to radio and television productions in which she also excelled, Sola was to say: “When you are a stage actor, you can do well anywhere because you are the master of all; you can memorise your lines , read and understand fast. Stage play does not give the chance to redo what you have done like screen acting; you go live immediately.”

After Ife, we came to Lagos where I veered into journalism and trade unionism, while she continued in the theatre, emerging in the pre-Nollywood era as a leading thespian. Even after becoming a public figure, Sola, like a doting sister, looked out for those of us who were with her in Ife. Whenever we met, she would publicly embrace me and announce to her colleagues that I am actually a fellow thespian but on loan to journalism. She also introduced me to her husband, Mr Kanmi Onayiga, a former journalist.

Restless Sola could be full of surprises. So in 2015, she veered into partisan politics running for a seat in the Lagos State House of Assembly on the wings of the Social Democratic Party, SDP.

Although Nollywood with Sola as a pioneer has grown into an average 2,500 per annum production industry, she did not think the industry should be an all-comers affair. “I started from the stage before going to school. When you don’t have the knowledge of what you are doing, you will go the wrong way. Some learn on the job, and some attend school before, but you have to be trained,” she said.

On Monday July 18, 2022 a mutual friend and fellow thespian, Edmond    Emuesiri Enaibe shocked me with a message: “Aunty Sola has gone home to rest. Finally. She lived life. She surprised many with her love for life. Sola was the quintessential artiste who found joy in performance; whether on stage or in front of camera. Never satisfied with one role interpretation, Sola pushed the limits to BE the role she plays.”

In her own case, Ameh started her onward journey to adulthood on quite shaky foundations: she got pregnant at 13 and gave birth at 14. The conclusion was, it was God’s gift: so the child was named Aladi Godgift. But this challenge which arrested her educational pursuit did not stop her strive to be successful in life. In 1995, she turned to the theatre and the following year, featured in the movie, Domitila, which pushed her into the limelight. She went on to do some 30 more movies, including King of Shitta, A Million Baby, Ghana Must Go and Oloture, a 2019 crime drama on human trafficking.    Perhaps the job that gave her the greatest visibility is the running television series, The Johnsons, in which she played the matriarch, Mrs Emu Johnson, the semi-illiterate but street wise “Original First Lady” married to a scientist with a mercurial temper.

Ameh’s preferred genre was comedy, but tragedy did not seem to be too far from her real life. By 46, she had lost three brothers, her father and three sisters with each sister leaving behind three children apiece.    The death in 2018 of Ajuma Ameh, her younger sister, a footballer and Assistant Coach of the Under-19 Female National Team, seemed the most devastating to her. She said of it: “After she died, I thought I was going to be the next.”

But the worst was yet to come and nothing could have prepared her for a more devastating tragedy. On October    20, 2020 her only child with whom she grew up like a sister, becoming her gist partner and confident, departed. It appeared she could take no more. She said of Aladi Godgift’s death: “ I just saw my world crumble before me.” The strong lady battled to keep afloat in the ocean of tragedies threatening to drown her.    Depression set in. But with the help of doctors, friends and a very supportive Nollywood tribe, she fought so well that she continued to be boisterous, bringing laughter to audiences across Africa in The Johnsons.

Ameh advised all those with mental health issues not to live in the closet, but seek medical assistance and go on with life. She said in a television interview: “Some people say they want to commit suicide and I ask them why? After burying seven family members, and my daughter became the eighth, you know what that means? I have died a thousand times.”

Ameh revealed a company had sued her for a large sum of money for not delivering on a job due to her state. In those trying times she plunged herself into work and remained quite humorous.

On Sunday July 17, 2022, Ameh at 12.53pm made a post on her  Instagram  page at lunch in Warri while visiting a family. She was her usual boisterous and jovial self. She suddenly collapsed at 11pm. Before help could reach her, the strong lady was at Heaven’s Gate.