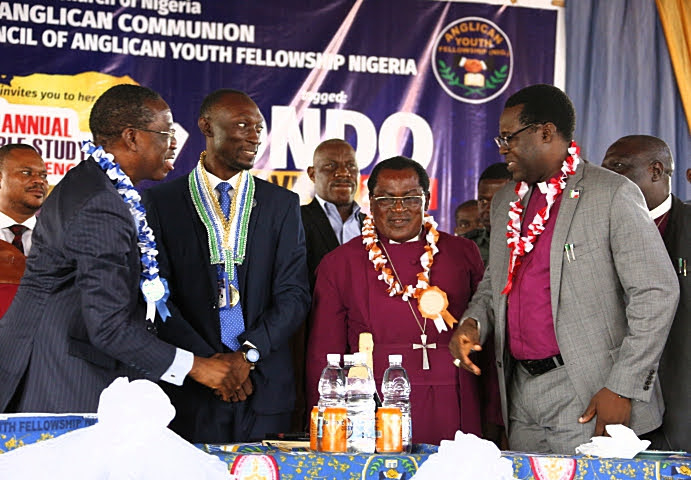 Presidential Candidate of Peoples Democratic Party (PDP), Atiku Abubakar, on Thursday, said Nigeria would continue to grapple with its current challenges unless it was restructured.

Represented by his running mate and Governor of Delta, Sen. (Dr) Ifeanyi Okowa, Abubakar who was Special Guest at the occasion, said Nigeria was in dire need of knowledgeable, capable, and experienced leaders who would break the cycle of failed leadership and take the country to the level of growth and prosperity.

He said that devolution of powers and resources to the sub-national governments, and the guaranteeing of a constitution that allowed equity, justice for all and inclusiveness in governance such that none was left out or oppressed, was what was needed for a proper federal structure.

According to him, Nigeria should continue as a Federation but not in its present form.

He said “I advocate a proper federal structure that recognises the federating units and the federal government as mutually coordinate and not subordinate one to the other, yet cooperative among themselves, distinct from the current structure where states exist as mere appendages of the centre.

“I am particularly thrilled by the theme of this conference – ‘Be Strong and Courageous’ because the times we live in call for men and women of courage who will stand up to be counted in the battle to rescue and rebuild Nigeria.

“There is no gainsaying the fact that Nigeria’s unity is under serious threat today. The mutual suspicion, distrust, and sometimes hostility among the various ethnic groups have reached levels never experienced before, fueling separatist agitations across the country.

“This is largely due to the general discontent occasioned by the broken promises, dashed aspirations, and the lopsidedness in power-sharing under the current federal government.

“As I said sometime ago, a situation where the top guns in the nation’s security architecture are dominated by persons from a particular ethnic/religious group does not augur well for the unity and progress of the country.

“Nigeria can only grow if ethnic, religious and tribal divides dissolve, and a pan-Nigeria goal is truly desired and embraced by all. We must act swiftly – and decisively – to calm the raging storm, regain confidence in the Nigerian project, and halt the drift toward chaos and anarchy.

“The forthcoming 2023 elections offer us the opportunity to do the needful and move Nigeria in the right direction. It calls for sober reflection and strategic thinking as against the mindless euphoria, sensationalism, and herd mentality that brought us to where we are today.

“Going forward, we need mature, wise, and experienced leaders who will inspire hope in our country and foster a sense of belonging among all Nigerians.

“I am an ardent believer in the restructuring of Nigeria, especially as it relates to fiscal federalism and devolution of powers.

“Restructuring does not mean we jettison the federal system of government. In fact, I believe that it is more functional and realistic for our ethnic, linguistic, religious, and cultural diversities.

“I guarantee you that the states and Nigeria will develop faster when the proper federal structure is put in place.”

The former vice-president assured that if voted as President in 2023, he would prioritize education in the country as no nation could develop beyond the knowledge-base of its citizens.

He recalled that the great late Nelson Mandela had said that “education is the most powerful weapon which you can use to change the world”, and said “you can, therefore, imagine my pain and grief to see students of our tertiary institutions idling away at home when they should be in school.

“It not only distorts the academic calendar, it also robs the parents and the students of their hope for a better future.

“I wish to use this opportunity to respectfully call on the Federal Government to urgently reach a compromise with striking university lecturers and reopen our universities.

“No nation can afford to have its students to be idle or roaming the streets and expect to achieve peace, security, and inclusive economic growth.”

He called for the harnessing of the creative energies of the youth to accelerate national development by providing them with a solid educational system that equipped them with the right skills-set and leadership credentials.

“As a corollary to the above, Nigeria needs a well thought-out policy to tackle youth unemployment through skills training and entrepreneurship development programmes.

“The army of the unemployed in our country is a recipe for disaster. To get out of the current quagmire, we must as a matter of urgency begin to think more in terms of equipping them with the technical know-how, vocational skills, values and resources to become job and wealth creators, as well as giving them employability skills.

“We must be intentional, determined, and resolute about this to avoid a situation where graduates from our educational system roam the streets in search of non-existent jobs,” Atiku stated.

Welcoming guests earlier, National President of Anglican Youth Fellowship (AYF) Nigeria, Mr Alex Akpata, said Nigerians were faced with serious security and economic challenges, but urged the youths to be strong and courageous as the nation would soon overcome its challenges.

He urged the young persons to join politics and stand firm in voting for candidates that would protect the interest of the people.