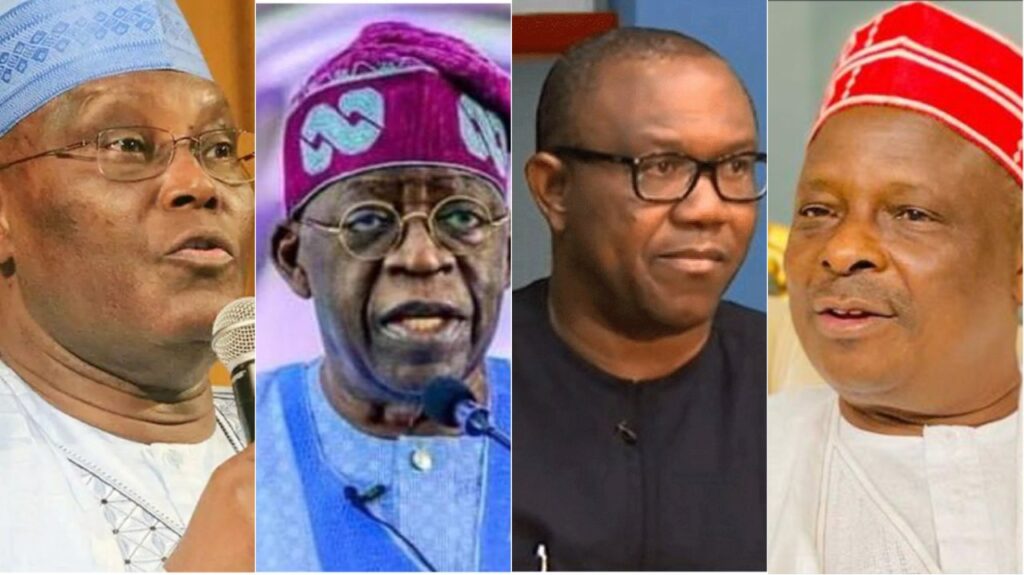 With presidential campaigns commencing end of next month, Nigerians are justifiably worried that the candidates are more engrossed in petty matters than generating and debating the big ideas that could pull the nation back from the cliff. Why are the candidates so bereft of creative, sophisticated and intellectual solutions on the problems besetting the country? Why are the three major presidential candidates – Peter Obi; Abubarkar Atiku and Bola Tinubu – incapable of presenting thought-provoking and stimulating programs on the major issues of the day? Our presidential campaigns have never been this sparse in big ideas. In 1979, Chief Obafemi Awolowo floated his party’s four cardinal programs that included free education at all levels and integrated rural development. He also planned to banish serving coffee and tea in government offices to cut costs. These ideas sounded quite revolutionary and resonated easily with a lot of the voters, especially university students. Buhari’s anti-graft agenda was the first time a candidate brought the issue of corruption onto a presidential platform.

Although religion and ethnicity are the dominant criteria we use in assessing political leaders, I can confirm that there are many Nigerians that would be better persuaded by a candidate’s noble of plans. So far, those plans are yet to be unveiled. While Peter Obi routinely churns out false statistics and struggles to articulate his ideas, Atiku only harps on unity as his main policy thrust. Tinubu said a word about his plan. That talk of recruiting 50 million youths into the army and feeding them with agbado (corn) and cassava is sheer stupidity. Maybe he is yet to get over the many controversies surrounding him.

To help our presidential candidates develop quality policy agenda, I have identified five key areas that matter most to Nigerians. It would be helpful to read what the candidates plan to do about them.

Insecurity: Rising insecurity appears to be the most challenging problem facing the country, more so because it is the major cause of other problems the country is grappling with. First, I expect the candidates to speak to the different dimensions of insecurity such as terrorism, kidnapping and other violent crimes across the country, and explain in details their strategies for confronting them. A candidate ought to show a deep understanding of the terrorists’ activities in the country. For example, do the presidential candidates appreciate the extent of the presence of ISWAP and other terror groups in the country, and the extent to which some people in government and the armed forces are sympathetic to them? Is it true that the Islamic fundamentalists that have ravaged the nation in the last several years had derived some comfort from the presence of a Muslim in the State House? Will the election of another Fulani, for example, stoke them further, as many are suggesting? Does any candidate understand the involvement of highly placed persons in the kidnapping and illegal mining businesses?

Education: The closure of public universities in the last five months is one of the greatest failures of the Buhari administration, and it is so sad that none of the three candidates has presented any proposal on how to tackle this problem. Even when the Presidential candidates are being interviewed, our journalists seem less interested in probing the candidates on how they would handle ASUU and university funding in the face of dwindling government revenues. Atiku Abubarkar and Yusuf Datti Baba-Ahmed (Peter Obi’s running mate) own universities. How would this, for example, affect their overall perception of the crisis in that sector?

Economy: There are many economic problems the next President will have to deal with earnestly: fiscal crisis, mounting debts, poverty, unemployment, crude oil theft, oil subsidy, inadequate infrastructure and poor electricity. In addition, economic diversification, manufacturing and food production will require his attention all year round. Note that I have not included Naira’s exchange rate as our problem. It is rather a symptom of what ails us. The President’s ability to understand the complexities and interconnectedness of these problems will help in the manner resources are deployed to tackle them. I expect the candidates to have a good grasp of these issues and articulate them in a very engaging manner. Each presidential candidate should therefore be surrounded with a team of economic advisers.

Corruption: For me, there is no greater threat to Nigeria’s existence than corruption. In whatever form it occurs, whether in the form of outright theft as perpetrated by the former Accountant General or in the form of crude oil theft, corruption is steadily sucking life out of Nigeria. Unfortunately, two of the three candidates do not have a good reputation in terms of their attitude towards public resources. I will therefore like to listen to Tinubu and Atiku speak on their plans on tackling corruption. We have heard enough about Peter Obi’s frugality and prudence in managing public finance, but what do we know of Atiku and Tinubu’s attitude to corruption and abuse of office?

Restructuring: I personally do not have any reservations about restructuring the federation, apart from my objection to a suggestion that states be collapsed into regions as some proponents of restructuring argue. I do not think that restructuring is the silver bullet that would solve our problems. I believe that we need additional police force (State Police) to augment the federal police. States should also be given powers to generate and distribute electricity. I am however eager to hear the views of the candidates on restructuring? Fiscal federalism and resource control?

With so many problems to deal with, it is paramount that we subject our office seekers, especially the presidential contenders, to adequate scrutiny to gauge their mental acuity and physical health. I watched the debates among the main contenders for the Conservative Party Leadership in UK a few weeks ago. I have watched all the US Presidential Debates since 2000. It is also part of the pollical cultures in Germany, France and other developed nations to examine the programmes of candidates in detail through interviews and debates. This is therefore the moment for the media to subject Tinubu, Obi and Atiku to thorough examination of their agenda, background, attributes and preparedness for the job.