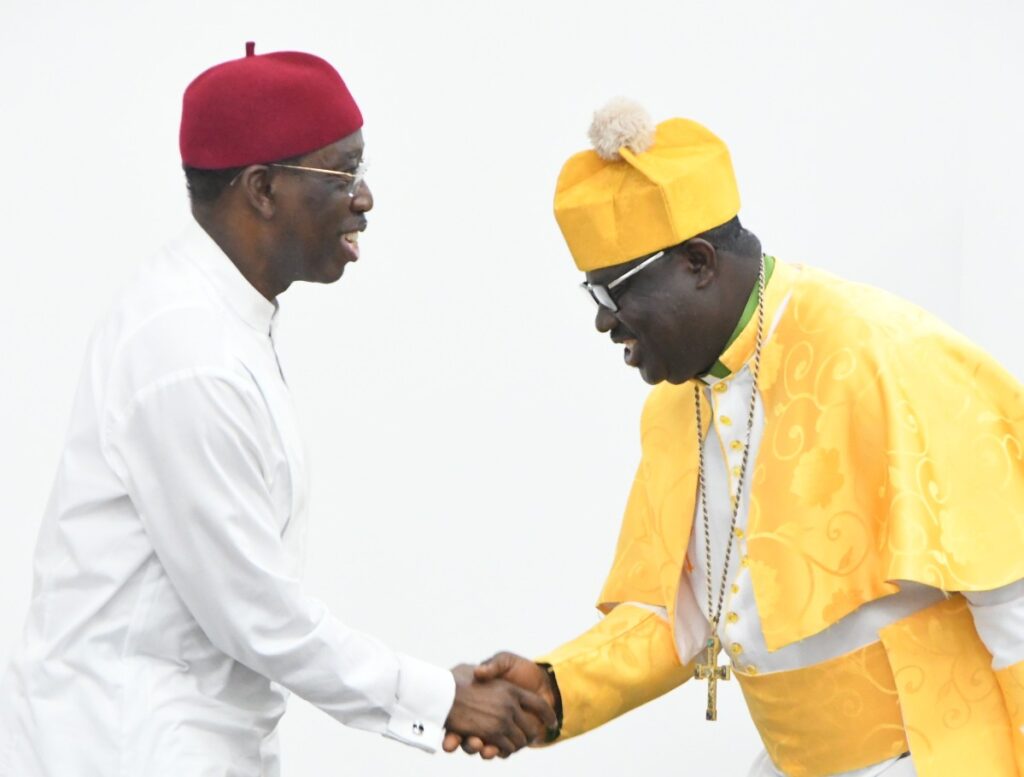 Gôvernor Ifeanyi Okowa and Vice-Presidential Candidate of Peoples Democratic Party (PDP) has urged Christians to pray for “recovery” and unity of the country, and not allow political intrigues to pollute the Church and divide it.

Okowa made the call on Friday when he received leaders of South-South Zone of Christian Association of Nigeria (CAN) led by Archbishop Israel Ege at Government House, Asaba.

He said that the time had come for Christians to go on their kneels and seek divine direction in the choice of the nation’s leaders that would emerge in 2023 rather than succumb to distraction by politicians.

According to him, it is my prayer that the church will continue to lead us in prayers and we need to be a little cautious as a church.

Okowa said “I am saying this because from the conversations I am beginning to see, I want to be sure that the church will not because of politics divide itself.

“The church in itself must be very prayerful that the will of God be done in 2023. We may have our individual preferences but we must be cautious about the unity of the church.

“Although we are traumatised as Christians but we must be careful not to, because of that trauma, take decisions that may not actually be the will of God.”

While attributing the successes of his administration to grace of God, the governor pledged to continue to synergize with the church in piloting the affairs of Delta and in his future endeavours.

He advocated for constitutional review to pave the way for devolution of powers, especially giving more powers to states to establish their own police outfit as a way to tackle insecurity, pointing out that the nation was in perilous times.

The governor also stated that it was time for the re-building of the nation by giving all segment of the society a sense of belonging in the scheme of things.

He frowned at the continuous stay of tertiary institutions’ students at home due to industrial action by teachers and other workers, emphasizing that drastic steps should be taken to pull the nation out of economic quagmire, worsening insecurity and other heinous crimes taking place in all geopolitical zones of the country.

“Whatever thing that we have seen in the last seven years, I believe that God has allowed it for a purpose. I believe that there are lessons to be learnt.

“As at today, there is so much insecurity; the economy is going really down beyond what you think and know. Most Nigerians don’t even know how huge these challenges are.

“With the things going on now in the Education sector, it’s not what anyone would wish for our country. We need to be very prayerful.

“The church must stay very prayerful and it’s a time for us as a nation to unite and find peace,” he stressed.

Okowa further said that “looking at the constitution of the security agencies, I think that there is a need to expand it. My principal, the Presidential Candidate of the PDP, Alhaji Atiku Abubakar, has always said that it’s not possible to police this nation with the Federal Government police only.

“It is not because of the situation of today but because of the peculiarities of this nation. We need to devolve power and resources to the states to ensure that they can run their own police force.

“If it were so, a lot of things going on at the moment would have been tackled, and so I believe that we need men who have experience to bring about the change that we need in our nation today.”

Earlier, the leader of the team, Archbishop Israel Ege, had said that they were in Asaba to thank the Governor for his support for Christians in Delta and the South South and assured him of their support at all times.

He congratulated him on his emergence as vice presidential candidate of the PDP and for his transformation agenda in Delta and charged him to remain a good ambassador of the church in his political career.

The cleric said that Satan was at war with the church through the use of Boko Haram to kidnap and kill Christians and persecution of believers, and called on Christians to redouble prayers for the nation.

Highpoint of the event was special prayer for the Governor, his family, the state and the nation.