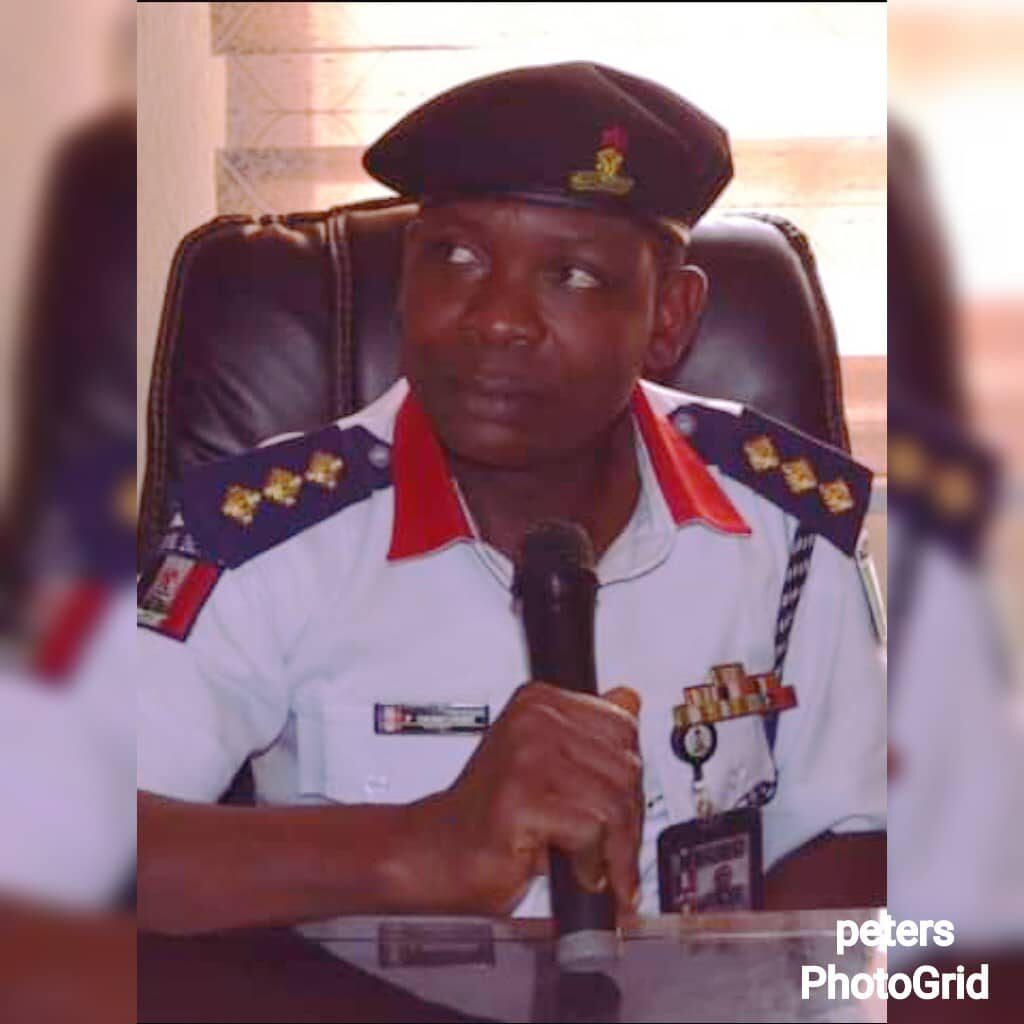 The Nigeria Security and Civil Defense Corps is a friendly, well trained, highly respected and well organized security agency of the federal government which prioritizes the welfare of the civilian populace as well as ensuring the protection of the citizenry and public infrastructure.

The Public Relations Officer of NSCDC Delta State Command, Dsc Emeka Peters Okwechime, stated this at the state headquarters in Asaba during the parade of two (2) suspects caught impersonating the NSCDC personel with the intention to extort unsuspecting members of the public of their hard earned substances, whilst in possession of dangerous weapons and causing public obstructions.

Dsc Peters identified the two suspects as one Mr Lucky Emofuoreta (m) 22yrs and Mr Goodness Osorochukwu Francis 25yrs (m) were caught red handed fully kitted on uniform similar to that of the NSCDC regalia, at about 2300hrs (mid night).

They were apprehended at an illegal checkpoint along Jedo Road in Okpe LGA of Delta State in the process of extorting money from the unsuspecting road users particularly truck and tankers drivers. An act which falls under the core mandate of the NSCDC.

Items recovered from the two suspects are:

(2) One handcuff, a pair of jungle both, two jack knife amongst other unlawful items

Meanwhile, on the complaints by members of the public regarding the issue of multiple checkpoints wrongly perceived to be men of the NSCDC, the State Commandant Akinsanya Iskilu Abiodun, has ordered the HOD Intelligence and Investigation to deploy plain cloth officers on routine patrol and surveillance across the state to fish out the identities of those involved, which had lead to the arrest of the two suspects following an intelligence tip off from men of the NSCDC.

Dsc Peters used the opportunity to reiterate that the multiple checkpoints on the roads are not NSCDC officials. The NSCDC operates within the law with total observance of the fundamental human rights of the citizenry and it’s officers conduct themselves in the best international practice and standards. The NSCDC, only mount and maintain strategic check points statutorily with NSCDC branded operational vehicles as part of the continuous efforts at mitigating or checkmating the menace of product diversion, adulterated products, crude oil theft and vandalism of national asset or installations in the state.

The public relations officer maintained that the NSCDC have sustained and maintained a robust relationship, synergy and mutual collaboration and cooperation with all sister security agencies in the state and has zero tolerance for crimes in pursuance of its mandate.

Dsc Emeka Peters, assured the public of the continuous efforts by the command geared towards the protection of life and property and to assist in maintaining peace and order in the state, pointing the ongoing Surveillance patrol exercise by personel of the corps across the state would be sustained. He urge the public to say something when they see something. Residents with useful information about a criminal activity should visit any of the 25 Divisional Offices, or the NSCDC Formations across the state and the state headquarters, Asaba. He affirmed that the suspects will be charged to court upon conclusion of investigation as a deterrent to other would-be criminals