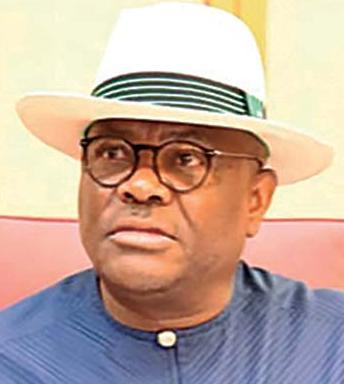 PERSPECTIVE – Wike’s escalating eccentric behaviour: What will cure the malady?

The presidential candidate of the PDP, Vice President Atiku Abubakar has cautioned PDP faithfuls to desist from making comments on the Wike saga in the party, so as not to jeopardise on going efforts at reconciliation. That is good. It is a language that should come from a statesman. Like Reuben Abati put it recently, you do not make a child cry and you don’t find a way to pacify the child.

But try as much as various organs and personages of the party PDP will, it seems that Gov. Wike is on a mission to sink the party. The latest news is that Vice President Atiku has scheduled another meeting with Wike this week. The first of such direct meeting was in London about a week ago. To put it mildly, that meeting achieved nothing as it produced no breakthroughs.

Wike seems to be emboldened by the crop of PDP governors and high profile persons that have flocked to his side. But whether he realises it or not, these persons may just be opportunists, who see through him an avenue to achieve something in the party. A few days ago, Commodore Bode George was in Rivers state, also lending his voice to the growing clamour that the National Chairman of the party, Prof. Iyorche Ayu, must relinquish his post, to bring peace to the party. There are other demands of what has now been known as the Wike group. Olusegun Mimiko, another Yoruba man wants to be the National Chairman of the party. Grapevine has it that he is the person favoured by the Wike group. Bode George perhaps knows as much, but he wants to be in the reckoning for that office, if the Wike osmotic pull, forces that eventuality.

About a month ago, Atiku Abubakar granted an interview to Arise television. Wike returned from a trip abroad and right at the Port Harcourt international airport, told the press that the interview granted by the presidential candidate of his party “were full of lies”. And the national tabloids carried banner headlines of Wike’s comments. As an ordinary Nigerian, I shuddered at that level of indiscretion and audacity. I screamed that it is time to call this man’s bluff.. But my friends cautioned me that Wike is aggrieved and he should be left to ventilate his anger.

But Wike has not stopped, neither has he let up. He has escalated his theatricals and verbal attacks on the party that made him and its VIPs.. He has held the party by the jugular and to ransom. That is because the party has acquiesced to endulge him. He ridicules every statement of top functionaries of the party. When the presidential candidate say that they are on a rescue mission, Wike fires back, “see people who are on a rescue mission”.
And the party continues to take it in its strides. Only as few days ago, he carpeted the National Chairman of their party, the PDP, calling him a prodigal father. Ha. And the party continues to bear. But for how long?

In Rivers state, where Wike bestrides the world of governance and headship of the party, he is a Czar. His party men and indeed indigenes of the state are in bondage. When he calls them out for his numerous weekly commissioning ceremonies, though not expressed, government functionaries must laugh in approval of whatever he says or does. When he clowns, they applaud.

Rivers state under Wike is akin to what happens in the highly repressed enclave of North Korea. When the father of the current president died, every North Korean that lined the streets were all seen to be wailing, even if they were faking it. It is the same way, if their president said any thing that demands laughter, all North Koreans must laugh. And this is a man who wanted to be president of Nigeria. His clownish dancing are to say the least, despicable. But Rivers state people must enjoy it. Unfortunately for him, this is Nigeria, not Uganda under Field Marshal Idi Amin. This is not country that an uncouth tyrant or despot can do drama with and have everybody enjoy his lunacy.

Now, why is Wike behaving this way? *After observing the trajectory of his oscillating virtuperations and comic displays since his ill-fated adventure to be the candidate of his party, and after he was bypassed for the position of Vice Presidential candidate in a pecking order, Wike is incrementally being confronted by the sheer magnitude of his loss.* The one that appears to be racking his head crazy, is that the man he snubbed in his nationwide campaign and consultations for the presidential ticket, also beat him to the Vice presidential slot. And the resources he committed was humongous.

Aside from that, he remembers that some of the people calling the shots now in the party were not there when life was almost snuffed out of the soul of the party some years ago and he was the “night nurse”.

There are three categories of Nigerians watching this PDP drama intently. There is the group that belong to “the enemy of my enemy is my friend”. They don’t like Atiku Abubakar or his pick for his Vice, Gov. Ifeanyi Okowa and they don’t like the PDP. So, whatever will sink both men and their party is hailed. That is why they applaud Wike and his antics.

There are those who see PDP as the party in waiting to occupy Aso Rock and they want to position themselves in the party and Wike is the hatchet jobber to bring that about. They now remember that the presidential ticket ought to go to the south and so on. They conveniently forget that all decisions of the party up to this point were openly and democratically taken and implemented.

Then there are those who feel that after everything had been done openly and democratically, sore losers want to bring the whole edifice down. They want the party to survive and replace the current party that has brought calamity and looming doom to the country.

And to be able to prescribe a remedial course of action, this later diagnosis is the prognostic path to seriously consider. Everything has been done patiently, up to this moment, to accommodate Gov. Wike. That is an admission that the party appreciates his worth and the group he now leads within the party. But for how long will the party continue to indulge him?

We have always been told that “party is supreme”. This was demonstrated in Osun state recently, where the party member who lost to Governor elect, Chief Olabisi Adeleke and has been in court to disqualify the candidate who has just won his election, has been expelled from the party, the PDP. Why is the PDP reluctant to wield the big stick in Wike’s case?

Let’s see what further concessions Atiku Abubakar will make to Wike and his group when they meet midweek, this week. Will Atiku sacrifice the National Chairman of his party at this critical time? If he does, will he produce the replacement or Wike’s group will? And this is the thorniest of the demands from the Wike camp.

If they cannot agree, will the party wield the big stick and expel Wike from the party? After all, it is obvious that he wants the destruction of the party and the loss of holders of the joint ticket as the appropriate reward that will assuage his badly bruised ego and sense of loss.

Atiku has crossed the Rubicon. He must know now that he will lose the election if the party continues with these distractions. If Wike remains intransigent and recalcitrant, then “party is supreme” mantra must be applied now. Wike should be axed and let whoever wants to go with him go. It is better PDP loses the February 2023 election with peace of mind and control of their party, than lose with all manners of _agberos_ struggling the steering with the driver. In Rivers state, Wike will learn sooner or later that the “Rivers votes” he erroneously thinks are his personal estate do not all belong to him.

As a parting shot, the comportment and deliberate, measured silence of the Vice presidential candidate of the PDP, Senator Dr. Ifeanyi Okowa Gov. of Delta State, on this matter, must be highly commended. He has been very presidential. The lack of such comportment is another line of dichotomy with the other fellow. Even the political parties that Wike have hobnobed with so far, while brazenly courting charges of Anti-party, will not want to harbour him too closely, as a party member. Wike must watch it because he will be the ultimate big loser, after all is said and done.

*WEMDI NWAHAM is a veteran journalist and he writes from Asaba.