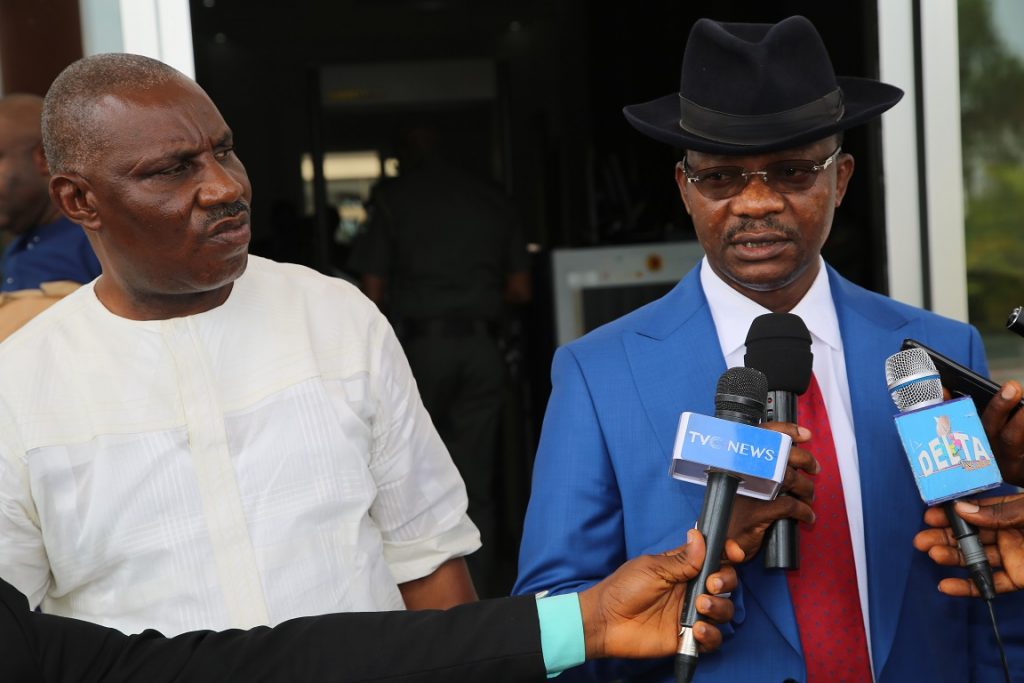 Delta Government has decried the deplorable state of some federal roads in the state and called on the Federal Government to take urgent steps to address the situation.

Addressing a news conference in Asaba on Wednesday,  the Commissioner for Information, Mr Charles Aniagwu, said that the deplorable state of federal roads across the country justified calls for devolution of power in the polity.

Aniagwu who was with the Chief Press Secretary to the Governor, Mr Olisa Ifeajika, said that the state government had spent enormous resources on interventions on federal roads but pointed out that some others had become dilapidated, without attention from the Federal Government.

He stressed that devolving power to component units would provide them more funds to undertake the task of infrastructural development of the states, including roads, that seemed to have overwhelmed the Federal Government.

“We have continued to intervene on federal roads in the state since 2015, and some of you have had cause to accompany us on inspection of these federal roads.

“You also know that we have intervened three times on the Eku-Agbor-Uromi road which is also a federal road.

“Not long ago, we wanted to start another intervention on the road but the Federal Government said the road has been awarded to a contractor and that made it very difficult for us to do what we needed to do,” he said.

The commissioner disclosed that the attention of the state government had been drawn to a viral video on a failed part of Uromi(Edo)-Agbor(Delta) road and said that it was a federal road.

He explained that the state government had intervened on two different occasions on the road.

“We were intervening on that road and other federal roads in the state until we were told by the Federal government that the job of the road had already been awarded to a contractor.

“The road has gone very bad to the extent that commuters are going through a lot of troubles on it and we have pleaded with the Federal Government to take another look at that road because it is in a very bad shape.

“You will recall that when we revamped the Agbor Technical College, we intervened on that road and we never asked for any refunds in these interventions.

“What has become a challenge is that the Federal Government has taken far more than they can deal with in a number of these projects and that’s why people have been calling for the devolution of powers to the component units.

“This is important because when you devolve power and allow the component units to tackle these issues it means that you will also have an adjustment in the revenue sharing formular such that states will have more resources to deal with some of these issues that affects our people.

“We are very very pained as a government that these federal roads are in a very terrible situation and commuters from across the country are actually going through hellish situation to travel through these routes,” Aniagwu stated.

“All the federal roads we have intervened have gulped several billions of naira and we are not even going to ask the federal government to refund us because what we did was to remedy the situation along those roads.

“We are therefore asking the federal government to mobilise the contractors to come and work on these roads because Nigerians are going through hell along these roads,” he added.

On the recent protest against EFCC by alleged “Yahoo boys” in the state, Aniagwu urged the people to remain calm, adding that government had ordered investigation into the incident.

He assured that the government would continue to protect the rights of law-abiding individuals, but that it would not protect anyone found to have gone against the law.

“The state government will carry out a thorough investigation to ascertain whether the EFCC operated within the confines of the law and whether in doing so they realised that the need to respect the fundamental rights of those arrested.

“We will also examine whether those alleged to have gone on rampage to protest also respected the rights of the EFCC to carry out its duties as enabled by law,” Aniagwu said.

On his part, Ifeajika thanked journalists in the state for their support and urged them to do more critical analysis on issues as watchdogs of the society by making governments accountable to the people.

He said that Delta had been adjudged by the National Bureau of Statistics (NBS) as second least poverty state in the country, adding that Governor Ifeanyi Okowa was being accorded a national honour by the APC-led Federal Government in recognition of his outstanding accomplishments in the governance of the state.