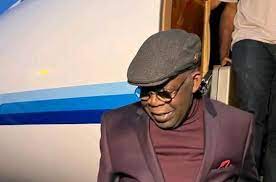 PERSPECTIVE – 2023: Of Tinubu and his disappearing acts

Undoubtedly, many Nigerians are angry, and unhappy over the return – alive, and looking refreshed – of Asiwaju Bola Ahmed Tinubu to Nigeria after a 12-day sojourn abroad.
Many had prayed, fasted and gone to the mountain, and hired clerics of both Christian and Muslim faiths and diviners of traditional worship, to intercede in and on their behalf, against Tinubu’s return to the country alive.
They’d concocted and spread falsehoods about his deteriorating health, such that he’s reportedly flown out of the country in an air ambulance on September 24.

That since arriving in London, his health had worsened, as he’s down with stroke, cerebral palsy, Alzheimer’s and Parkinson’s diseases, and became vegetative and couldn’t speak, move or recognise those around him. Quoting phantom reports by Reuters and The Guardian (UK), they claimed Tinubu’s doctors had vouched he wouldn’t be fit for the gruelling five-month campaigns that lead to the February-March 2023 general election.

With the doctors reportedly vowing to pin him down in London till after the polls, an alleged “incubated” Tinubu was prepared – or be forced – to announce his withdrawal from the February 25 presidential election.
Those who’d wished Tinubu dead actually “reported” his death allegedly covered up by the Muhammadu Buhari administration, the All Progressives Congress, and the Tinubu-Shettima campaign, to deceive Nigerians.

In consideration of these scenarios, pundits kickstarted a debate on how to replace Tinubu as the APC candidate, and who to replace him among the contestants in the June 6-8, 2022, primaries that picked him as standard bearer.
Different names were weighed among the defeated APC presidential aspirants, chiefly that of former Rivers State Governor and Minister of Transportation, Chibuike Rotimi Amaechi, who came second to Tinubu at the primaries.

But to clear the fog of doubts about the “real inheritor” of the APC presidential ticket absent Tinubu, the frenetic pundits consulted the amended Electoral Act 2022. Section 34(1) of the Act states that only a running mate can replace a presidential candidate in the event of withdrawal or death. Thus, in Tinubu’s case, his running mate, former Borno State Governor Kashim Shettima!

Alarmed by the wish for his death and replacement as the APC standard bearer, Tinubu went to work, and posted videos of his workouts, and pictures of his meeting with aides and friends, and grandchildren at his London home.
But sceptical Nigerians dismissed the videos and pictures – released consecutively in a space of 36 hours – as old and photo shopped to confuse the public, APC’s members, and supporters of the Tinubu-Shettima ticket.

All Nigerians wanted was a live telecast, for Tinubu to address the nation, and answer questions about his health status, and why he’s overseas when campaigns for the presidential election had commenced on September 28!

Tinubu’s lately been disappearing like a magician. It’s become a case of today, he’s in Nigeria, and tomorrow, he’s rumoured to be or sited in the United Kingdom, France or Saudi Arabia, for medical treatment, consulting on 2023 polls or performing the Lesser Hajj, respectively. Infrequently, timelines for these trips were released by Tinubu’s aides or his campaign, but most often, they’re secretive, and open to conjecture by the public.

The expression – disappearing act – is a noun defined by dictionary.com as “A sudden disappearance as if by magic and presumably alludes to a magician’s performance.” Similarly, thefreedictionary.com defines the phrase as “A quick or sudden departure without warning, especially so as to avoid something,” or “to go away or be impossible to find when people need or want you. That’s exactly what Tinubu’s become: Incommunicado, speculatively in his London home, or wherever, with his aides in the dark as to the whereabouts of the ‘Jagaban’.

Asked on October 5 about Tinubu’s location, the mouthpiece of the APC Presidential Campaign Council, Festus Keyamo, shocked Nigerians: He didn’t know. “Our candidate is not in the country currently, and I don’t have any information on where he is,” Keyamo told his interviewer on Channels Television’s Politics Today.

Keyamo, Minister of State for Labour and Employment, didn’t also know when Tinubu would return to the country, even as he’s sure “he will be back in a couple of days.”  Keyamo, a Lawyer and Senior Advocate of Nigeria (SAN), debunked speculations that Tinubu’s bedridden in a London hospital, inducing shifts of inauguration of the APC campaign council, and launch of the party campaigns.
“He (Tinubu) is also not on a medical trip; I don’t have such information,” Keyamo admitted once again, adding, “It is not true that we have not started campaigns because the candidate is sick and is not around.”

Keyamo also said that the videos posted of Tinubu’s workouts weren’t to prove a point, as they’re done “in real-time and posted on his (Tinubu) Twitter handle.
“It is not to prove that he is alive; we are not trying to prove anything to anybody,” he said, adding, “Our candidate is not struggling to prove himself to anybody. People, who are close to him, know that he is an avid cyclist; he does that all the time, and it is his regular routine.”

Though his ignorance of Tinubu’s location isn’t expected of a campaign’s spokesperson, yet Keyamo, a rights activist, resembles a truth-teller in the midst of the secrets that surrounded the APC candidate’s whereabouts.
Tinubu “disappearing acts” invoked memories of the extent and nature of the ailment(s) that regularly kept President Umaru Yar’Adua out of the country, even when canvassing for election in 2007, until he died in 2010. There’s also the extent and disease(s) that manifested in President Buhari before he’s elected in 2015, and which continued to plague him until the early part of 2022.

So, Tinubu’s frequent eloping from the country on health ground has dominated political discourse, as the 2023 general election goes into the homestretch – barely four months to the presidential contest in February. Tinubu’s medical condition predates the APC primaries, in which the former Lagos State governor dusted a field of heavyweights for the ticket. He’d previously travelled for a knee surgery in London. Hence, his unknown ailment has prompted theories about the North propping him up in the calculation that he won’t last the distance of the 2023 polls or the presidency. In that regard, the slot would revert to Northern Nigeria – which produces President Buhari, whose eight-year tenure runs out in May 2023 – rather than to Southern Nigeria on a rotational basis every eight years.

Well, Tinubu is back, and has proclaimed he’s set for the arduous campaigns that culminate in the February and March 2023 national and state elections, accordingly. But is he out of the woods? That’s yet to be seen!
Meanwhile, both sides of the political divide – those for and against Tinubu’s presidency – are expectant: That their prayers to keep him alive and in or out of the crucial 2023 elections, and the presidency there from will be answered!