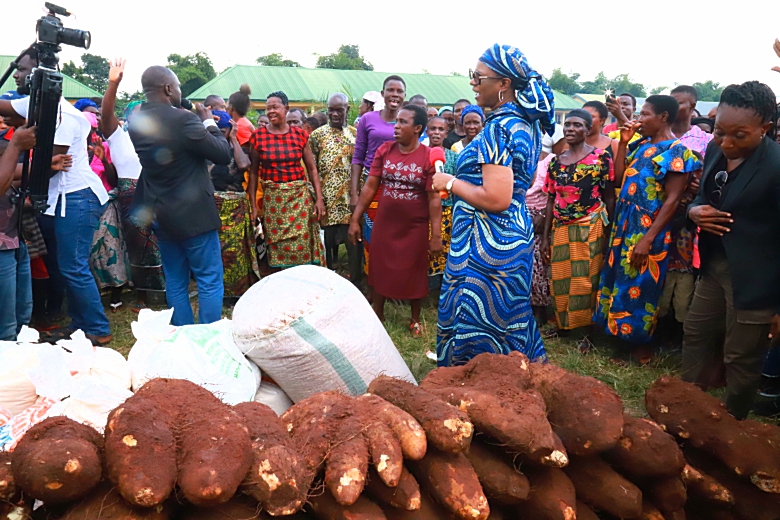 Addressing the IDPs at the camps while donating relief materials to them, she urged them not to see their current situation as end of life, saying that God was in charge of their cases.

She admonished them to see their presence in the camp as an opportunity to strengthen their divine relationship with God, adding that they should always give thanks to God in any situation they found themselves.

The governor’s wife also advised the IDPs to love one another, and obey the rules and regulations in the camp.

Praying, she said “as you come here (camp) healthy, you will leave healthy and there will be no loss at the end of your stay in the camp”.

“We should give thanks to God for the gift of life. We should always appreciate God in whatever situation we find ourselves by worshipping Him,” she added.

To the youth among the IDPs, Okowa said “your coming to the IDP camp is not a period of immorality. You should zip up so as not to put your future in jeopardy”.

At Utagba-Ogbe Grammar School, Kwale, a 63-year-old woman, Mrs. Maria Mohammed, expressed appreciation to Dame Okowa for restoring her sight through the free eye care programme sponsored by her NGO, the 05 initiative.

At the camp at Isoko Central School, Oleh, a Peoples Democratic Party (PDP) candidate for Isoko Federal Constituency, Mr Jonathan Ukhodiko, lauded the governor’s wife for her philanthropy towards the less-privileged in the society.

Ukhodiko urged public spirited individuals and philanthropic organisations in the country to emulate Dame Okowa by reaching out to those in need.

Some of the IDPs who spoke in separate interviews with journalists, expressed appreciation to the governor’s wife for donating the relief materials to them.

While saying that the items distributed to them would immensely go a long way in ameliorating their plights, they prayed God to grant her and her family sound health and long live.