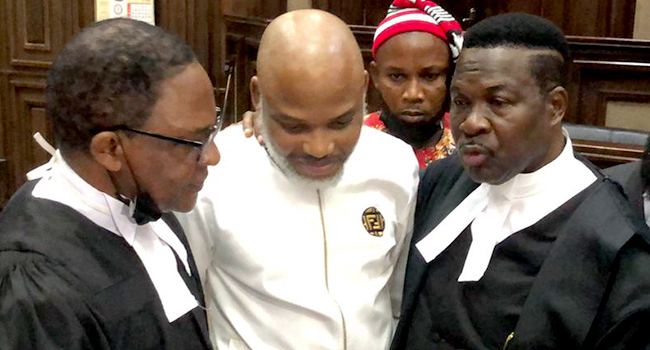 The Court of Appeal judgement, discharging Nnamdi Kanu, Leader of the Indigenous People of Biafra (IPOB), is an opportunity for the Federal Government to save its face rather than pursuing trivialities, Mike Ozekhome (SAN), advised on Thursday night, hours after the government gave an indication that it might not be setting the IPOB boss free just yet.

A three-man panel of the appellate court in a unanimous judgement read by Jummai Sankey also struck out all remaining seven counts against, which an Abuja Federal High Court refused to dismiss, for “lacks the jurisdiction to entertain the suit.”

Thursday’s judgement, was on the forceful extradition of the IPOB leader from Kenya in June 2021 to Nigeria, which the court agreed amounted to extraordinary rendition to Nigeria in flagrant violation of the OAU convention and protocol on extradition.

The court held that the 15 counts preferred against Kanu did not disclose the place, date, time and nature of the alleged offences before being unlawfully extradited to Nigeria in clear violation of international treaties and that the Federal Government failed to disclose where Nnamdi Kanu was arrested despite the grave allegations against him.

Noting that the act of abduction and extraordinary rendition of Kanu from Kenya without due process is a violation of his right, the court added that the manner in which he was procured and brought before the court was not evaluated by the lower court, before assuming jurisdiction to try him.

The lower court having failed to address the preliminary objection challenging its jurisdiction particularly the issue of abduction and extraordinary rendition from Kenya to Nigeria, the lower court failed to take cognizance of the fact that a warrant of arrest can only be executed anywhere within Nigeria, the appeal court judgement said.

The African Charter on Human and People’s rights are part of the laws of Nigeria and courts must abide by the laws without pandering to the aim of the Executive, the appeal court said.

But, Abubakar Malami, conveying the Federal Government’s reaction, a statement in a statement by his spokesman, Umar Jibril Gwandu, said the appeal court only discharged Kanu and did not acquit him, adding: “The Office of the Attorney General of the Federation and Minister of Justice has received the news of the decision of the Court of Appeal concerning the trial of Nnamdi Kanu. For the avoidance of doubt and by the verdict of the Court, Kanu was only discharged and not acquitted.

“Consequently, the appropriate legal options before the authorities will be exploited and communicated accordingly to the public. The decision handed down by the court of appeal was on a single issues that borders on rendition.

“Let it be made clear to the general public that other issues that predates rendition on the basis of which Kanu jumped bail remain valid issues for judicial determination. The Federal Government will consider all available options open to us on the judgment on rendition while pursuing determination of pre-rendition issues.”

However, Ozekhome, while countering the FG’s position, while appearing as a guest of News at 10 on Channels Television, argued that the verdict of the appellate court, offered Kanu’s traducers an escape route to save face on the matter, going by the history of the case, adding that from the pronouncement, and its reasoning in arriving at it, there was nothing to waste further time on.

He said: “What it (the ruling) means is that Nnamdi Kanu was discharged today,” Ozekhome said. “That means he is a free man. And he should be allowed to go home tomorrow by the time we get a certified true copy of the judgment, we serve it to the Office of the Attorney-General and the DSS to allow Nnamdi Kanu go. Let my people go.”

“If the Federal Government wants to pursue trifles against a citizen by appealing against such a well-rendered judgement, I can only wish them good luck. But let me also tell the Federal Government that if they appeal, I’m going to file a cross appeal against two issues, which I do not agree with the Court of Appeal – that is the place of the commission of an offence, section 45 of the Federal High Court Act and the decisions of the Supreme Court, which makes it clear that you can only try a person in the place where you disclose the venue of the commission of the crime, the time, and the circumstances.

“When you say Nnamdi (Kanu) made a broadcast, from where did he make the broadcast? Is it in the spirit world? Is it in the lives of the dead? The Court of Appeal, with due respect, appeared to have glossed over that by saying it didn’t matter since the charge did not deceive him. That is not the issue. It is the venue where a crime was committed that you try the person. Nnamdi Kanu, you say made a broadcast, you’ve not told us where he made the broadcast.

“The other one which the Court of Appeal also agreed with us, where they said he brought in a transmitter at Ubuluisiuzor in Ihiala local government of Anambra State, which is outside the jurisdiction of the Federal High Court, Abuja, they also agreed with us. But all in all, the issue was jurisdictional. That is that under the extradition act, particularly section 15 and under international convention – OAU, United Nations, you cannot extra-judiciarily render a person by brute force, by force of arms from one country to the other.

“There must be a warrant of arrest, which must be accompanied by a written document to the host country that we want this person back. They did not do that. They just forced him back. And the doctrine of specialty is that even when you bring back, you can only try him for the offence you brought him back for. But they still subjected Nnamdi Kanu to the first five-count charge, which they later amended to seven-count charge and later amended again to 15 counts.

“Let me tell you, the Federal Government has amended the counts against Nnamdi Kanu seven whole times. At the Federal High Court, I was able to get eight of the 15 counts dismissed. It was the remaining seven that the lower court held on to that were today dismissed by the Court of Appeal. The remaining seven counts were set aside and Nnamdi Kanu was set free. Discharged by the court of Appeal and the Supreme Court has said that such a discharge amounts to discharge and acquittal.

“Continuing with appeal against a mere citizen when I see the Federal Government should see this as a good reception, as a matter that will be good for the whole country, to bring about normalcy, peace to the South East, peace to Nigeria, and they still want to appeal, then my take on it is that it will amount to persecution and no longer prosecution.”