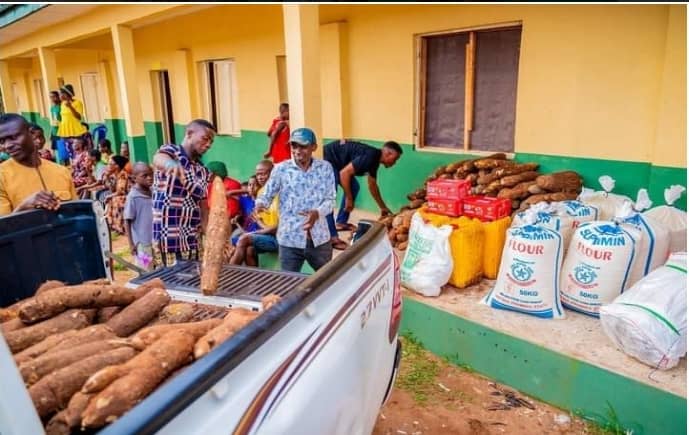 As part of spirited efforts by government, corporate bodies and individuals to support victims sacked by the present flooding across the country, wife of Delta Governor, Dame Edith Okowa has visited the internally displaced persons camps at Ogbe-Afor and Onneh Primary Schools in Oshimili South local government area.

Dame Okowa in company of her O5 Initiative Team on Friday, October 14, 2022, presented food items and other relief materials to the displaced persons in the camps.

She urged the families whose houses, businesses and farms have been destroyed by the ravaging flood, to see reasons to thank God for the gift of life, stressing that all hope were not lost, as government would leave no stone unturned in ensuring that they were adequately catered for.

Dame Okowa said in times of afflictions and trouble, God was closer to his people more than they could imagine as he was concerned about their wellbeing.

While calling on well meaning individuals and cooperate bodies to send relief materials to IDP camps in the state, the governor’s wife advised parents in the camp to live in harmony with one another and prayed God to comfort them.

She charged youth and teenagers to shun all forms of immoralities and be law abiding in the camp.

Dame Okowa disclosed that government would visit all the IDP camps in the state with adequate provisions.