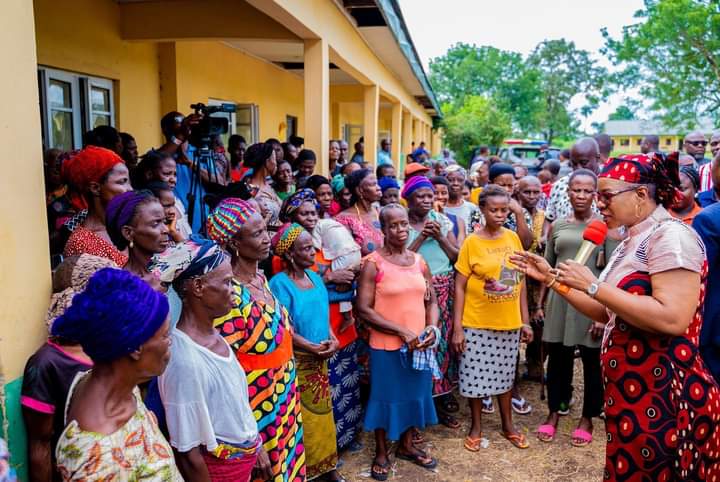 Following the devastating effects of this year’s flood, the Delta state Government through various agencies have continued to reach out to victims sheltered at designated Internally Displaced Persons (IDPs) camps across the state.

Wife of the state governor and Founder, 05 Initiative Dame Edith Okowa in continuation of her visitation exercise to affected families and communities, has presented various food items and relief materials to IDPs at Aboh, Burutu, Ewulu, Patani camps.

Speaking on Tuesday, with the flood victims who have also lost their businesses, at the Ewulu Mixed Grammar School Camp in Aniocha South local government area, Dame Okowa encouraged them with messages of hope and love.

She admonished the over one thousand, four hundred flood victims including children who were in the camp at the time of the visit, to make the best out of the situation, stressing that whatever God allowed to happen was for a purpose and it will turn around for their good.

The governor’s wife said the passion to care for the needy was the core mandate of the 05 Initiative, necessitating her visit to the various IDPs in the state with food and relief materials and urged them not to be dispaired by their present condition but be positive in their thoughts and actions. 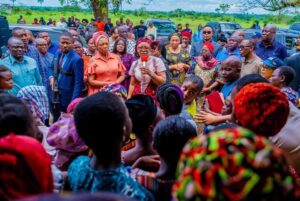 Dame Okowa expressed the hope that the flood would recede in no distant time, to enable the flood victims return to their homes and start normal life again.

While encouraging the IDPs to remain calm as the state government was doing everything possible to ensure their well being, during and after the flood, the governor’s wife charged them to renew their relationship with God who alone could bring lasting solution to their predicament

Items donated by Dame Okowa and O5 Initiative to the four camps include, bags of rice, garri, beans, tubers of yam, palm oil plates, diapers and bags of soap.