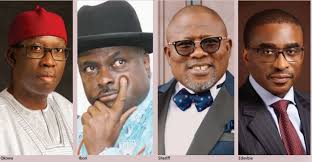 United Kingdom-based Lawyer, Mr. John Ewhubare Siakpere,(JP), LLM, has hailed the Supreme Court, on Friday’s landmark judgment in which the Speaker of Delta State House of Assembly, Rt. Hon. Sheriff F.O. Oborevwori, was confirmed as the gubernatorial candidate of the Peoples Democratic Party (PDP) in the state.

Mr. Siakpere, who is also the Convener and National Coordinator of the Siakpere Team for Support for Sheriff Oborevwori, a political pressure group, rooting for the election of the Speaker of the Delta State House of Assembly in the March 2023 governorship elections, praised the Supreme Court for dismissing the appeal brought before it by the main opponent in the PDP gubernatorial primary election, Chief David Edevbie.

He said the judgment of the Supreme Court demonstrated and confirmed the widespread pronouncement that the judiciary is the last hope of the common man.

He congratulated the State PDP Governorship Candidate on the final judgment in the litany of litigations over his election, qualification and eligibility as the PDP flag bearer in the forthcoming gubernatorial elections in the state.

With Friday’s Supreme Court judgement, Mr. Siakpere said all was now set for the victory of Rt. Hon. Oborevwori in the March gubernatorial polls.

He urged all Deltans, especially the Urhobos to queue behind and support the election of Oborevwori, saying that the PDP Gubernatorial Candidate would deliver on his promises and develop Delta State in all facets.

Also, Mr. Siakpere extended the Olive branch to the Leader of the PDP and former Governor of the state, Chief James Ibori and Edevbie with a call on them to forget the issues surrounding the governorship ticket of the party.

He advised them to put the issue behind them and throw their weight behind Rt Hon Oborevwori in the interest of the party and Urhobo nation.

“Our kinsman and brother, Chief David Edevbie, has fought a good fight and the Supreme Court has laid the matter to a final rest. I can only appeal to him to put the recent events in the PDP behind him and join hands with his brother, Rt. Hon. Sheriff F.O. Oborevwori, to ensure that PDP wins the governorship election. This must be done in the interest of the party and our interest as Urhobos in the PDP and the state as a whole.

“I am also seizing this opportunity to plead with our leader and former Governor, Chief James Ibori, to rally all PDP members in Delta State around himself to ensure victory for PDP in all elections in the state. As the father of all, he should forgive and embrace all members as his children. This is my appeal to him and I am convinced that he would see reason with me to take up the challenges of leadership at this auspicious time,” Mr. Siakpere, added.