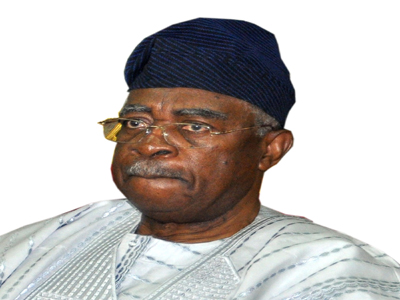 Terrorist attacks: Danjuma again knocks military, says bandits trying to recolonise us, take our land; we must fight back, drive them away, he urges Nigerians

Lt. Gen. Theophilus Yakubu Danjuma has called on Nigerians to fight back, drive away terrorists that want to ruin the country and recolonised the people with their criminal acts.

The former Chief of Army Staff, who spoke in Taraba State said Nigeria was being brought to ruin by heavily armed “useless” criminals who are terrorising the country and taking over their lands.

The former defence minister, who insisted on self-defence to drive out the country’s common “enemy”, said Nigeria would be finished if this is not done.

The octogenarian spoke on Saturday when he delivered a goodwill message in Wukari, Taraba State, where Governor Darius Ishaku presented staff of office to His Majesty Manu Ishaku Adda Ali, the 25th Aku Uka.

He knocked the military for living in denial over Nigeria’s aggravating security challenges, saying the “evidence” of what he said four years ago is now obvious for all eyes to see.

Danjuma had in March 2018 urged Nigerians to defend themselves against their killers but his call for self-defence attracted stark criticisms.

Four years later, the former defence chief on Saturday said, “Our country is under siege by armed bandits, all over the country when some few years ago, I warned that the Armed Forces are either not capable or unwilling to protect us and that we must defend ourselves.

“The first denial of what I said came from the Ministry of Defence. They said I was lying and they set up a kangaroo Board of Inquiry to investigate the truth or otherwise of what I said and they invited me to come and testify, I did not go.

“They wrote their report which said that I was only speculating, that there was no evidence. And now there is evidence; the whole country now is being run and overrun.”

‘Bandits Trying To Recolonise Us, Take Our Land, We must fight back

Danjuma, who said armed bandits are trying to recolonise Nigerians and take over autochthonous lands, noted that the people must fight to resist the invaders and drive them back to where they came from.

He further urged the new traditional ruler to reunite his subjects for the defence of his kingdom against marauders, saying the best form of defence is attack.

“Right now, we are all sitting ducks, these people are armed to the teeth with all weapons of mass destruction and we don’t have them but we have the numbers and the land belongs to us. They are trying to recolonise us and take over or land. Can I allow you to defend yourselves?” he asked the crowd who chanted a loud ‘Yes’.

Continuing, the ex-COAS said, “They said I told them to defend themselves, I didn’t give them arms. I will not give you arms, find out how these people got it. Use the same means to defend yourselves.

“This beautiful land called Nigeria, the biggest country for black men in the whole world is being brought to ruin by absolutely useless criminals. But how did they get here? Of course, some of them are foreigners and there are collaborators.

“So, my prayer is that God Almighty that has given us this land will give us the courage to face our enemy and locate where he is and drive him out of the country. This we must do otherwise Nigeria is finished.”

With unending attacks by bandits and terrorists all over the country, some governors have also called for self-defence. They include Bello Matawalle (Zamfara), Aminu Masari (Katsina) and Samuel Ortom (Benue), even Governor Rotimi Akeredolu ( SAN) of Ondo State is demanding from the Federal Government authority to arm the Amotekun Corps to enable it be effective in the defense of the state and its people against the well armed terrorists and bandits ravaging the state.