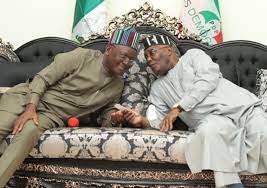 The leaders noted that recent comment by the Alhaji Abubakar during the presidential interactive sessions organized by Arewa Joint Committee held at Arewa House in Kaduna was not a good signal but source of worry for all Benue people.

The PDP candidate during the session was quoted among others as saying, “I am angry with Samuel Ortom for profiling Fulanis as bandits and terrorists because I am a Fulani.”

Addressing the media Tuesday in Makurdi, the MINDA elders through their Chairman, Samuel Utoo and Secretary Charles Torbunde said they took “exception to the public exhortation and profiling of Governor Ortom who has been globally recognized as a model in the fight against the annihilation of Nigerians by marauding pastoralists Fulanis not only in Benue State but across Nigeria.

“Why did Alhaji Atiku fail his emotional balance by contextually dovetailing a general situation, which had more public appeal, into subjective personalism with Governor Ortom as a target? The MINDA Leaders of Thought find such baseless outburst and accusation unfounded, reprehensible and condemnable especially coming from a political figure laying claim to Pan Nigerianism, in a nation with trappings of ethnic fragility.

“Alhaji Atiku’s outburst is comprehensively a product of bad taste and unfounded malice that is drenched in ethnic chauvinism against an ethnic group that looks up to him as a protective shield, having been accorded the rear privilege of an honorific Chieftaincy title of “Zege Mule u Tiv”, the Paramount Shade of the Tiv people.

“The MINDA Leaders of Thought hereby totally condemn this open attack on the person of Governor Ortom, whose people oriented position on Open Grazing and Ranches Establishment Law Is celebrated even in developed climes as the most acceptable method of animal husbandry, as opposed to the current trend which is archaic, outdated and anachronistic in the 21st Century. This is a fact Alhaji Atiku himself accepted as a norm.

“In case Alhaji Atiku is oblivious or has simply feigned ignorance about the viciousness of the marauding Fulani against the people of Benue State, he should be reminded that on many occasions, the Fulani sociocultural organization, Miyetti Allah Kauta Hore and their allies have brazenly owned up to the killings in Benue State.

“As this dirge is being written today, bodies are being buried in Ukum Local Government Area of the State where bandits and terrorists which had the trappings of Fulanis, have murdered in cold blood more than 36 people in Gbeji. And more bodies are still being recovered.

“The past seven years plus have seen Benue traumatized, witnessing unprecedented killings in the hands of marauding Fulani-induced banditry and terrorism, during the APC led government at the centre; leading to about two million people displaced and cramped in IDP Camps without any intervention from the Federal Government.

“However, in our thinking, we saw 2023 offering hope and reprieve because the ruling party is on the cliff of leaving the stage for the PDP. As a State that suffer more Fulani attacks, we are leaving no stone unturned to ensure Benue’s votes go only to the PDP.

“Unexpectedly, however, there has been an obvious disappointment and antagonism harboured against the symbol of Benue State, Governor Ortom who is our torch bearer to national politics including the 2023 general election.

“What therefore is Benue’s hope if eventually the PDP clinches power at the centre with the Presidential candidate of the PDP harbouring such deep seated animosity against our Governor Samuel Ortom, our leader?”
• Source: https://www.vanguardngr.com/2022/10/herdsmen-attacks-benue-elders-express-fears-over-states-fate-under-atikus-presidency/