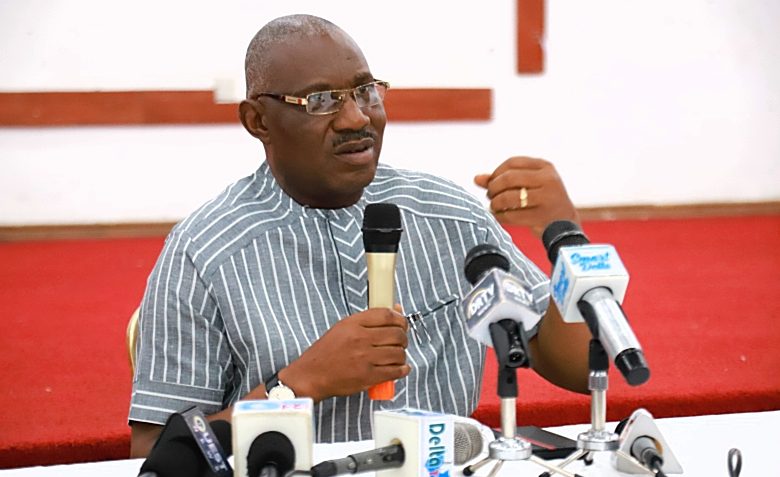 The Chief Press Secretary (CPS) to Governor Ifeanyi Okowa of Delta, Mr Olisa Ifeajika, has called on Deltans to rally round the Peoples Democratic Party (PDP) gubernatorial candidate in the 2023 general elections in the state, Rt. Hon. Sheriff Oborevwori, saying his integrity precedes him.

Ifeajika made the call in an interview with journalists at Government House, Asaba, and said that Oborevwori had the necessary democratic credentials needed to consolidate the developmental strides of the Senator Ifeanyi Okowa-led administration in the state.

According to him, the Speaker has the goodwill and charisma as well as the intellect to further enhance the socio-economic growth and development of the state.

The CPS, who was reacting to statement credited to the Deputy President of the Senate, Senator Ovie Omo-Agege, deflated Omo-Agege’s remark of incompetence on Oborevwori, and urged Deltans to discountenance the ill-conceived statement on the Speaker of the State’s legislature.

“For the first time in the country, not just Delta, we have found a Speaker that has led a legislature for five years without rancour.
“Every day, we hear of impeachment here and there; we hear of fights in legislative houses in other states, but we have not recorded such since Oborevwori became Speaker.

“So, he is one man that has run that State House of Assembly with a lot of transparency and prudence and that has given him integrity.

“It is not surprising that even the APC members of the House are rooting for the man (Oborevwori). All the members have come out enmasse in support of his ambition.

“Thank God that he is the flag-bearer of PDP in Delta. It is not by magic. Omo-Agege is a flag-bearer for his own political party in Delta.

“Omo-Agege should at all times, therefore, tell Deltans what he will do for them. He should desist from casting aspersions on his opponent, not even Governor Okowa, who is not on the ballot with him,” he said.

Ifeajika remarked that it was quite shameful that with Senator Omo-Agege’s status, he did not know the level of development in Delta, the state he aspires to govern, saying that his lack of knowledge was indication that he was far from the State.

He said that his distance from the State which had made him unappreciative of the audacious transformation of the landscape in the state was often apparent in the statements of his aides, who share his views on all matters, always talking from his perspective.

He noted that Oborevwori “is a man loved by everybody in the state’’, stressing that the people’s love for him was demonstrated when he won the PDP primary openly, revealing his acceptance by everybody.

“Omo-Agege should begin to think of how he will go to the polls and defeat the man and not to talk about the Speaker not being suitable. The man is fit and firm and that is why the PDP is proud to have him as its flag-bearer.

“As uncharitable as the word ‘tout’ used by Omo-Agege on Oborevwori is, everyone knows that he couldn’t have been the Speaker of the House of Assembly and Deputy National Chairman of the Conference of Speakers in this country if that uncouth language was right about him. So, to call Oborevwori a tout, your guess is as good as mine about who the real tout is.

“You know and remember what happened at the Senate sometime ago, when the Mace of the Senate was taken away in a Gestapo manner. So, we know who the touts are.

“It is a good thing that Omo-Agege is talking about touting because we know the real touts. If Oborevwori was that type of street person, it would have shown in his leadership of the House of Assembly.
On the just-decided litigation between Oborevwori and Edevwie, the governor’s spokesman said “there is no issue on that. I have told people that Edevwie is a civilised man. When he felt that something was wrong with the processes around Oborevwori’s aspiration, he challenged it in court.

“He didn’t pick up arms or thugs to go and fight. He went about it in a very civilized way – the court; and, the court has finally adjudicated on the matter and he has congratulated Oborevwori. So, we (PDP) are one family.”