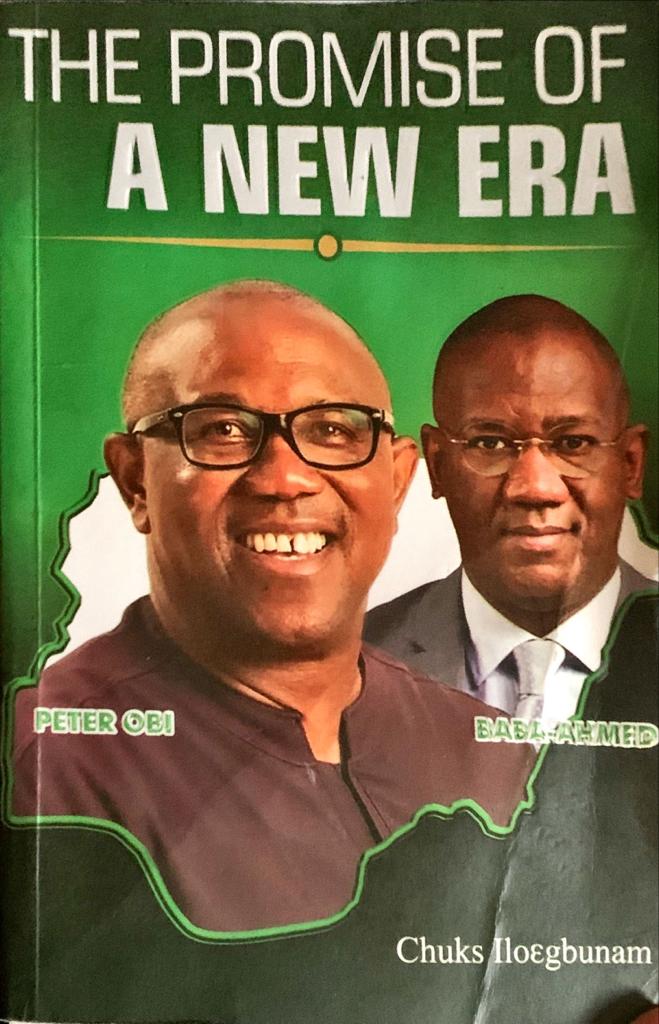 We continue in The Public Sphere to examine books as a lens to the discourse on various issues. Books are a ready and valuable resource for me as a bibliophile. I like what they promise and sometimes deliver.

Books play a significant role in politics, policy, and governance. The forebears of the Nigerian political class diligently penned their thoughts in various books. The most notable were Dr Nnamdi Azikiwe and Chief Obafemi Awolowo. They had books on various issues, from their biographies to ideology and policies.

Books are a tool of political communication, as I noted in the forthcoming Media Relations Playbook. Politics in the 21st century plays out in the various arms and manifestations of the media. The role of the media and its influence as an interface between the electorate and politicians has grown. A wide range of media are now available, from broadcast to print through social media and books, in this case.

The Promise of a New Era is an outstanding treatise in pamphleteering and political communication that makes the case for the duo of Mr Peter Obi and Dr Yusuf Datti Baba-Ahmed for Nigerian presidency in 2023. The author released it in September 2022 ahead of the release of the beginning of political campaign season by the Independent National Electoral Commission.

Iloegbunam treads the paths of historical figures and tried and tested approaches in this 192-page book. The late Dr Onukaba Adinoyi-Ojo authored for an earlier era a biography of the presidential candidate of the PDP, Atiku Abubakar: Atiku: The Story of Atiku Abubakar.

In 2011, the Atiku campaign also published a booklet, Making Good Things Happen: The Atiku Abubakar Policy Document.There also books on Bola Ahmed Tinubu from previous campaigns. They include his self-authored Asiwaju Bola Ahmed Tinubu, The faith of a democrat Principles and Practice of Welfare Liberalism; Bola Ahmed Tinubu and Brian Browne, Financialism: Water from an empty well, and Bola Ahmed Tinubu, My Convictions, a book of speeches, plus Sam Omatseye, Many Little Miracles: People’s testimonies on Asiwaju Tinubu’s eight years as governor of Lagos State; Pamphleteering was one of the roots of political public relations.

Pamphleteers wrote and issued statements and booklets on controversial issues. They took a stand and communicated it. One of the earliest pamphleteers helped define the field of political PR. Quintus Tullius Cicero was the brother of Marcus Cicero. Marcus wanted to win the election to become the Roman Consul in 64 BC. Decision-makers were sceptical about Marcus, an outsider both geographically (he came from outside Rome) and within the system. Quintus then sent him a pamphlet on how to win the election.

Quintus identified many of what modern management now terms Key Success Factors. His Commentariolum Petitionis said Running for office includes securing the support of your friends and winning over the public.Know your enemies and those against you.Impress the voters at large.Take stock of the many advantages you possess.Cultivate relationships with influential people.Ensure the support of friends and family, as it was, securing your home base. Ensure that “those connected with you are all behind you and want you to succeed.”Secure supporters from a wide variety of backgrounds.Seek out men who will represent you as if they were running for office.Three things guarantee votes in an election: favours, hopes and personal attachment. Give these incentives to the right people. The most essential part of your campaign is to bring hope to people and a feeling of goodwill toward you.

Chuks Iloegbunam is a champion pugilist in the political communication space, journalist, author, and practical man of public affairs. He got into the political scene by happenstance because of his fight for justice in the first coming of Peter Obi as governor of Anambra State. He wrote consistently to argue the cause of Obi without even meeting the man at the time. They met later and when Obi became the governor, he appointed Iloegbunam Chief of Staff.

The Promise of A New Era reprises that trajectory. Iloegbunam has argued the cause of Obi-Datti as a foremost Obedient. Unlike majority of the Obidients, Mr Iloegbunam has a long history of association with and personal involvement with the principal character Mr Peter Obi. He thus shares first-person accounts and rich background in this book.

The eight chapters of The Promise takes the reader through the Peter Obi-for-President journey and why the author thinks he is the man Nigeria needs now and for the near future. The book contains an Acknowledgement, Foreword by Valentine Ozigbo who was PDP gubernatorial candidate in 2021, Introductions, and eight chapters. One of those chapters are excerpts of “Intellectual Interventions” by other writers. Those cited extensively here Festus Adedayo, Okey Ndibe, Farooq Kperogi and Obi Nwakanma.

The author declares in Chapter 8: “The broad political highway goes two-pronged into 2023; the one road leads to perdition, the other to regeneration. Which of the roads would the heedless take?”Mr Iloegbunam does an exciting job of presenting the case for Obi-Datti.

Most of the book shares his knowledge and experience of Obi. A chapter (Two of a Kind, chapter 5) introduces the reader to vice-presidential candidate Dr Yusuf Datti Baba-Ahmed. It is very crucial that he did so because I have argued that we should pay as much attention to the running mates as we do to their principals as the VP candidates are only a heartbeat away from occupying the prime spot.

Iloegbunam expressed strong opinions either way. The book contains very flattering opinions backed with evidence about Peter Obi and Yusus Datti Baba-Ahmed and an unflattering portrayal of their opponents.

Every Obidient should have a copy of The Promise of A New Era to ground themselves in the arguments and case for their candidate. Copies are rare though as readers seem to grab it off the press quickly as witnessed in book presentations in Lagos and Abuja.

The Promise of A New Era could benefit from the tested formula of the Obidients in replication or faster reproduction while observing copyright laws. Worth reading!