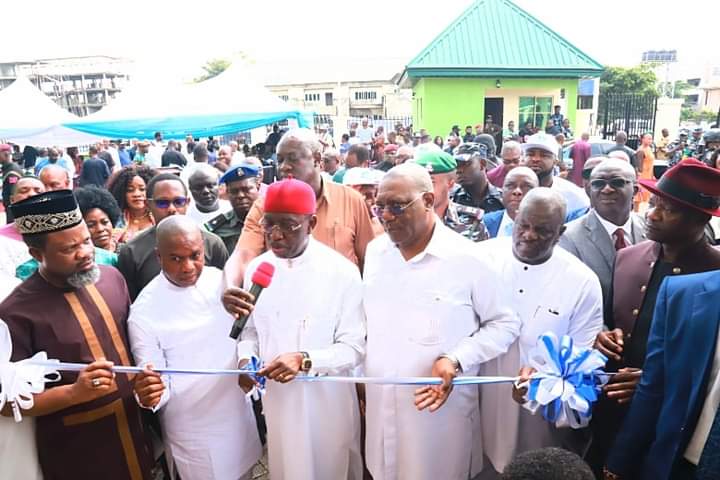 Delta Governor and Vice-Presidential candidate of the Peoples Democratic Party (PDP), Sen. Dr Ifeanyi Okowa has called on governments at all levels and other agencies to protect the freedom of the Press to enable it play its role of contributing to strengthening democracy and good governance in the country.

Okowa made the call at the inauguration of the Secretariat of Delta State Council of Nigerian Union of Journalists (NUJ) in Asaba on Friday.

According to him, the independence of the Press is very important in a growing society and it is something that we must practice. I also urge the Press that in the face of all pressures, they must try as much as possible to inform, and inform accurately and appropriately.

He said: “The media must ensure that the information that gets out there to our people is the right information and that information is justiceable at every point in time.

The governor commended the media for adequate reporting of government activities and for appropriately informing the public on the activities.

He expressed appreciation to the NUJ in the state for the cordial relationship between it and the state government, saying “we have had a reasonable level of cooperation and they know that we do not gag them; we work as friends.

“This building is seated on very prime land and I thank God for that because the Press deserves that. The more you inform the people, the more educated the people are, and the more functional our democracy.”

He said his administration had done well in transforming the state in spite of criticisms from the opposition.

According to him, there is no doubt that we have done a lot in the last seven years, except for those who still want to doubt even while they can see. These are people who do not want to speak the truth because of politics.

“Recently, I heard one of our top politicians in the state who ought to know, say that we have done nothing in Asaba, the state capital and I began to wonder why people who are highly placed, speak in that manner and try to deceive the people.

“It’s very insulting to the people and not to me, because they know what Asaba was before. We know what has been done to ensure that we are able to control the storm water that we had in this state.

“You may not see all the drains because it’s not on the surface. But, we know how many billions of naira it cost us to ensure that people have livable homes.

“The State Secretariat that we see today did not cost one billion naira. When I was building that, the same party had its people criticise it. But today, I think the civil servants know that it’s a place conducive for them to work.

“We know how the road network was and we know how it is today. There is a university in this place today – the former Anwai Campus of Delta State University now turned into a full university.

“If you go in there, you will see lots of development. And by God’s grace, by the time we leave in May, the Deputy Governor and I will be proud that we were here in government for eight years,” Okowa stated.

He said that a free press, independent, vibrant, objective and nationalistic was critical pre-condition for good governance in a democracy.

“In most countries of Africa, especially in Nigeria, in the past years, the greatest advertisement for the democratic dispensation is the free climate of dialogue and debate (free expression) that has been initiated and sustained by the media.

“The existence of an unfettered and independent press is necessary for democracy to flourish. The right to freedom of expression, thought and association will strengthen and encourage accountability of governments to all citizens,”
Isiguzo said.

He said government officials were expected to be honest, responsible, transparent, accountable and efficient in administration and service delivery.

“Where any of these is lacking or is deliberately subverted, it is the responsibility of the media to raise alarm,” Isiguzo stated.

In his welcome address, Chairman of the State Council of the union, Comrade Michael Ikeogwu, commended Governor Okowa for breaking the 31-year jinx by completing and inaugurating the press centre since the state was created.

“You have given us a name and identity; you have taken us out of Egypt to our promised land. You have put an unquenchable smile on the faces of members and defeated the imagination of naysayers praying that we continue to wander as nomads.
“That you completed the building project would have given us enough reason to celebrate, but going ahead to tastefully furnish the centre is another monumental achievement that must be counted for your administration,” he stated.