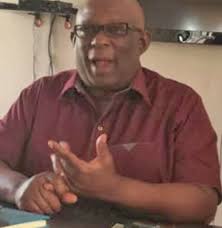 We watched the Delta APC governorship candidate,Senator Ovie Omo -Agege making a huge joke at Asaba with the inauguration of his campaign council witnessed by a scanty crowd. Typical of a man fixated with rabble -rousing, Omo Agege as usual degenerated low to cast baseless aspersions on the administration of Governor Ifeanyi Okowa, spewing crude vulgarities, unbecoming of one occupying the office of deputy senate President.

In a disastrous attempt to sound politically correct, Omo -Agege took a meaningless swipe at the state PDP governorship candidate Rt.Hon Sheriff Oborevwori ,an accessible grassroots politician far ahead of him in rating and electoral value. The stark reality is that beyond Omo-Agege’s empty boast and grandstanding on 2023 gubernatorial polls, he would be deflated and defeated.

Okowa having performed excellently well as governor in Delta, would lead PDP to victory. Sheriff would surely defeat Omo- Agege overwhelmingly across the 25 local government areas of the state.Democracy is about numbers not fake noise. Come 2023, Omo -Agege as APC governorship candidate, can not win one council area, anywhere in the state. He neither has the popularity nor structure to win. He knows. The man is not on ground.

Even as a supposed leader of APC, he perpetuated self -interest,personal greed, tyranny and arrogance.The party under him is wobbling, heavily factionalized with its few members after his coronation as candidate, alienated and generally frustrated by his rigid leadership style-a-one-man show.

This explains why the few APC leaders existing in the state boycotted the inauguration of Omo-Agege ‘s campaign council. They all rejected him, because they know he is not a team player and sellable candidate.

Ovie Omo-Agege came into government under PDP and rose from PA to SSG. His tenure as SSG remains the very worst in the history of Delta State.

A deputy senate president known for puppetry labeled Sheriff a lackey and accused Okowa of borrowing to run the state.A stooge of the clueless and inept Buhari government. It amounts to deceit and hypocrisy for him to talk about borrowing when the failed APC government he worships shamelessly had plunged the Nation into the worst and unimaginable debts, in the history of Nigeria. Under his leadership of the Senate, the Federal Government has borrowed a whooping 42tr naira without a whimper from him.

A deputy senate president in office only for his family and his tiny cohorts. He rode on the shoulders of PDP leaders and founding fathers in the state, including Okowa to gain whatever political relevance and patronage he has today. How can a tribal bigot, serial betrayer and incompetent character point accusing fingers on another.

It is so laughable that a man without capacity to succeed in 2023, would brag about truncating the Vice Presidential bid of Okowa, an acknowledged charismatic leader,poised to win along with the wave-making PDP presidential flag bearer, Atiku Abubakar.

Omo-Agege would face his worst electoral experience in 2023. Deltans have since rejected his governorship bid for his uneventful sojourn at the senate, just as Nigerians regret the misadventure of the APC-led government, which brought insecurity, hunger, hopelessness and fear upon the land.

The victory of Rt. Hon.Sheriff Oborevwori as next governor and Dr.Ifeanyi Okowa as VP, stand predestined and unstoppable.

* Dr. Festus Okubor is a a leader and chieftain of Peoples Democratic Party.