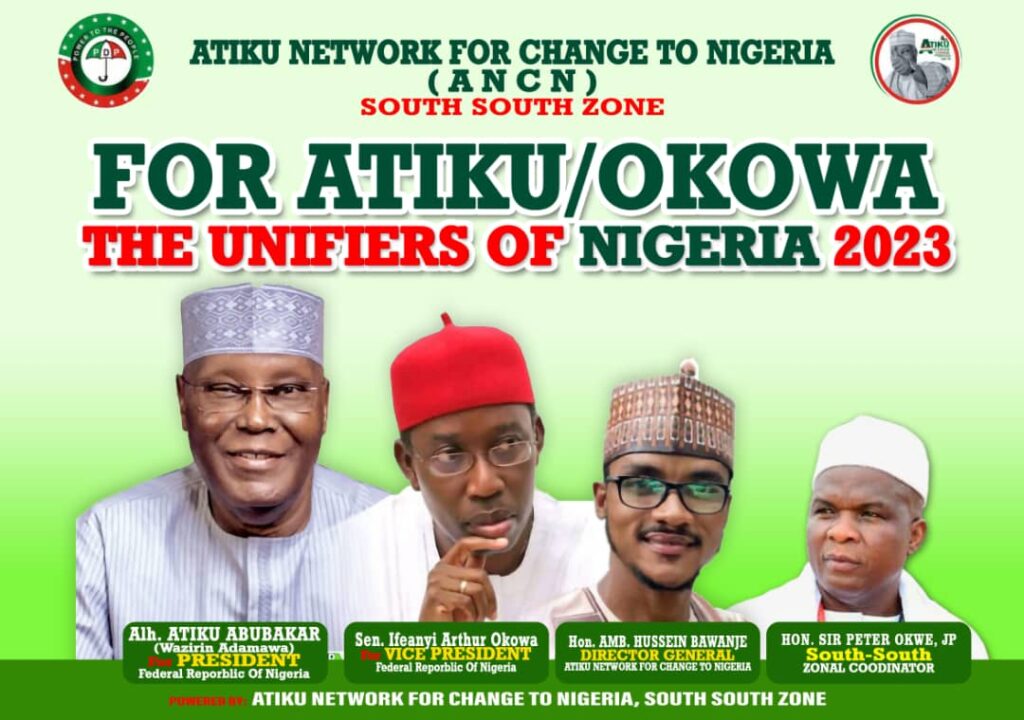 The Atiku Network for Change to Nigeria ( ANCN) has congratulated Rt. Hon. Sheriff Oborevwori on his victory and confirmation by the Supreme Court as the valid Peoples Democratic Party (PDP) Governorship Candidate in Delta State for the 2023 general elections.

The political support group with the catch phrase: “For Atiku/Okowa – The Unifiers of Nigeria” sent the congratulatory message in a press release signed by the South South Co-ordinator, Hon. (Sir) Peter Okwe.

Hon. Okwe said the Supreme Court’s judgment was well deserved as it validated the mind of the delegates who cast the majority votes scored by Oborevwori at the primaries. “The PDP delegates spoke through the ballots by casting the majority ballots to underscore their support for the emergence of Rt. Hon. Sheriff Oborevwori as the candidate that should fly the PDP Governorship flag at the 2023 elections.
“Now the people’s choice has been validated by the Supreme Court after a thorough adjudication of issues raised while the litigations lasted, ANCN is calling on all supporters, leaders, support groups and party faithful to ease tensions and fall behind PDP and the governorship candidate by closing ranks to face, defeat the opponents and return the party back to government in Delta.
” This is a patriotic duty that every PDP loyalist must display in support of the party and all its other candidates as well in all the 2023 elections,” Hon. Okwe said.

He thanked Olorogun David Edevbie for the maturity displayed in accepting the Supreme Court’s judgment and congratulating Rt. Hon. Oborevwori as the valid Delta PDP Governorship. “All other protagonists should follow the laudable example of Olorogun David Edevbie and join forces with the PDP leadership and go into the elections as a united body”, Hon. Okwe said.

He announced also that ANCN which has Hon. (Ambassador) Hussaein Bawanje as its Director General, believes in the Presidential Candidate of Peoples Democratic Party (PDP) Atiku Abubakar, (GCON), Wazirin Adamawa and his publicly declared rescue policy mission encapsulated in “My Covenant with Nigerians.”

· 1. Restore Nigeria’s unity through equity, social justice as well as co-operation and consensus amongst our heterogeneous peoples.

· 2. Establish a strong and effective democratic government that guarantees the safety and security of life and property.

· 3. Build a strong, resilient, and prosperous economy that creates jobs and wealth and lifts the poor out of poverty.

· 4. Promote a true federal system which will provide for a strong federal government to guarantee national unity while allowing the federating units to set their own priorities.

· 5. Improve and strengthen the education system to equip its recipients with the education and skills required to be competitive in the new global order which is driven by innovation, science, and technology and to lead healthy, productive, meaningful lives’.

“We are therefore, poised and fully prepared to mobilize the people of the South South geo-political zone to massively support and vote for the Atiku/Okowa PDP presidential ticket in the 2023 general elections. We see in the ticket a combination of experience, diligence to details, love for the unity of Nigeria, humility and a commitment to the emergence of a restructured federation of a unified people in a united country. Having Atiku Abubakar and Dr. Ifeanyi Okowa as president and vice president respectively in 2023 will restore the glory of the nation that the clueless All Progressive Congress-led Federal Government took the country away from through carelessness and lack of initiative.

“I call on all ANCN members and well meaning Nigerians in the South South to gird their loins and be prepared for the arduous work ahead to enable us birth a new Nigeria in 2023 where things work, where the youths are respected and have jobs; a Nigeria where people and property are secured, where power is devolved to the states and councils; a Nigeria of economic buoyancy and developed infrastructure, where Atiku is on the driving seat as president, assisted by the bright, lively and go-getting Senator (Dr.) Ifeanyi Arthur Okowa as vice president,” Hon. Okwe said.