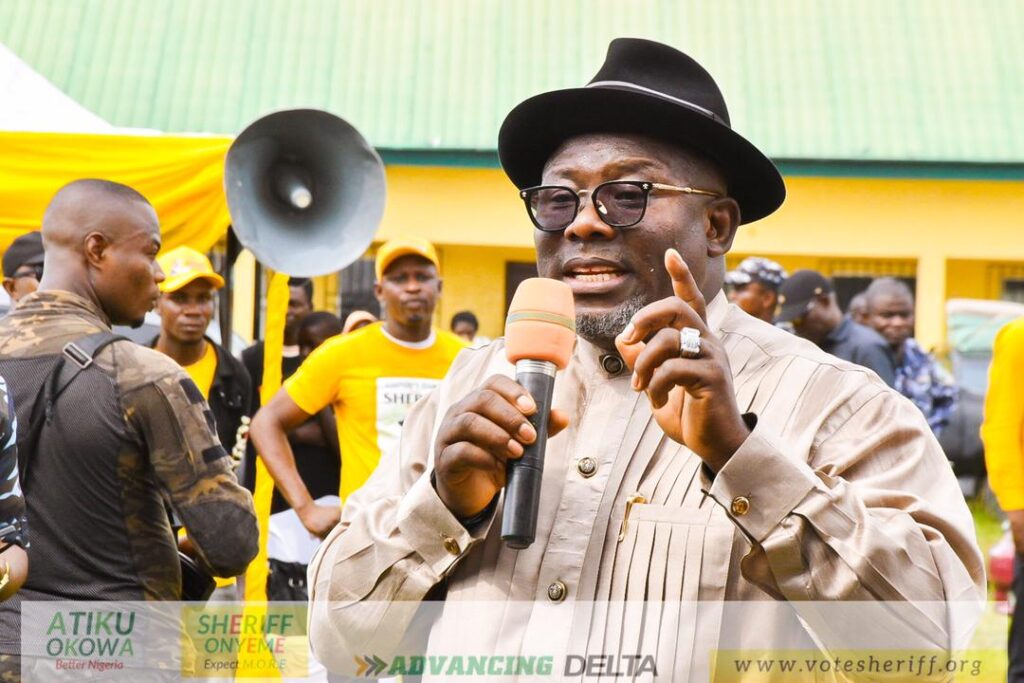 2023 Delta guber: No effort ‘ll be spared to deliver Oborevwori as governor, says Siakpere: APC impotent, has nothing to offer, says Oborevwori

The Founder and Director General of Team Siakpere for Sheriff Oborevwori 2023, Mr John Ewhubare Siakpere, at the weekend said that no effort would be spared until they deliver the Delta State PDP Governorship Candidate for 2023 general elections, Rt Hon Sheriff Oborevwori and he is proclaimed governor in March 2023, just as the PDP Governorship candidate gave heavy knocks to the APC for abysmal performance.

Siakpere spoke on Saturday at Egborode, Okpe Council Area of Delta state when members of Team Siakpere for Sheriff Oborevwori 2023 hosted Sheriff Oborevwori who is also the Speaker of the Delta State House of Assembly and National Deputy Chairman of the Conference of Speakers of state legislatures of Nigeria.


He said they decided to host Rt Hon Oborevwori to celebrate and honour him for everything he stood for in the state.

He said the occasion was also to acknowledge and appreciate all those who God has used to put smiles on the faces of the people of Okpe kingdom in the “advent of political gangsterism and orchestrated campaign of calumny to ridicule Rt Hon Sheriff Oborevwori”.

Mr Siakpere who was represented by Dr Stephen Richards said that members of the team will redouble their efforts and renew their vigour and embark on door to door campaign in all the 270 wards and 25 local government areas in the state with a view to winning all elections for PDP candidates in the state come 2023.

Responding, the Delta State PDP Governorship Candidate for the 2023 general elections, Rt. Hon. Sheriff Francis Orohwedor Oborevwori, rained heavy knocks on the All Progressives Congress (APC) in Delta State, saying that the party has nothing to campaign with in the state.

He noted that the party has killed the economy with Nigerians facing challenges of poverty and insecurity, pointing out that APC has no visible project that it could use to campaign and that the time for Nigerians to send the party packing is now.

“What they have succeeded in doing is bringing poverty. The economy is dead. Insecurity in Nigeria is something you can’t talk about. Yet somebody said he wants to come and contest under that party in Delta State. We are waiting for APC in the State ,” Oborevwori said.

He appealed to his teeming supporters to vote for Alhaji Atiku Abubakar and Governor Ifeanyi Okowa, the PDP Presidential and Vice Presidential candidates respectively for the 2023 elections, noting that this will make the work load easy for him if he eventually becomes the governor of the state.

Speaking on the Supreme Court judgement, Rt Hon Oborevwori said he was never afraid because he believed that at the end of the day, he will be victorious.

Narrating the story of David in the Bible, the Delta State PDP Governorship Candidate who was accompanied by the Majority Leader of the Delta State House of Assembly, Hon Ferguson Onwo, said when God wants to use anybody, no man can stop it, adding that his gubernatorial ambition is a divine project.

“I am very happy for this hosting and what is happening in this Okpe Council Area today. Mr. John Ewhubare Siakpere started this movement a year ago. This is a project of an Okpe son, though he is based in London, he believes in this kingdom.

“The first time I met Mr John Ewhubare Siakpere in London one year ago, I told him, you are not a politician, why are you doing it. He said he is doing it for the interest of Okpe people. So, it is not about Sheriff, it is about the kingdom. He has done very well. To get money is difficult, and for somebody to sustain the spending over the years, he has done very well.

“The Team Siakpere for Sheriff is not my personal project. The whole essence is to say they will support anybody from Okpe kingdom that will run for governor of Delta state. The agenda is not for Sheriff. The agenda is for the kingdom. God will bless him,” Rt Hon Oborevwori said.

He commended the Team for not only spending money for the course but also for mobilizing people for the project, appealing to the team to continue to do their evangelism in all the nooks and crannies of the state.

He said the only thing that can make them actualize the 2023 dream is when the people use their Permanent Voters Card (PVC) to vote for him, imploring them that;” Get your PVCs, reach out to our people to vote PDP candidates all the way”

He said Governor Okowa had done very well in terms of infrastructure, human capital development and peace and security.

“I have told Deltans that I have a MORE agenda for them. The MORE agenda is Meaningful development, Opportunity for all, Realistic reforms and Enhanced Peace and security.

“I also told Deltans that I have a vision. The vision is to keep Delta State ahead in all aspects of social and economic well-being”.