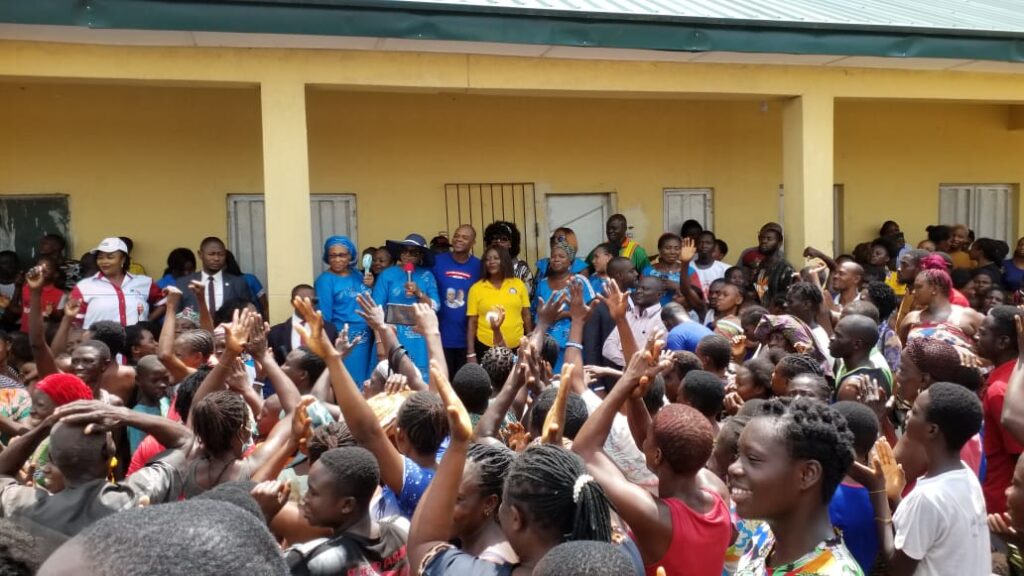 Wife of the Governor of Delta State, Dame Edith Okowa on Tuesday commended the President of UJA Foundation, Pastor Jonathan Ukodhiko for his philanthropy and donations to flood victims in Isoko Federal Constituency.

Mrs Okowa gave the commendation at Erawha-Oweh, during the official presentation of food items and relief materials worth millions of naira by UJA Foundation in collaboration with the 05-Initiative.

In her remarks, Mrs Okowa said the greatest gift a man can give to God is to love the neighbour and care for their needs.

She reiterated that society could be crime free if the needy were provided for and called on well-meaning individuals to emulate Ukodhiko’s kind gesture by making more donations towards the post-settlement of the flood victims.

“Its going to one month now that a lot of our people have been displaced from their homes as a result of the flood.

“This is the time for communal living as Africans that we are known for. What Ukodhiko has done today is a pointer to the fact that “We can reduce the rate of crime in our society by showing care, let us show care to our communities so that crime rate can reduce.

“Any position you are occupying is for you to do good for the people,” she said.

She urged the people to support Ukodhiko in his aspiration for more dividends of democracy.

On his part, Ukodhiko said he was moved by the challenges being faced by the Internally Displaced Persons and thanked Dame Okowa, the 05-Initiative and his friends for their partnership.

According to him, when the ravaging flood menace struck Isoko, some of us responded immediately, though not through donations first, but through immediate assessment of the situation and to ascertain how best to assist the people who are affected.

“Consequently, we visited several IDP camps and also commissioned a team of dedicated young men to move around with boats to the affected communities, to enable us have a piece of first-hand information about the needs of our people who are displaced by the devastating flood and how best to help them.

“After careful appraisal of the flood situation and having known the needs of our people who are displaced, I was passionately moved by the desire to assist our people.

“I immediately swung into action by discussing with my friends and an Assistance Initiative was birthed under the UJA Foundation, with the name; Isoko Flood Victims Assistance Scheme, powered By UJA Foundation and friends, in collaboration with 05-Initiative.

“I sincerely appreciate all my friends and associates, who heeded this noble call of charity and responded bountifully, may God in his infinite mercy reward them accordingly for donating toward this charitable gesture passionately without coercion but out of pure love and kindness,” he stated.

The items were presented to the IDP camps at Isoko Central School Oleh, Odoro Primary School Oleh, Alaka Grammar School Ozoro and other Isoko communities impacted by the rampaging flood.