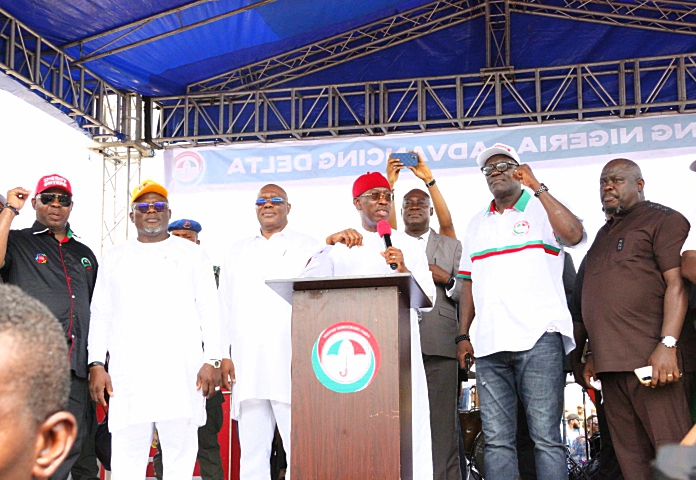 2023: Only PDP can reset Nigeria to working ways, says Okowa

Speaking at the inauguration of the Delta State PDP Campaign Council in Asaba, Okowa said only a party with relevant experience like the PDP could truly rescue, rebuild and reset the country into working again for the good of citizens.
He said that with the very poor state of the country only experienced leaders like Atiku Abubakar could bring Nigeria out of the current state of despondency caused by the incompetent and inept APC-led Federal Government.
“There is only one team that can deliver Nigeria out of where we are and that is the Atiku-Okowa ticket.
“I have looked at all of them and ordinarily they would have been capable in a country that works but we are now in a country that is not working so you need those who know what to do.
“It is the Atiku-Okowa ticket of the PDP that can take us out of where we are and move us forward.
“PDP won’t lie to Nigerians, we have a difficult task but working with Nigerians we will get the country working again,” he said.

He said the APC had led the country into a downward slide and assured the people of PDP’s mission to rescue and rebuild the nation.
“The APC has not done well for this nation, they have taken us into troubled times, they have made our people lose jobs, our people have lost their businesses, they have led us to insecurity.

“The only way they can possibly find a pathway to campaign is to lie but it is not good when people come out to lie in such a manner that even the blind will know that they are lying.

“They lied that we haven’t done anything in Asaba what about the storm drainages that prevented flood water from taking over people’s houses like it used to be in the past?

“What about the State Secretariat which is the best and most functional we have seen in the country.

“What about the Dennis Osadebay University, the Film Village and Leisure Park that will be inaugurated in January by our Presidential candidate, Atiku Abubakar? It will attract a lot of tourists to this state but they can’t see it.

“What about the roads, the flyover and interchange that we are helping the Federal Government to build?

“So let us go put there and convince the people to vote for us because it is a great opportunity to rescue this country and take it up into greater heights.

“They have driven us down the valley, we want to rise, its a tough task but Atiku Abubakar and I have accepted that working with all PDP members and all stakeholders in Nigeria including the organised private sector collectively we are able to take Nigeria back out of that valley and take it to greater heights,” Okowa stated.

Governorship candidate of the party and Speaker of the State House of Assembly, Chief Sheriff Oborevwori commended Okowa for his political sagacity and adroit leadership skills which he had deployed in managing the affairs of the party since 2015.

He said the massive achievements of Governor Okowa had made campaigns easier for the party in the state.

He took a swipe at Omo-Agege, saying his tenure as Secretary to the State Government was characterised by parochialism, greed, abuse of power, and undemocratic tendencies.

Deltans do not need a despot like Omo-Agege, but a liberal, broadminded, and selfless leader like myself who stands for equity and fairness.

He said his M.O.R.E Agenda: Meaningful Development, Opportunities for All, Realistic Reforms, and Enhanced Peace and Security was geared towards consolidating and extending the gains of the current administration.

“It is designed to continue and expand the infrastructural and human capital development programmes of the Okowa administration.

“The vision is to keep Delta State ahead in all aspects of social and economic well-being and it is my promise to all Deltans that I will listen more, do more, and achieve more,” he stated.

State Chairman of the party, Chief Kingsley Esiso said the ceremony marks the commencement of the party’s campaign to the Presidency and Government House Asaba.

He slammed the Deputy President of the Senate and APC Governorship candidate Senator Ovie Omo-Agege for not using his acclaimed capacity to influence the reconstruction of the various federal roads in the state.

He said Omo-Agege’s self-acclaimed capacity was to influence projects to his own Orogun community to the detriment of other communities in his Senatorial District.

He urged members of the Campaign Council to concentrate on their various units, wards and local governments and work hard to woo more people to the party.

“We have started our campaign that will lead to the rescue and resetting of Nigeria. There is no doubt that the APC has failed Nigerians as prices of commodities have gone beyond the reach of the common man.”