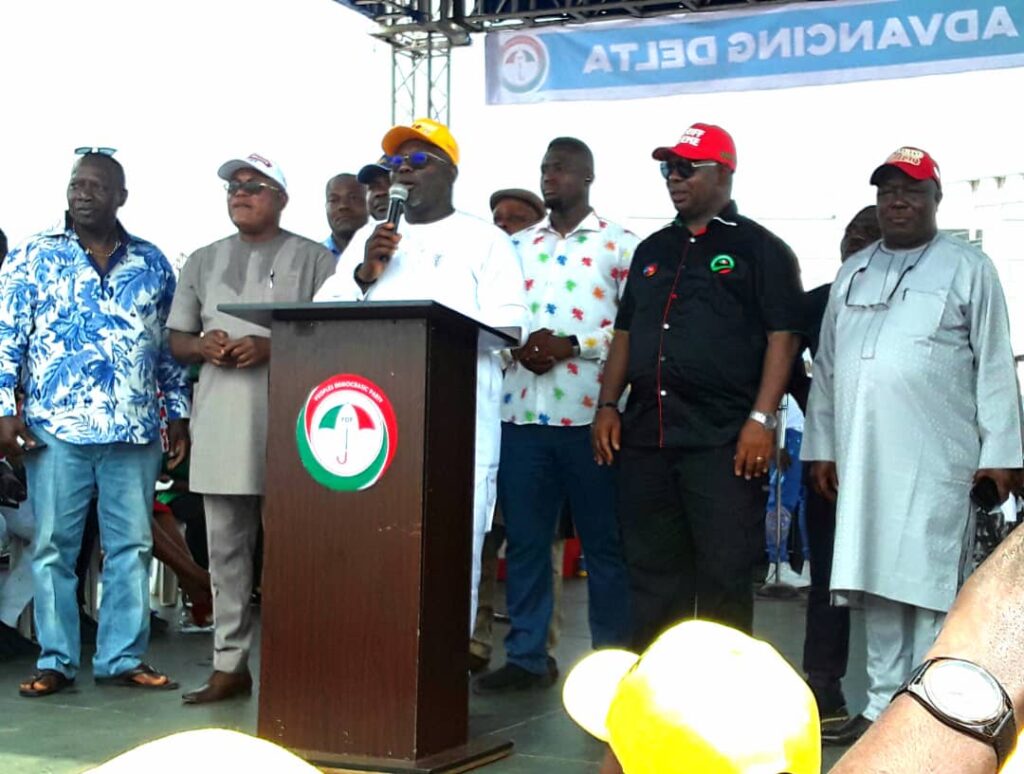 Oborevwori to Omo-Agege: You’re a despot not needed as governor in Delta; says current Senate the worst ever

Delta State Peoples Democratic Party (PDP) Governorship Candidate, Rt. Hon. Sheriff Oborevwori has described the Deputy Senate President, Ovie Omo-Agege as a despot who is not needed by Deltans as their Governor next year.

Oborevwori made the remark in his address at the inauguration of the Delta State PDP Campaign Management Committee, on Thursday, November 3rd, 2022, in Asaba, the State Capital,
He said that the current Senate of the Federal Republic of Nigeria, of which Omo-Agege is the Deputy Senate President is the worst ever in the history of Nigeria.

His words at the carnival-like event: “The other day I listened to the brash and unguarded utterances of the APC governorship candidate in Delta State. I wish to remind Deltans that all well-meaning Nigerians agree that the current Senate of the Federal Republic of Nigeria, of which Omo-Agege is the Deputy President, is the worst in the history of Nigeria. Courtesy of this toothless, docile, and rubber stamp Senate, Nigeria’s external debt portfolio currently stands at $40b as at the second quarter of this year. With hyperinflation, naira free fall, escalating food prices, widespread poverty, dilapidated state of federal roads, labour discontent, and general insecurity, let Omo-Agege tell Deltans what these monies were used for.

“Lest we forget, Omo-Agege’s tenure as Secretary to the Delta State Government was characterized by parochialism, greed, abuse of power, and undemocratic tendencies. The records are there for anybody who cares to check. Let me stop here for now but suffice it to say that Deltans do not need a despot like Omo-Agege, but a liberal, broadminded, and selfless leader like myself who stands for equity and fairness.’

Rt. Hon. Oborevwori appealed to all members of the PDP to remain focused and dedicated to delivering all the PDP candidates at the federal and state levels, saying that; “The strength of the PDP is in the grassroots. I, therefore, enjoin us to pound the pavements in our wards and units and make door-to-door campaign our priority. Unity must be our watchword. Where there are disagreements or grievances, we must act fast and resolve it quickly to ensure that everybody is carried along. The umbrella is big enough to accommodate everybody. Together, we can get it done”.

The Delta State PDP Governorship Candidate who is also the Speaker of the State House of Assembly said; “Permit me to comment on my stewardship as the Speaker of the Delta State House of Assembly. I am very proud of the job the 6th and 7th Assemblies have done in working with the executive to implement its policies and programmes. There are some misguided people who think that the relationship between the Legislature and the Executive must be adversarial. How mistaken”.

According to him, the idea of checks and balances was not for the legislature to become a clog in the wheel of progress but to ensure that there was mutual respect and cooperation in handling governance issues, adding that; “The fact that you sometimes disagree does not mean you have to be disagreeable. But through dialogue you can iron out your differences in a mature and civilized manner in order to move the ship of state forward. This is what the House has done under my stewardship, and the evidence of the positive impacts of government’s policies and programmes abound everywhere in the state.

“I thank God for the opportunity to address you today as the flagbearer of our great party in the 2023 gubernatorial election. I believe I speak the minds of majority of us here when I say that, the last five months have been quite exacting. There have been anxious and trying moments but at the end of the day, we have come out better, stronger, more united, and determined to deliver all the PDP candidates in the forthcoming general elections”, he said.

Rt Hon Oborevwori expressed his profound gratitude and appreciation to everyone for the confidence reposed in him to fly the flag of the party in the governorship election, saying that; “It is quite humbling, and with God’s enabling grace, I pledge to deploy everything at my disposal to ensure that the hopes and aspirations of all our party members are realised,” said, adding:

“Before I proceed further, it is proper that I specially appreciate our leader, His Excellency, Senator, (Dr) Ifeanyi Okowa, CON, our amiable Governor and party’s Vice-Presidential Candidate for his exemplary, Godly, and effective leadership. I recall that Governor Okowa took over the reins of leadership at a very difficult time not only in the country but also in the PDP. For the first time since the inception of the current democratic dispensation, the PDP was in opposition at the federal level and the governor was confronted with the onerous task of keeping intact a political family that was not used to being in the opposition.

“Thanks to his political sagacity and adroit leadership, Delta PDP was able to weather the storm. The Governor ensured that party chieftains, especially those disappointed by the outcome of the party primaries in 2014, were embraced with open arms, and treated with dignity and respect. Even the few that jumped ship soon made a comeback when they saw the disposition of our trailblazing governor towards peace, reconciliation, and unity. As a result, the Delta State PDP has continued to wax stronger”, he said.

Rt Hon Oborevwori, who is also the National Deputy Chairman of the Conference of Speakers of state legislatures of Nigeria also pointed out that; “As we have inaugurated the Campaign Management Committee today, I want to stress that Governor Okowa has made our job of campaigning easier. Much easier! The groundbreaking strides of his administration in road and physical infrastructure, urban renewal, entrepreneurship development for our youths, healthcare delivery, and vocational/technical education have touched every part of the state. It is only those who are dishonest or blind – or both – that will have the guts to say otherwise”.

He continued: “Those of us who live in Asaba know what it used to be like living here pre-2015. Thanks to the Asaba Storm Water Drainage, we can now sleep with both eyes closed when it rains. The Prof. Chike Edozien Central Secretariat Complex stands tall above the noise and cynicism of naysayers, mischief makers, and armchair critics. Roads and bridges of strategic importance have been, and continue to be constructed across the length and breadth of Delta State. Testimonies abound of our youths who are now successful business owners and employers of labour following their empowerment through the administration’s multiple entrepreneurship development programmes. I can go on and on but the point is that we have what it takes to convince our people that PDP remains their best option”, he stated.

According to the Delta State PDP Governorship Candidate, “It is axiomatic that you do not change a winning formula. Hence, my M.O.R.E agenda is geared at consolidating and extending the gains of the current administration. It is designed to continue and expand the infrastructural and human capital development programmes of the Okowa administration.
“The vision is to keep Delta State ahead in all aspects of social and economic wellbeing.For those who may still be in the dark, M.O.R.E is an acronym for: Meaningful Development, Opportunities for All, Realistic Reforms and enhanced peace and security. My promise to all Deltans is that I will listen more, do more, and achieve more”.