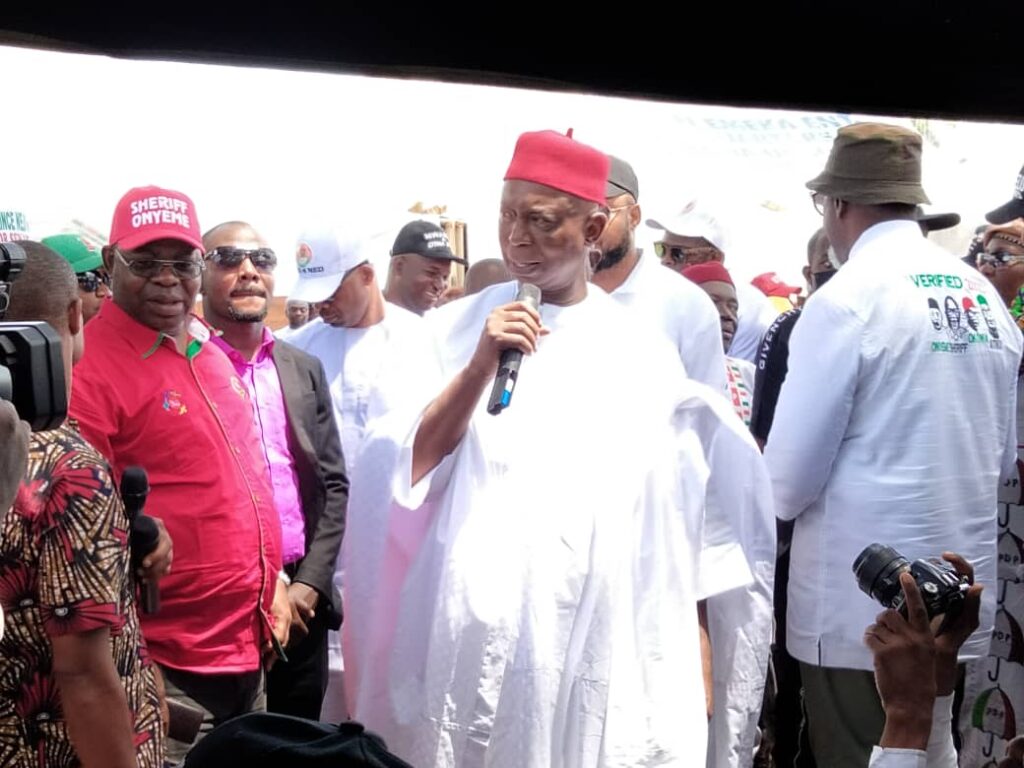 Peoples Democratic Party (PDP) Delta North Monday kicked off Ward campaigns with a call on party supporters and faithful to vote for all the candidates of PDP in the 2023 general elections by engaging the five-over-five formula to return the country to winning ways again. The refrain in the mouth of all is “PDP All-the-way.”

This was the message the party and its candidates handed to PDP faithful and other voters when they took campaigns to the wards in Aniocha North.

The Aniocha North PDP Campaign Coordinator, Deacon Chux Nwaebuni after welcoming the campaign train, invited Elder Iduh to kick start the event in his capacity as Delta North PDP Chairman to take charge thereafter. It was the pattern all through the visit and the message was the same.

He said it was therefore necessary that Delta North voters reciprocate this gesture by voting massively for all the candidates of the party on all the ballots. Iduh said: “This is the time to appreciate the good works of Okowa by voting all-the-way for all the PDP candidates in the elections.

“Any vote that is not for PDP is a waste,” Iduh said. He then called for a house-to-house campaign, imploring PDP members to tell their people the need to vote for PDP so as not to waste their votes because PDP is Delta State and Delta State is PDP.
He also implored them to vote for the Rt. Hon. Sheriff Oborevwori, the Governorship candidate, and Sir Monday Onyeme, the Deputy Governorship candidate. “All PDP wards should reciprocate the gesture of the good works of the PDP-led administration in Delta State by voting five-over-five for PDP.
He said: “Anyone working for PDP to have four over five is an enemy of PDP, enemy of Delta North, enemy of Delta State – the PDP agenda is five-over-five total.

At each point Iduh introduced each of the candidates to the people, all of who took turns to address the people, canvassing for their votes.

The Deputy Governorship Candidate, Sir Monday Onyeme, who spoke also on behalf of Oborevwori, called on the people to deliver what he called “gbim” votes for PDP. He gave a challenge that the ward that cast the highest “gbim votes” for the party to win the presidential election, and governorship elections will receive N5 million, the ward with the second highest vote to deliver PDP will get N3 million, while the ward with the third highest vote will receive N1.5 million. Onyeme then challenged the various wards to work hard for the party’s victory.

Emeka Nwaobi, Aniocha North candidate spoke in the same manner, that Delta North Senatorial Chairman spoke, calling for votes for PDP all-the-way.
For the Minority Leader, Ndudi Elumelu, his message is from Atiku Abubakar, PDP presidential candidate, and Dr. Ifeanyi Okowa, the Vice-Presidential candidate that voting for them is voting to reset Nigeria for real and authentic change, and as a boost for legislative work for him and Prince Ned Nwoko, the Senatorial candidate, as well canvased for Oborevwori, the Governorship candidate and Onyeme, Deputy Governorship candidate, Rt. Hon. Ndudi Elumelu, House of Representatives and Emeka Nwaobi, the House of Assembly candidate.

Prince Ned Nwoko, the senatorial candidate, who came in with his beautiful wife, Regina, told people to vote PDP all-the-way for good governance. He said: “What we are working for is PDP all-the-way. Don’t make the mistake of voting Labour Party, because it will not win. For the first time, Delta State will produce the Vice-President of Nigeria. When you vote for me as Senator, Atiku and Okowa ticket, Ndudi Elumelu, Oborevwori, and Onyeme you will be voting for an open door policy.
“I want to be a useful Senator, and for this to happen we must have PDP all-the- way,” Prince Nwoko said, adding: “vote PDP candidates because they all have experience.”