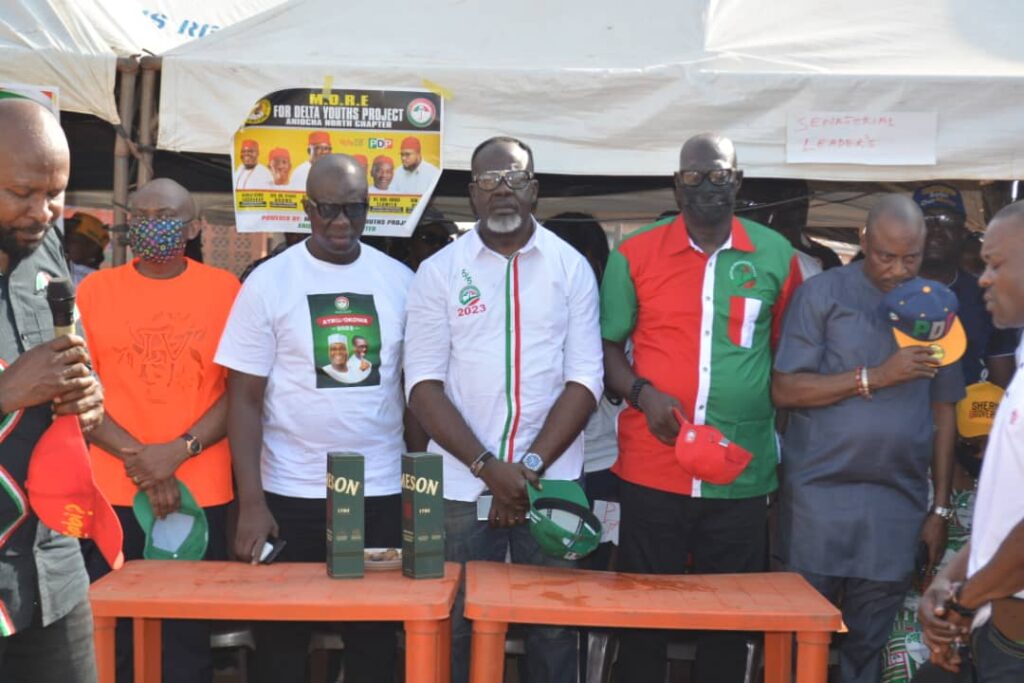 Voters in Delta North have been called upon to reciprocate the gesture of picking the Delta Governor, Senator, Dr. Ifeanyi Okowa as Vice-Presidential candidate of the Peoples Democratic Party (PDP) from the senatorial zone by voting massively for PDP.

Also, Delta North senatorial candidate, Prince Ned Nwoko assured youths that he would sponsor a bill for the setting up of a Trust Fund to be accessed by business-oriented youths to the tune of =N=50 million each to enable the youths fully explore their potentials.
The PDP State Chairman, Olorogun, Barr. Kingsley Esiso assured the people of Aniocha North that the party will come to power at the Federal level and rescue Nigeria from the decadence that APC has sunk it, pointing out that “your senatorial candidate has no opponent because we have chased away the one that would have been his opponent away.”

PDP Delta North senatorial Chairman, Elder Moses Iduh, and Minority Leader of the House of Representatives, Rt. Hon. Ndudi Elumelu and other candidates canvased this position on Tuesday, day two of the Ward campaigns in the senatorial zone.

The Senatorial candidate of Delta North, Prince Ned Nwoko told the youths to discountenance Labour Party’s Presidential Candidate, Mr. Peter Obi, saying Obi is not the solution to resolving the plight of the neglected youths.

Urging youths to have faith and vote in the Presidential Candidate of PDP, Atiku Abubakar because he holds the ace to reviving the destiny of Nigeria’s youth, Nwoko said: “. The election that we are going into is a very different election. In Nigeria, the issue that we have is the marginalization of youths. Many youths have experienced helplessness. But the situation will change for the better under a PDP Federal Government of Atiku Abubakar and Senator, Dr. Ifeanyi Okowa as Vice-President.”

Prince Nwoko said he had already discussed with Atiku and Okowa that a PDP Federal Government must set up a Trust Fund for the youths from which they will access =N=50 million for business purposes. “It’s not for you to buy a car or build houses. Every youth that gets this money will be required to employ at least four other persons. This time around, we will do things differently in PDP,” he promised.
Nwoko then counseled the youths to ensure that they play their parts positively by voting in the PDP’s rescue team to be led by Atiku Abubakar as President and Senator, Dr. Ifeanyi Okowa as Vice-President, as well as all the PDP candidates at the National and State levels across board.
“You must make sure that a PDP President is elected; vote for me and Ndudi Elumelu for the National Assembly, the Governorship Candidate, Sheriff Oborevwori and Monday Onyeme, the Deputy Governorship candidate and Emeka Nwaobi, the State House of Assembly candidate,” Ned Nwoko said.