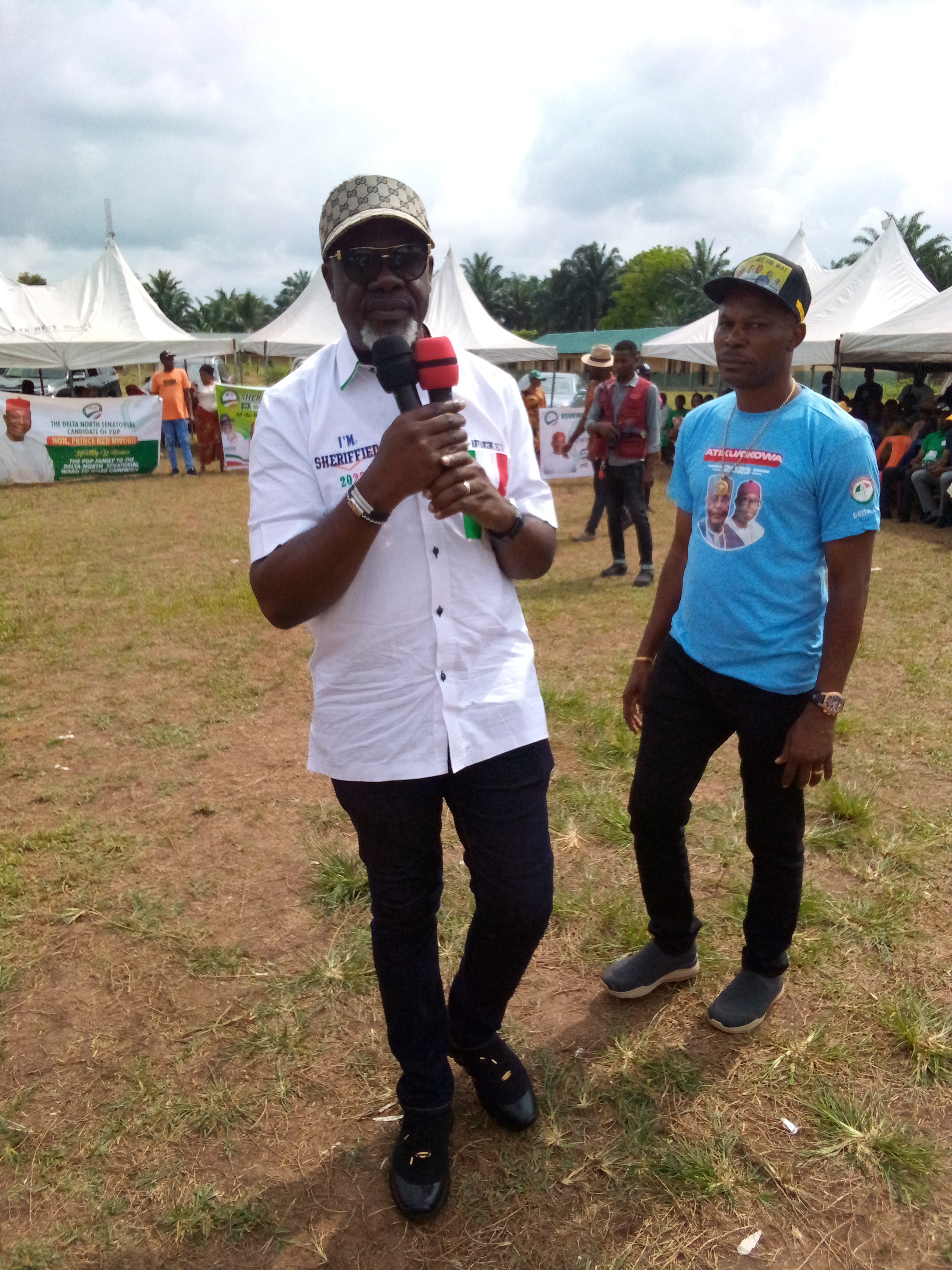 All Progressives Congress (APC) has been told to apologise to Nigerians for mismanaging the fortunes of Nigeria and misgoverning the country, a situation that made them morally unqualified to field candidates for the 2023 election,

The Director General who described APC as the ‘Association of Poverty Creators’ called on the people to reject APC because of the hardship its maladministration has brought upon the nation.

Rt. Hon. Funkekeme Solomon called on the Anioma Nation to count themselves fortunate, for being blessed to produce the Governor of the State, Senator, Dr. Ifeanyi Okowa, who has now emerged as the Vice-Presidential candidate of the PDP. “Anioma is blessed by God; it’s rare to produce a Governor, who is also going ahead to become Vice-President. It, therefore behoves Anioma nation to take responsibility by supporting and massively ensuring that the PDP is voted for so that their son can become the Vice-President in 2023,” Solomon said.

He pointed out that Okowa has shown capacity in his performance as Governor of Delta State, therefore, now is the time to work harder to ensure that the grassroots voters are mobilised to cast their votes for all the candidates of the PDP.

Earlier, Delta North Senatorial Chairman of the Peoples Democratic Party (PDP), Elder Moses Iduh charged party faithful and supporters to be diligent in casting their ballots massively for the party. So as to achieve the rescue mission to reset Nigeria by PDP.

Iduh spoke when he led the Delta North PDP campaign train Thursday, November 10, 2022 to five wards in Aniocha South Local Government Area of Delta State amidst a momentary shower of blessings when the cloud released rainfall at Ward 10, Aba-Unor, pointing out that it has become imperative to drive out All Progressive Congress-led Federal Government that has brought untold hardship to the good people of Nigeria.

“Tell everyone why they must vote PDP all-the-way in the 2023 elections, because vote for the APC or any other party apart from the PDP is a wasted vote,” Iduh said, adding: “PDP wants to rescue this nation. We want to give hope to the hopeless.”

Iduh urged the people to understand that Governor Okowa having emerged as a Vice-Presidential candidate has made it mandatory that the people of Delta North and Aniocha South, in particular, must vote for PDP on a Five-Over-Five basis as an expression of gratitude for the emergence of “our son, brother, and friend” as Vice-Presidential candidate. This is a great honour that the people of Delta North must appreciate and vote massively for the PDP and all its candidates in the 2023 elections,” Elder Iduh said.

He, therefore, called on the people of the ward to go out there to the community people, the youth, men, and women; go from house-to-house, and to the churches to tell them why they must vote PDP all-the-way.

The House of Representatives candidate of the PDP, and Minority Leader, Ndudi Elumelu supporting what the Delta North Chairman, said: “APC has misruled and mismanaged Nigeria. Foreign exchange is now beyond reach, farmers can’t go to the farms anymore, APC has foisted insecurity everywhere in the country so much so that movement has become a nightmare to Nigerians and lack of employment for the youths.”

The Senatorial candidate, Prince Ned Nwoko who said he felt for the youth urged them to discountenance voting for any other party, but should cast their votes for PDP. ” I feel your anguish; Nigeria has not been fair to the youths,” Nwoko said, and told the youths that if PDP is voted into Government, he would initiate a bill for a law that will set up a Trust Fund from which 0ne million Nigeria youths every year will access =N=50 million to support their businesses.

The highlight of the Aniocha South Ward campaign was the sudden rainfall that came as showers of blessing and cooling the hot atmosphere.