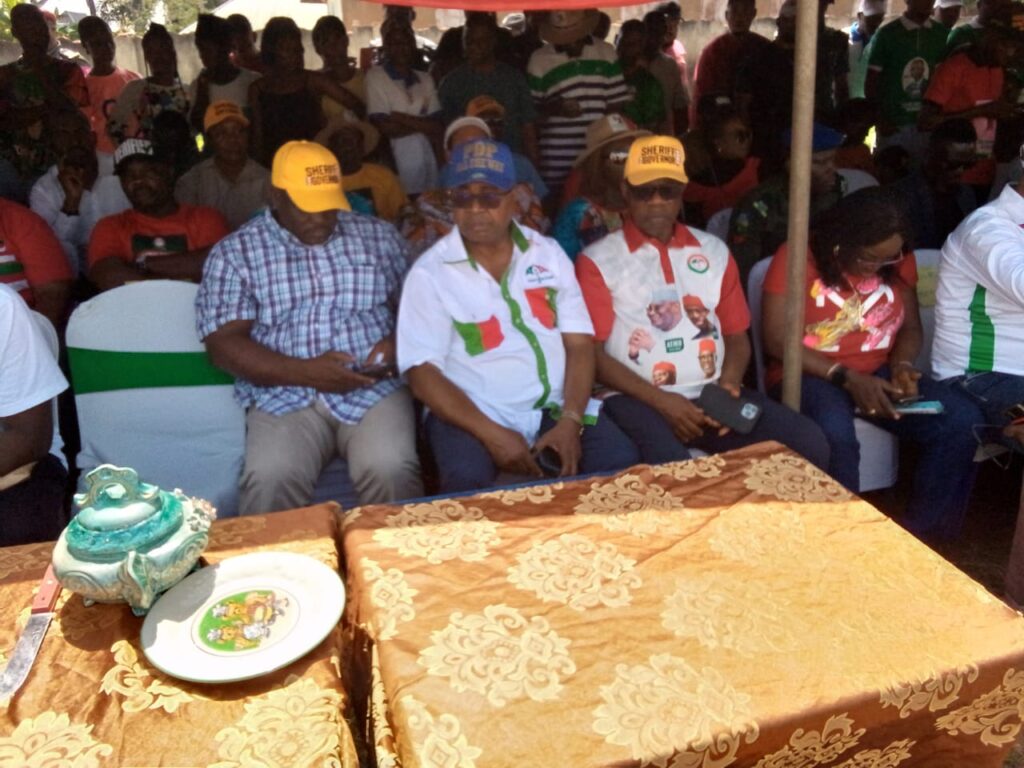 Peoples Democratic Party (PDP) leaders have been charged to work hard to ensure that Delta North produces more overwhelming votes than the Central and South Senatorial Districts of Delta State during the Presidential elections in 2023.

For notable PDP leader, High Chief Godswill Obielum, Nigerians have only the choice to vote PDP all-the-way because the All Progressives Congress (APC) led Federal Government has failed them. He said: “It’s PDP all-the-way; we have to rescue and save Nigeria,” he said.
For those saying that PDP was there for 16 years, Obielum said: “Those people must know when PDP was there, how much was fuel? How much was the Dollar to the Naira? Besides, a lot of things are happening, banditry, insecurity is now the order of the day. When PDP returns to power, we will do better than before.”

For PDP Delta North Senatorial Chairman, Elder Moses Iduh, who led the party’s campaign train to Ward 3 at Ozanogogo, Ward one at Ime-obi, Ward 2 and Ward 4 at Alihagu, all in Ika South Local Government Area, said the charge became necessary because the party’s Vice-Presidential candidate, Senator, Dr. Ifeanyi Okowa, the Governor of Delta State is from Ika in Delta North. “It, therefore behoves on the people of Delta North to go all out from house-to-house to convince those who are not yet decided that voting for PDP is the only hope they have to change the negatives of the All Progressives Congress (APC) to positive change that Nigerians earnestly yearn for now,” he said.

He continued: “Our youths are clamouring to leave Nigeria because things are not right with the Country. Even the rich in Nigeria are crying. But there’s hope for Nigeria with PDP. Our party has all it takes to rebuild and rebrand this Nation. Therefore, you must work on those who must be convinced to see the need for them to cast their votes for all PDP candidates. Because it is the only party that can salvage the Country from the mess into which APC has dumped her.
“Go to your market places, go to the churches, go to okada riders and others and let them understand why they must vote for PDP all-the-way – five-over-five,” the Senatorial party Chairman said.

Elder Iduh, who was flanked on the high table by notable PDP leaders in Delta North, including High Chief Godswill Obielum, Deputy Speaker, Delta State House of Assembly, Rt. Hon. Ochor Christopher Ochor, former Speaker of Delta State House of Assembly, Rt. Hon. Martin Okonta, Chief Nkem Okwuofu, Delta North’s Senatorial candidate, Prince Ned Nwoko, and wife, Regina, among others, also reminded the people of Delta North why it is imperative for them to vote for PDP to win overwhelmingly, said: “We have never seen or had a Vice-Presidential candidate, and now that one of us has emerged as the Vice-Presidential candidate of PDP, it has become imperative for us to work hard to ensure that PDP is voted for overwhelmingly for Okowa to emerge as thr Vice-President of Nigeria.”

The candidates on the campaign trail included the Senatorial candidate, Prince Ned Nwoko, accompanied by his wife, Regina, and the PDP House of Assembly candidate for Ika South, Hon. Festus Okoh.
Iduh announced that the House of Representatives candidate, Rt. Hon. Victor Nwokolo, and the Deputy Governorship candidate, Sir Monday Onyeme, were not around because they were involved in other engagements.
Senatorial candidate, Prince Ned Nwoko told the youths that his focus would be on them, and urged them to vote massively for PDP candidates so as to change positively their life situation. “Labour party cannot but PDP will. So vote for PDP so that we can work and bring policies that will turn around the fortunes of Nigeria’s youths.
Nwoko said: “My focus is on the youths because I feel for them. This election is like no other. But the first thing is that an Ika, a Delta North son is going to be the Vice-President and that Okowa can easily become the President of Nigeria after Atiku.”

He urged the youths not to make the mistake of voting for Obi. According to him, Peter Obi will come a distant third after the elections.
“Any vote for Labour Party is a wasted vote,” Prince Nwoko said.

Hon. Festus Okoh aka Chuky Dandy, the House of Assembly candidate pleaded with the people to go on house-to-house campaign to win voters over and convince them to vote for PDP. “Go from house-to-house to evangelise those in the opposition and win them over to PDP, because PDP is the way out of Nigeria’s current quagmire,” Hon. Okoh said.

All the Chairmen of the Wards visited for the campaign assured of five-over-five votes for PDP, pointing out that all the Wards are PDP.
At Alihagu Ward 4, the Chairman requested that the bad state of the community roads be looked into, to which Hon. Festus Okoh assured that the road issue would be in the State Government’s budget for 2023 for action.