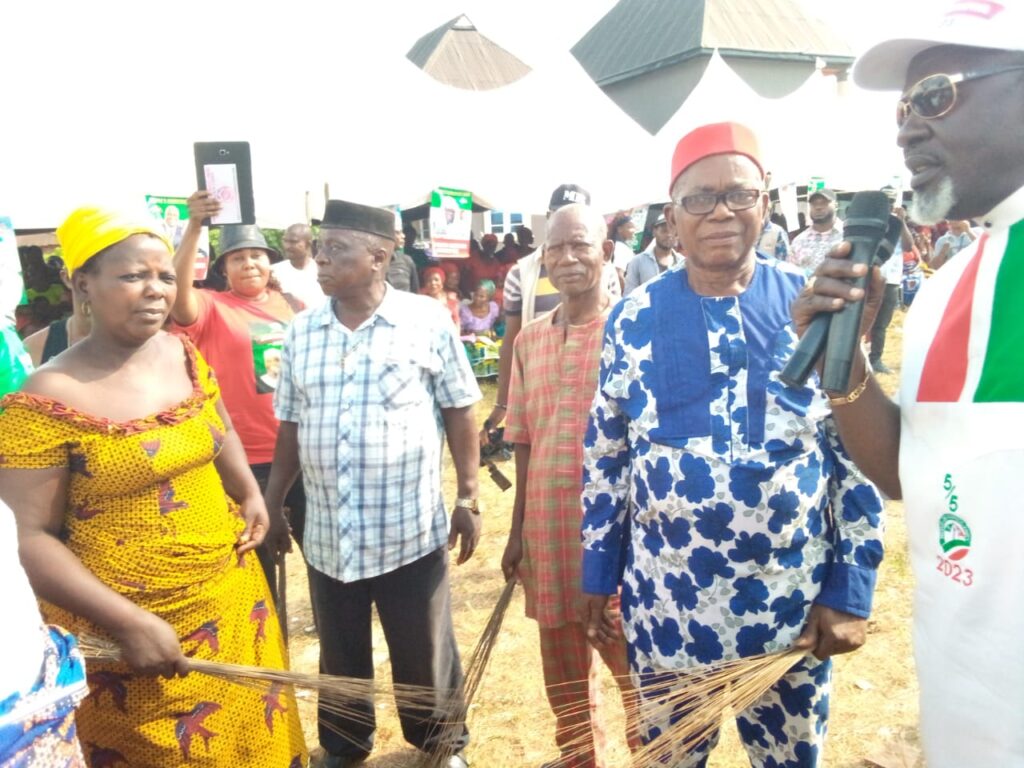 The Moses Iduh-led Delta North Campaign train of Peoples Democratic Party (PDP) Thursday opened up its large umbrella, and took into its fold All Progressives Congress (APC) and Labour Party (LP) members in Ward 11, at Alidogun, Igbogili community and Ward 5 at Ekukwu-Agbor, Ika South Local Government Area who dumped and embraced PDP with a pledge to henceforth work for the victory of all PDP candidates in the 2023 elections.

The situation which can be likened to the gulping down and deleting of the APC, LP and all other opposition parties from the wards, saw the decampees threw down their brooms, denounced the opposition parties and declared their support for PDP and pledged to work to deliver their votes PDP 100 per cent in the pattern of five-over-five.

Mr. Agbontai Kingsley, who described himself as the former LP secretary in the ward, and had been mobilizing members for the party said having seen the good works by the Governor Ifeanyi Okowa-led PDP government in the state, and the efforts made by the leaders of the party in coming to woo him, and his supporters, he felt totally convinced that the only way to appreciate the good works of the PDP administration in the community is to embrace the PDP and support and work for the election of all the candidates of the party and the emergence of the PDP presidential candidate, Atiku Abubakar, as president and Senator (Dr) Ifeanyi Okowa as the next vice president of Nigeria.

Mr. Egbule Austin, the APC leader in the ward who dumped the party on account of bad performance also came with his supporters.

At Ward 5, the past APC chairman, Mr. Onyema Libenson, who dumped the party and embraced PDP announced that he and those dumping the APC were previously in PDP, but have now decided to return to PDP because of the good work that the PDP administration has done in their community.

Mr. Onyema said: “I have seen the good works done; our women traders are doing well because they are being offered assistance. Our youths are being empowered by the PDP administration in Delta State. APC has no administration. If APC wins again, things will be difficult for people in Nigeria. Buhari and the APC have failed.”

Those who dumped the APC and LP were received into PDP by the Delta State PDP Chairman Olorogun (Barr) Kingsley Esiso who welcomed the decampees into PDP said it was good they decided early not to waste their votes by voting for APC, LP or any opposition party in the state. He called on the ward communities not to vote for APC, “the party that brought hunger, insecurity, and economic wickedness to Nigeria.”

Esiso told the decampees that they are entitled to same privileges enjoyed by those they have copme to meet in PDP.