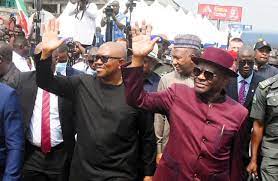 It’s one of several visits in the course of the presidential run of the Labour Party candidate, Peter Obi, to Rivers State Governor Nyesom Wike – leader of the rebellious group of five governors (PDP-G5) in the main opposition Peoples Democratic Party. But this visit was special!
Obi honoured the November 17, 2022, courtesy to commission the Nkpolu-Oroworokwo Flyover in Port Harcourt – the ninth of such high-rise legacy roads built by the Wike administration since 2015.
Obi, accompanied by his running mate, Yusuf Datti Baba-Ahmed, was welcomed into Port Harcourt – and to the venue of the project launch – by a monstrous crowd of the “ObIdients” – supporters of the Obi-Datti campaign.


While he’s on it, Obi had an ace up his sleeve: To put in a word for himself as regards the February-March 2023 General Election, which he’d entered as an underdog, but has gained a frontline status in a matter of months.
Obi, who’s prepared to “kneel and beg” to conquer, urged Wike to allow him claim the presidential poll in Rivers, and in exchange, oblige Wike the freedom to produce the next governor on the platform of the PDP.
For the quid pro quo (I rub your back, you rub my back) strategy, Obi pledged: “I will talk to my people and we will negotiate. If we leave the state (governor’s slot) for him (Wike), he will leave the centre (president’s post) for us.
“We will not quarrel with you (Wike). Please, give us this one (presidency) and collect the other one (governorship). I will accommodate them (Rivers people) in the other one (Obi’s government, if he’s elected president in 2023).
“Remember this agreement today. I’m kneeling down and begging, take this one (governorship), and give me this one (presidency). I assure you the one I will take, I will use it to make sure Rivers State becomes better and better.”
To show LP’s willingness to forego the governorship for the PDP in the March 2023 poll, Obi proclaimed the PDP candidate, Siminialayi Fubara, as “the incoming Governor,” to the applause of the LP members and supporters.
Though Wike didn’t respond in kind to Obi’s entreaty, he described him as “a former governor, a presidential candidate, and a very humble man,” and promised that, “as a state government, we will give you (Obi) logistics support for your campaigns.”
“Each time you want to campaign in the state, let me know. All the logistics support, we will give to you,” Wike told an elated Obi, who’s among top tier candidates wooing Wike and his PDP-G5 colleagues for poll collaboration or outright defection to their parties.
The PDP-G5 fell out with the party leadership in May 2022, aftermath of the presidential primaries in which Wike came second to former Vice President Atiku Abubakar.
Wike, who blamed the party for swinging the ticket for Atiku, solidified his anger when Atiku sidestepped him to pick Delta State Governor Ifeanyi Okowa as running mate.
Wike’s the backing of four governors: Messrs Okezie Ikpeazu of Abia State, Samuel Ortom (Benue), Ifeanyi Ugwuanyi (Enugu) and Seyi Makinde of Oyo State, and many past governors and chieftains of the party.
With this strong force virtually at his beck and call, Wike demanded resignation of PDP’s National Chairman Iyorcha Ayu, as precondition for his group’s support for particularly the Atiku-Okowa ticket in the 2023 elections.
Dr Ayu’s shunned the pressure to resign as the PDP chair, resulting in hardening of positions on either side, with Wike and the PDP-G5 boycotting the party’s activities, including membership of the Presidential Campaign Council, and launch of the council and the Atiku-Okowa campaigns.
Now the “beautiful bride” of the 2023 election cycle, Wike’s courted by the candidates and surrogates of the leading parties: Atiku of the PDP; Bola Ahmed Tinubu of the All Progressives Congress; Obi of the LP; and Rabiu Musa Kwankwaso of the New Nigeria Peoples Party.
Wike’s routinely invited especially prominent members of the PDP to commission projects in Rivers, using the made-for-television avenues for photo-ups and campaigns.
The pace of such invites has increased in the 2023 poll season, particularly to opposition politicians, and Wike deploys the occasions to mend fences he’d broken in his fierce projection and defence of PDP and its members.
Former Edo State governor and past national chairman of the APC, Comrade Adams Oshiomhole, was Wike’s guest barely 24 hours pre-Obi’s invite to commission a project.
Oshiomhole, in Port Harcourt on November 16 to inaugurate the Rumuepirikom Flyover – the 8th under Wike’s belt – received an apology for being the target of Wike’s attacks during the 2020 governorship poll in Edo.
Wike, as PDP’s lightning rod against Oshiomhole and APC’s onslaught, had campaigned for the re-election of Governor Godwin Obaseki, who’s denied the APC ticket at the primaries conducted by then Oshiomhole-headed National Working Committee.
But two years down the line – and with Wike and Obaseki becoming strange bedfellows in the PDP – Wike told Oshiomhole: “You know I came to Edo State to make sure your candidate (Osaze Ize-Iyamu) didn’t win election. I was virtually in charge, everyday coming out on television to take you on.
“And I said you will not win, and you didn’t win. Well, that assignment has been done, we now know who is who. I want to tell my people, I sincerely apologise to you.”
This turnaround happens in politics in which there’re no permanent enemies but permanent interests, such that would bring Wike and Oshiomhole together while they stump for different political parties and candidates for 2023.
It’s those permanent interests that’ve kept Obi going to Port Harcourt, to meet and woo Wike who, despite his entanglement with the PDP leadership, has committed to remaining in the party, even as he’s shown a seeming inclination to collaborate with opposition candidates.
In that wise, can Wike level with Obi in his promise of logistics support to the Obi-Datti campaign in Rivers? Is the gesture the game-changer for the former Anambra State governor to advance his aspiration at this critical stage on the road to 2023? We’ll explore this further!