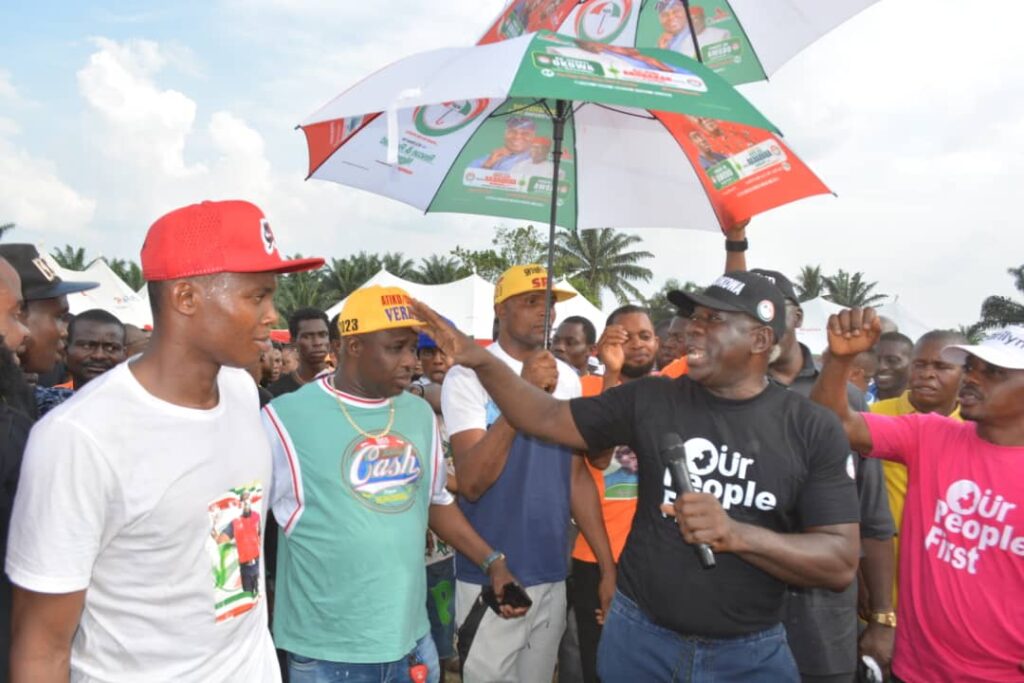 The Peoples Democratic Party (PDP) Delta North Ward Campaign train continued in Ika North East Local Government Area Tuesday with calls on party faithful and supporters not to relent but increase their work tempo to ensure that no other political party but PDP has a foothold in any Ward across the Senatorial District.

At each Ward visited which became a carnival of sorts, PDP Delta North Chairman and campaign leader, Elder Moses Iduh told the people that the campaign train did not come to actually campaign, knowing that the Wards in the Local Government are PDP, but just to reiterate all that has been said elsewhere that party supporters must not let down their guards in giving support to PDP and voting all the candidates fielded for the 2023 elections in the pattern of five-over-five and PDP all-the-way.

All the party’s candidates who were on ground including the Delta North Senatorial candidate, Prince Ned Nwoko, the Deputy Governorship candidate, Sir Monday Onyeme, and Mrs. Marilyn Okowa-Daramola, the Delta House of Assembly candidate. The House of Representatives candidate, Hon. Victor Nwokolo was unavoidably absent, because of an urgent engagement in Abuja.

At Ward 14, Otolokpo, and in all the other Wards, Elder Iduh reminded the people why all votes in all the Wards must count for PDP. He said: “No right-thinking Nigerian who abhors suffering will go ahead to vote for the All Progressives Congress (APC). And because everyone wants to change the negative change that the APC-led Federal Government has brought to the Country, people must vote for PDP, the party that knows how to take care of the interest of the citizens. It is a known fact that in all the Wards, the only party on ground is PDP, and there’s no other party.”

Urging the people to remain consistent by voting for all PDP candidates, the Delta North PDP Chairman said: “vote for all PDP candidates, from the Atiku-Okowa Presidential ticket, the Sheriff-Onyeme Governorship ticket, the Ned Nwoko Senatorial ticket, the Hon. Victor Nwokolo House of Representatives ticket to the Marilyn Okowa-Daramola House of Assembly ticket. All our candidates for the 2023 elections are, therefore, done deals. Vote PDP five-over-five all-the-way,” adding that what PDP can do for the people, APC and Labour Party cannot do.

At Ute-Okpu Ward 9, the Ward of Mr. Hilary Ibegbulem, the Principal Secretary to Governor Ifeanyi Okowa and Vice-Presidential candidate of PDP, he urged the campaign train to be rest assured that it is PDP that has always held sway in the Ward since 1999, and that no other party exists in the Ward.

He then introduced the candidates one after the other to the people amid eulogies.