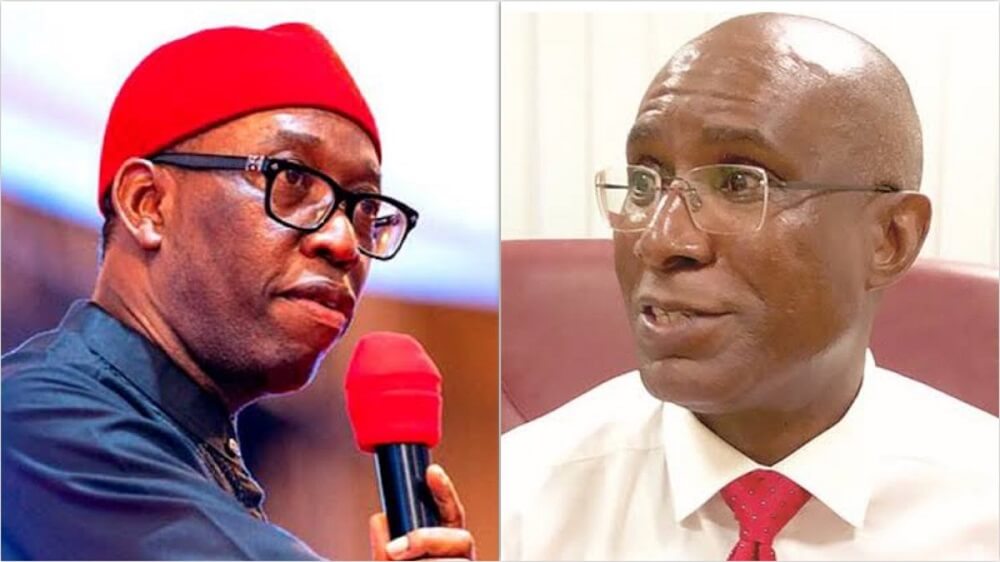 Former Delta State Commissioner for Information and Culture, subsequently Health, and one time Chief of Staff, Government House, Asaba, Dr Festus Okubor, has taken a swipe at the Deputy Senate President and Delta State Governorship candidate of the All Progressives Congress, (APC )Senator Ovie Omo-Agege, for engaging in what he called callous mudslinging against the Delta State Governor, Sen. Ifeanyi Okowa, even as he described the tenure of the DSP in Delta State public service, as financially disastrous.

Dr. Okubor whose views were contained in a detailed and comprehensive write up on the recently held APC Presidential Rally/Flag Off of the governorship campaign held at the Warri township stadium and made available to the press on Tuesday, November 22, also condemned Omo-Agege, the former National Chairman of APC, Comrade Adams Oshiomhole and the leaders of APC in the State, for their deliberate and calculated attempts to peddle lies aimed at discrediting the State Governor, while misleading the people of the State.

Declaring that the latest preoccupation of those he termed “disgruntled leaders of the All Progressives Congress (APC) in Delta State” is to discredit Governor Okowa and clothe him in the robe of a poor manager of resources who has squandered allocations to Delta State under his watch, Dr. Okubor however noted that this was a complete misrepresentation of the Delta State Governor.

According to him, “Those who know Governor Okowa will attest to his nobility of mind. Even those currently accusing him falsely know that Governor Okowa is a man of uncommon mettle whose sandals they are not worthy to undo in saner climes as they ought to be cooling of in jail for the many crimes they committed against the state from stealing from state treasury, extorting contractors and collecting money for ghost and unexecuted projects and for mace snatching.

“Certainly, public memory is not short and the internet never forgets. Those falsely accusing the highly respected Governor Okowa should google their names and that of the beloved Governor and they will see the infamous narratives around their names in contrasts to the nobility of spirit of the amiable Governor,” Okubor wrote.

While challenging those APC leaders peddling lies against Governor Okowa to subject their public service stewardship to scrutiny and auditing, Dr. Okubor described Omo-Agege and leaders of APC, as “ignorant and mischievous fellows”, and revealed that Senator Omo-Agege’s period first as Commissioner, Special Duties and then Secretary to the Delta State Government, was financially disastrous for the Government and People of the State, even as he explained in great detail, Omo-Agege’s alleged treacherous and corrupt tendencies.

“Omo-Agege’s House became a central bank where cooks made away with Ghana-must-go bags filled with money. His Orogun people will not forget how he extorted contractors and collected money for forty-eight projects that he didn’t execute. There were monies for hundreds of projects across the state that he seized using the tenders’ board.

“He thinks the people have forgotten. Is this the man wanting to be governor? The mace incident and his recruitment as a servant of the caliphate with him, a Chief kneeling to thank Buhari, remains repulsive to his people.”

He wrote this: “As for Adams Oshiomhole, he left Edo State in massive debt and destroyed the entire fabric of government. Governor Obaseki is still working to fix the catastrophe that Oshiomhole turned Edo State into. How he ran down the APC and embarrassed the nation before he was disgraced out of office is still fresh in our memory.

“Are these the men who should call out Governor Okowa on account of probity? Not at all. They lack what it takes,” Okubor explained and called on the general public, especially Deltans, to discountenance the ranting of Agege and Oshiomhole, noting that “They are raving in frustration as they are bound to have their day in the court of public morality,” he stated.

The former Delta State Government Chief of Staff, who is now a prominent chieftain of the PDP, also pointed out that the ongoing smear campaign against Governor Okowa, emerged from the “incoherent story by attention seeking Governor Nyesom Wike of Rivers State, that President Muhammadu Buhari released monies accruing to Niger Delta States for the 13% deductions from derivation funds and that the infrastructural achievements of his government were made possible by the money President Buhari paid.

“Well, nobody needs to be told that Wike has become a sore loser and a weeping baby. The questions people should ask Wike are: when was the money released? Why did he not tell Nigerians when the money was paid? Why is he just telling them now? Wike is an advocate of bad politics which is unhealthy for the polity.

“His new activism without definition, boundary or ideology, is a product of the fact that he was beaten during the PDP presidential primaries and furthermore he lost woefully to the noble Governor Okowa of Delta State. Wike is fighting his homestead and people. He is bound to lose because no man ever wins against his people. The fact that none of the other five South-South governors associate with Wike points to the truth that he has been rejected at home,” the renowned politician stated in the article.

Okubor stated further that: “The rabidly desperate promoters of the Wike bad belle narrative are Senator Ovie Omo-Agege, Adams Oshiomhole and their BANDits of political desperadoes wanting to push Delta to the EDGE of disaster. What the duo and their minions are pushing into the public space is the narrative that Governor Okowa squandered 250 billion naira accruing from the 13 % derivation fund released by President Buhari.

“In their unthinking nature they pointed at the flyovers (were) built by Wike in Port-Harcourt, take note, in Port Harcourt and not any other part of Rivers State and asked Governor Okowa what he did with the money accruing to Delta State. Their query could be as a result of crass ignorance or deliberate mischief to mislead the public and score cheap points.

“These are certainly not the hallmarks of altruistic politicians or statesmen. Altruism is never desperate as the men have chosen to be. Governor Okowa remains an astute manager of men and resources. The fact that he does not mount the rooftop to announce with multiple megaphones the number of projects he has executed does not diminish his monumental and unsurpassed achievements as a Governor.

Explaining in greater detail, Dr. Okubor said: “The truth with Delta State is that about 340 billion naira is accruable to it, but it has not been earned. The refund they are talking about is 292 billion naira and the Federal Government promised to pay in sixty installments. This was why the State requested a drawdown of 150 billion naira and only 30 billion was recently drawn. So the talk about a hefty sum of 250 billion being mismanaged by Governor Okowa is a concocted political lie.

“Only an ignorant or mischievous fellow will compare Delta State with Rivers State in terms of infrastructure development and spread. Rivers State is 55 years old, while Delta is just 31. It means that Rivers State ought to have more infrastructure. But let us compare. Delta State has about thirty-one urban centres, the highest in any state in Nigeria. Rivers State has only Port-Harcourt which is where all the flyovers Agege and Oshiomhole are drooling over are located. Whatever development going on in Bonny Island is by joint venture and the Rivers Government refused to meet its obligation.

Reeling out the comprehensive developmental achivements of the Okowa administration, the former Delta Information Commissioner wrote: “The Delta State government under Governor Okowa has constructed 1,905 kilometers of roads and 1, 035 kilometers of drains. “Delta State is Nigeria’s frontrunner in human capital development, 14, 075 youth entrepreneurs have emerged, over 223, 000 employment created with about 1.3 million indirect jobs. Delta State is number one in contributory healthcare scheme with more than 1.2 million enrolled.

“The State has four universities and seven other tertiary institutions, the highest by any state in Nigeria. Roads have been built in the riverine communities for the first time and there are 16 bridges under construction with 6 others completed. The bridges are ambitious and cost intensive projects that will link the riverine communities with the world.

“The list of projects executed by the Governor Okowa administration will show the even distribution across the length and breadth of the State. There is a deliberate integration of urban and rural communities so that all Deltans will feel a sense of belonging. Were Governor Okowa to concentrate all the State’s resources in developing only Asaba, then the city would have overtaken Dubai or New York in beauty.

“Governor Okowa is conscious of his place as Governor of all and not a sectional leader like the Orhomuru-Orogun Senator who took all the projects meant for the entire Urhobo nation of twenty-four clans to his miniature sub-community of Orhomuru-Orogun,” the distinguished political leader and statesman concluded.