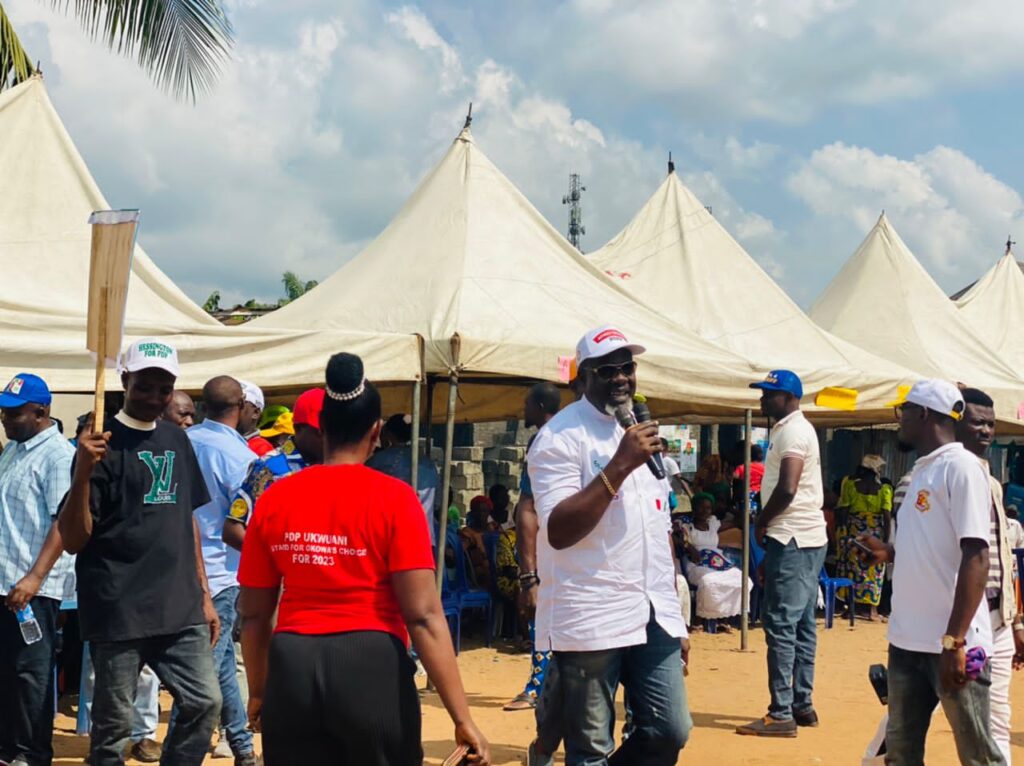 The clergy, those living with disability as well as those who dumped the All Progressives Congress (APC) and the Hausa community on Friday signed up to work for the success of the Peoples Democratic Party, PDP, at Obiaruku, during Day Two of the ongoing Delta North PDP Ward campaign.

They all made the declarations at different times in Ward 9, when the Moses Iduh-led PDP campaign train arrived in the Ward.

While the former APC members who openly dumped the party at the Ward campaign said they had to dump the “expired and bad drug party” that brought hardship to the people and return to PDP to help reset the nation and put it on the part of prosperity.
The representative of the persons living with disability said: ” We the persons living with disabilities are solidly behind PDP. Okowa has been helping us a lot. We will work and vote for the Atiku-Okowa Presidential ticket as we all the Party’s candidates for the election.”

Representative of the clergy said that the clergy in the community has already declared an all-night prayer session for PDP’s victory.

Representative of the Hausa community in Obiaruku Ward 10, Abdullahi Suleiman said: ” We will give PDP 100 percent votes all-the-way and across Nigeria.”

Earlier in Ward 8, at Umuebu community, the Campaign Co-ordinator for Ukwuani Local Government Area, who is also the Delta State Commissioner for Finance, Sir, Okenmor Fidelis Tilije announced to the ecstatic joy of members of the community that rehabilitation work on the Umuebu Road will commence next week.

Welcoming the APC decampees to the PDP fold in Obiaruku, Delta North PDP Chairman, Elder Moses Iduh, said the dumping of APC is a pointer to the fact that no other party except PDP exists in Obiaruku Ward 10.
Iduh said: “I welcome you to your original home. In PDP, we don’t have newcomers; once you are in PDP you enjoy equal rights with others. I don’t see how any normal Nigerian who does not like suffering, who does not like insecurity, who wants to go to the farm amid safety will vote for APC or any other party apart from PDP.”

He reminded those who have not collected their PVCs to go and do so. He said PDP wants every vote to count for the party. “You can only vote when you have your PVC. It is the ticket that gives access to the ballot papers and the polling booth,” Iduh said.

At every Wards visited the PDP candidates for the election, Prince Ned Nwoko, for Senate, Nnamdi Ezechi, House of Representatives, Ogbuefi Chukwudi Dafe, House of Assembly, Sir Monday Onyeme, Deputy Governorship and running mate to Rt. Hon. Sheriff Oborevwori for Governor were all introduced to the people, who promised to vote them in five-over-five, and PDP all-the-way.

At Ward 9, Tilije’s Ward, the campaign turned into a carnival, with sound highlife music in praise of PDP and its candidates rendered, and to which all the candidates and Nollywood star, Mrs. Regina-Daniels Nwoko in company of her husband, Ned Nwoko danced to.