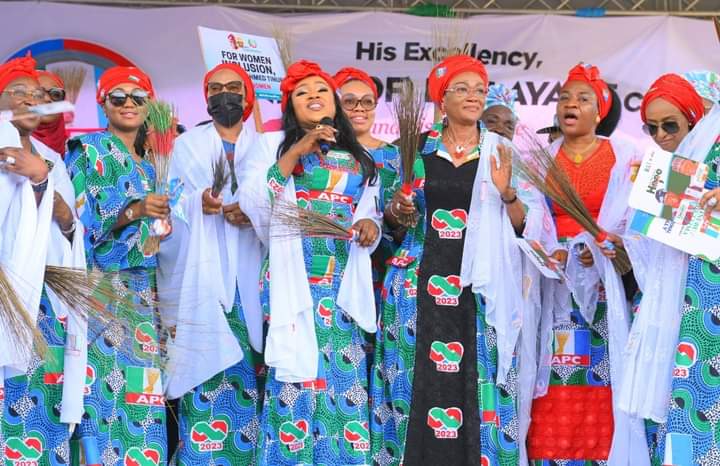 Women members of the ruling All Progressives Congress, APC, on Saturday converged on Calabar, Cross River State, for the South-South rally of the Tinubu/Shettima Women Presidential Campaign Team.

At the event, which was held at the U.J Esuene Sports Stadium, the First Lady and grand patron of the women’s team, Dr. Aisha Buhari expressed optimism that women and youths will deliver in the forthcoming general elections, noting that the party stands for peace and progress, and urged the women to be fully committed to the campaign.

The First Lady was represented by Zahra Buhari Indimi, her daughter.

Senator Oluremi Tinubu, wife of the APC presidential candidate and chairman of the women’s team, extolled the qualities of women from the South South region and pledged her commitment and that of her co-chairman, Hajiya Nana Shettima, to ensuring that women’s issues are prioritized if their husbands are elected. She further called on the women in the region to support the APC in its quest to win the upcoming elections.

Dr. Linda Ayade, wife of the Governor of Cross River State, urged women and youths to vote APC at the polls, especially as the current administration has performed well.

Governor Ben Ayade, in his remarks, thanked the women for the choice of Cross River for the women’s campaign flagoff in the South South region, and lauded the leadership qualities of the APC presidential candidate.

“Our support for Asiwaju Tinubu is not because he is perfect. Our support for Asiwaju is because of his proven excellent track record as a person who can consolidate on the gains of the present, drive inclusive growth, and lead our country to become more prosperous. The Tinubu/Shettima ticket is the most experienced and the most progressive combination available on the ballot”, he said.

The APC National Women Leader, Dr. Betta Edu, who also hails from Cross River, assured the women of her commitment to ensuring women’s interests are protected and urged women to come out en masse to deliver a record number of votes for the APC presidential candidate.

On arrival in Calabar, the delegation paid a courtesy call on the Obong of Calabar, His Eminence, Edidem Ekpo Okon Abasi Otu V, who was represented by the Prime Minister.