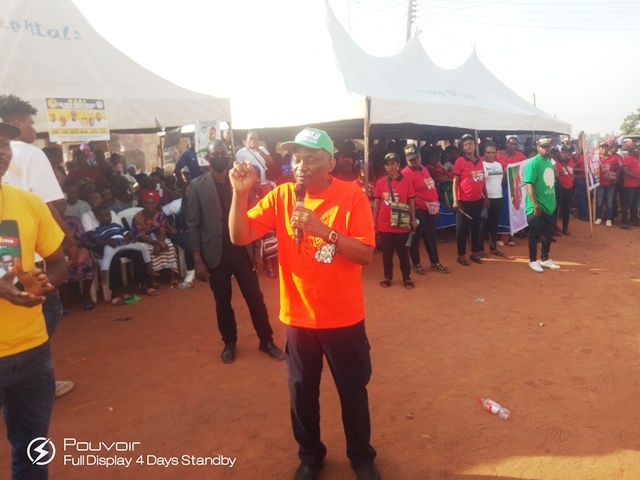 The Minority Leader of the House of Representatives, Rt. Hon. Ndudi Elumelu has assured that a Presidency led by Atiku Abubakar and Sen. Ifeanyi Okowa will bring in meaningful development that will impact positively to the lives of Nigerians.

The Minority Leader, spoke Monday and Tuesday in Oshimili North Local Government Area, Delta State while canvassing for votes for the Peoples Democratic Party (PDP) and all its candidates during the on-going rallies ahead of the forthcoming general elections

A massive crowd followed Elumelu who was in the train of the Delta North PDP Ward Campaign Team led by the PDP Senatorial Chairman, Elder Moses Idul, as it visited 10 wards in five communities including; Ibuza with five wards, Ukala – Okpunor, Akwukwu – Igbo, Ebu, Illah and Okpanam.

Elumelu, while soliciting for their votes, appreciated the people of Oshimili North for their love for the PDP and further explained that the Atiku/Okowa ticket will wipe all forms of insecurity that has bedeviled the Nation.

“Atiku is a complete gentleman who understands the urgent needs of Nigerians and he is prepared to lead the country out of the woods. He is not a man that says something and he does not do it.

“He chose our Governor, His Excellency Sen. Dr Ifeanyi Okowa, to run a joint ticket with him for the presidency because of his belief in capacity. Our Governor is intelligent, well educated, well behaved, manned and calm. You cannot make the number two citizen of Nigeria without being calm and approachable. He chose him because he believe that he is the person that can assist him. He believe in him to deliver Nigeria with him.

“I strongly believe that the Atiku/Okowa Presidency will bring meaningful things to Nigeria. It is a ticket that will wipe away insecurity, ensure a stable and robust economy and ensure that our debts are written off. He did it before with President Obasanjo and we had zero debt profile. They are bringing in men and women with proven integrity who are technically sound,to help deliver Nigeria from the economic quagmire that we have found ourselves.

“If you look at all the federal roads across the nation, they are in deplorable shape. Atiku/Okowa has a master plan to make them motorable for Nigerians. They have the master plan on how to improve on the lives of the people of riverine areas of Nigeria and make them enjoy and benefit from the wealth that comes from their areas,” the Minority Leader stated.

Further assuring the victory of the PDP, Elumelu said; “the APC Presidential Candidate, Asiwaju Tinubu has already blessed PDP publicly on national television. He specifically delivered Sheriff Oborevwori as Governor of Delta State when he told Omo-Agege, also on national television, that he will be Governor of Niger Delta State in a country where there is no state as Niger Delta State. All the candidates of the Party from national to the state have no problem winning in the general elections for the fact that PDP is blessed and has been chosen by Nigerians,” he said.

Elumelu, who seeks the mandate of the people to return to the House of Representatives, assured that he will dwell more on human capital development by ensuring that more youths are recognized in his empowerment programme, while also involving women to make them self-reliant by supporting them financially.

“We are going to vigorously pursue the establishment of the Asaba Federal University of Technology, Asaba, and the issue of the creation of Anioma State. Though the bills has been passed by the two Chambers, but yet to be signed by Mr. President, I hope that before he leaves, he will assent to it, particularly the establishment of Asaba Federal University of Technology,” he assured.

He stressed that the establishment of the University in Delta State will go a long way in creating more job opportunities for the people of Aniocha/Oshimili Federal Constituency, Delta North Senatorial district and Delta State as a whole.

“Most importantly, we will put forward bills to make lives meaningful in Nigeria, not only in my constituency and also ensure that what is due to our people gets to them without any form of interference,” Elumelu promised while assuring that more community based projects will be sighted in more of the communities in Aniocha/Oshimili Federal Constituency, Delta North and Delta State in general.

He therefore urged the people of Oshimili North to vote overwhelmingly for Atiku/Okowa for President and Vice president, Sheriff Oborevwori/Onyeme for Governor and Deputy Governor, Ned Nwoko for Senate, Ndudi Elumelu for House of Representatives and Frank Esenwa for House of Assembly.

Elumelu told the people to look out for the Umbrella, the symbol of the PDP and vote for the party in the Presidential, Governorship, National and State Assembly polls in the 2023 general elections.