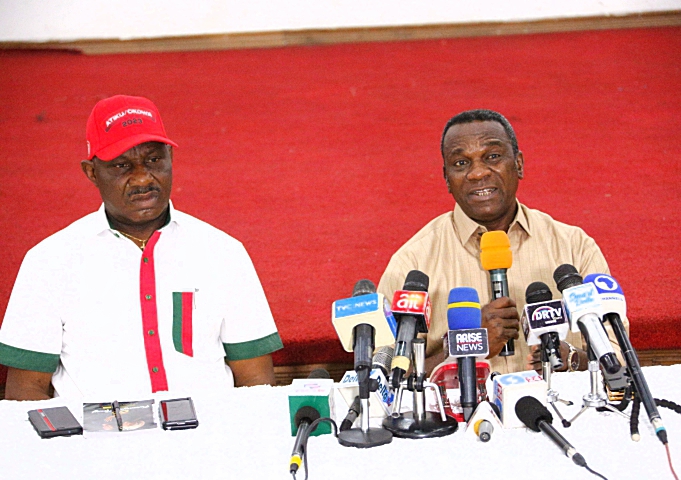 Delta State Government has said it was the most solvent in the country, with enough credit to liquidate all outstanding fiscal obligations.

The Commissioner for Finance, Chief Fidelis Tilije, who stated this at a news conference in Asaba said the state government had outstanding commitment of N84 billion to contractors and N27 billion pension arrears.

He explained that the pension liability was part of the over N130 billion arrears inherited by Senator Ifeanyi Okowa’s administration at inception in 2015.

Tilije stated that the state could have taken the option to discount the entire N240 billion expected from the 13 per cent derivation refunds as was done by other states but decided to take only N100 billion to complete some legacy projects.

Joined by the Chief Press Secretary to the Governor, Mr Olisa Ifeajika, he said that Governor Okowa, being a prudent and considerate leader chose to keep the balance of the funds for the in-coming administration.

He recalled that Okowa administration faced serious financial challenges at inception in 2015, a situation that necessitated some borrowings at that time.

“You will recall that when the administration of Sen. Dr. Ifeanyi Okowa came on board, the economy of this state and that of Nigeria was clearly in dire straits.

“Therefore, a lot of rejiging had to be done for us to be able to survive and pay salaries. The salary bailouts was not for Delta state alone,” he said.

“I have said categorically that Delta State is the most solvent state in this country which is why I said that if we were to take a discounting of all the expected refunds due to the state, we would write off all our debts without touching FAAC receipts nor Internally Generated Revenue (IGR).

“This means that Delta State today is the only state that can write off all its debts and then run normally the way we are running and still ensure that things are done.

“But then, Sen. Ifeanyi Okowa decided not to discount the proceeds of all these refunds that are actually due to Delta state.

“All other oil-producing states to the best of my knowledge, did a 100 per cent discount of all those refunds. If we were to do that, we will clean up all our debts but we didn’t do that,” he stated.

The commissioner said that government expenditures were funded by different sources and expended in making payments to several projects, including recurrent expenditure.

“The one that is trending now is that people are saying that we have taken N240 billion from the Federal Government of Nigeria.

“The truth is that the N240 billion being referred to is not the totality of the funds we have received from the Federal Government or FAAC as the case may be.

“It is a refund to all oil-producing states because we found out at FAAC plenary that the 13 per cent that were expected to be deducted were not deducted when those expenditures were made.

“I was very clear when I said that the deductions that were not carried out at that point in time was the one that has to do with the excess crude oil expenditure; the second one is on subsidy and the third one is on priority projects,” he said.

Tilije also disclosed that the state government had invested N20 billion in a very large gas project coming up in Warri which, according to him, is expected to restore the economy of the oil-rich city.

“This administration has ensured that the headquarters of the gas company is located in Warri. It is a very large gas project that will restore the economy of Warri as an oil rich city.

“We have invested N20 billion in that project and we are hoping that we could do more. The future is coming and it is in gas,” he added.

On his part the Chief Press Secretary to the Governor, Mr Ifeajika, urged journalists to be circumspect as a lot of politically-motivated stories were being thrown into the media in the rundown to the 2023 general elections.

He said that the state government under Governor Okowa, being a prudent and transparent administration, would continue to be accountable to the people at all times.
.