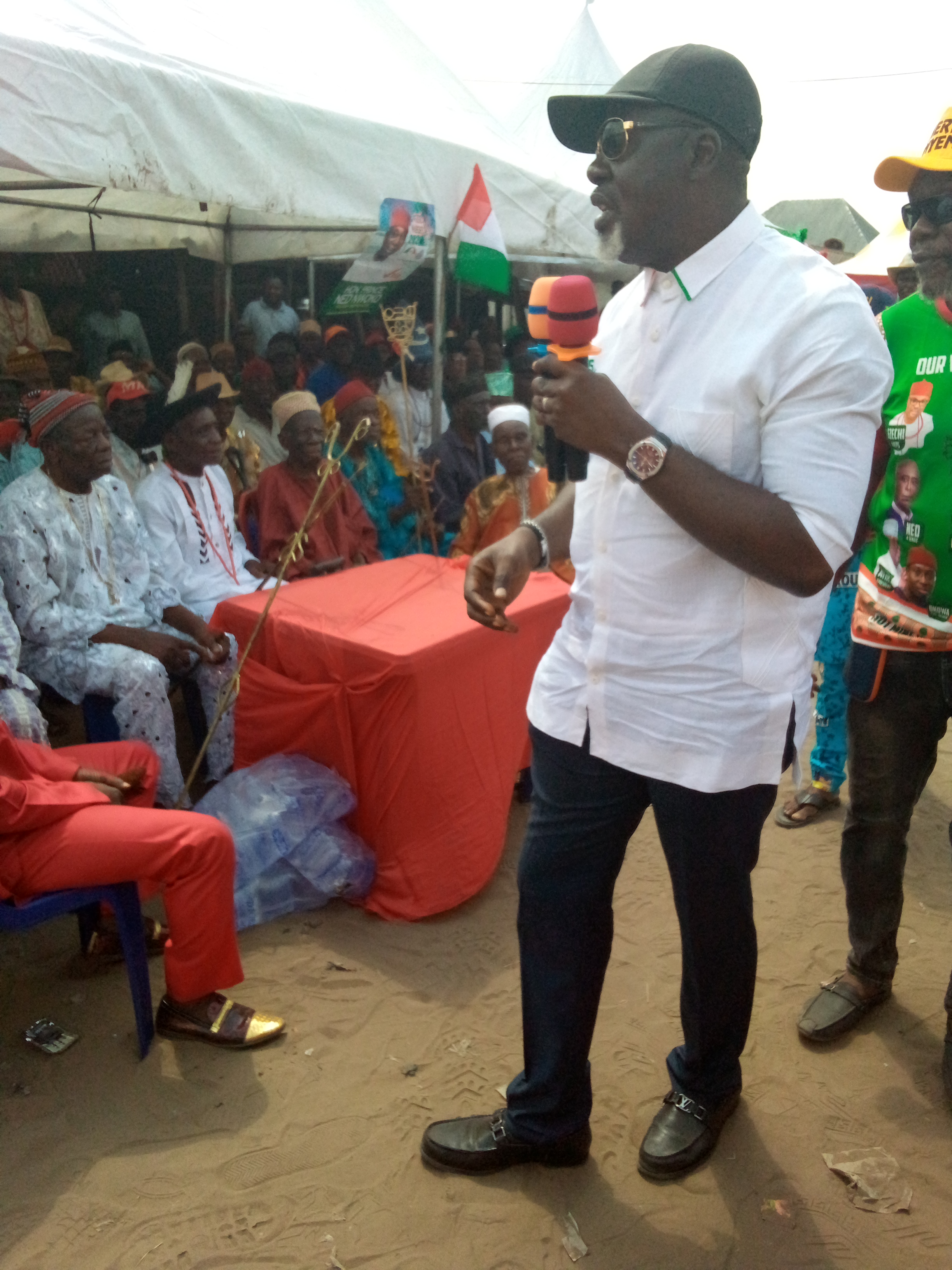 The Delta North Senatorial campaign train of the Peoples Democratic Party (PDP) pulled up Thursday at Ndokwa West Local Government Area where a mammoth crowd of faithful and supporters receive them with applause.

The PDP supporters expressed their commitment to work for and vote for the emergence of all the candidates of the party in the 2023 elections.

All the Ward Chairmen while welcoming the campaign team made up of notable PDP leaders, chieftains, and the candidates, confirmed that their respective Wards are made up of mainly PDP members, and assured of the party’s victory in all the elections.

Chairman, Ward 6, at Ogume, Mr. Felix Ossai said that “all PDP candidates are our candidates, and we are all committed to the project of delivering our votes to all the candidates. We will vote five-over-five for PDP.”

At Ward 7, Ogbagu-Ogume, the Chairman said: “We don’t have any other political party, and we are going to deliver PDP five-over-five.”

Ward 4 Chairman also gave the same assurance, saying: “We shall give PDP 99 over 100 votes,”

While Ward 2 Chairman said; “This Ward is a PDP Ward. Since 1999 we have always voted 100 percent for PDP.” It was the same assurance from the Ward 3 Chairman, Mr. Odigwe who said the people will vote for PDP all-the-way.

The campaign Co-ordinator for Ndokwa West Local Government, Rt. Hon. Sam Osasa, who was a one-time member of the House of Representatives, called attention to the mammoth crowd of party faithful, saying that it confirms the fact that the Local Government is mainly made up of PDP members. “The Wards are PDP Wards. Atiku for President, and since Okowa is going as Vice-President to him, we have agreed that we are voting PDP five-over-five. PDP is Ndokwa West and Ndokwa West is PDP.”

Osasa said a mini-rally was held across the Wards to sensitise the party faithful about the visit of the campaign team, and that the people are prepared to vote for all the candidates of the party. “We have gone round to sensitise our people that this campaign train is coming, and we are prepared to give five-over-five to PDP,” Osasa said. And in Ward 2, he said: “Ndokwa West is signed and sealed for PDP. We are prepared five-over-five. We have never lost in this Ward and we shall give PDP 100 percent.”

And at Ward 3, the Ndokwa West Campaign Co-ordinator said: “Please see and appreciate my people. Ndemili Ward 3 is composed of many communities and is almost the largest Ward in Ndokwa West. You can be rest assured that we are delivering five-over-five to PDP.”

The Senatorial Chairman, Elder Moses Iduh, who introduced all the party’s candidates and showed them round to the people, urged the people to translate their massive turnout at the Ward campaigns to votes for all the PDP candidates.

He reminded the people how the All Progressives Congress (APC) Federal Government brought sufferings to the country. “APC did not fulfill its promises to Nigerians. On the day of election please translate this massive turnout here today to votes for PDP.”

He continued: “We have come to beg the people of Ndokwa West that it will be shameful that the Ward of the PDP Deputy Governorship candidate, Monday Onyeme did not vote 100 percent for PDP.

“I beg you people of Ndokwa that God has remembered you and picked one of you for Deputy Governorship. I beg our women, our youths to go and collect your PVC so you can vote for the PDP, because you can only vote when you have your PVC,” he said.

Iduh told the people that PDP’s manifesto is that Nigeria will be better again. Therefore, we have committed the party’s manifesto to the hand of God to deliver. He said: “APC came to power through deceit. They did not win the election that brought them to power and whatever that is achieved by deceit does not last. That is why APC must be chased away from the Federal Government.

He announced the names of the party’s candidates, including Atiku/Okowa Presidential ticket, Prince Ned Nwoko for Senate; Nnamdi Ezechi, for House of Representatives; Sheriff/Onyeme for the Delta Governorship ticket, and Hon. Charles Emetulu for the State House of Assembly.

While Ezechi told the people to vote PDP all-the-way because this is the first time that Ndokwa Nation is getting prime positions in Government, Emetulu said: “Please let’s vote PDP five-over-five.” He reminded the people that someone once said that ‘the number of who will vote for APC will show the number of mad people in the country.’ “That’s why I beg you to vote for PDP five-over-five.”

Ned Nwoko, the Senatorial candidate who came with his wife, Regina, said he was mainly in the race because of his concern for the plight of the Nigerian youths, who he said have been terribly neglected.

Pointing out that, that is the reason he has made himself the Youths Ambassador; Nwoko invited the Ndokwa West Local Government Area Youths and all the youths of Delta North to his country home on December 10, 2022 at Mount Ned, Idumuje-Ugboko, Aniocha North Local Government Area.

He said it is to enable him to interact with the Anioma youths, hear from them and tell them what he and other candidates of Anioma PDP have for them.