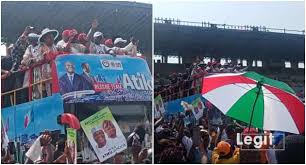 Vice-Presidential Candidate of Peoples Democratic Party (PDP) and Governor of Delta, Senator (Dr) Ifeanyi Okowa, on Monday expressed confidence that Nigerians would not allow the All Progressives Congress (APC)-led Federal Government that had impoverished them to remain in power.

He said that the prevailing level of decay in the socio-economic life in the country had never been recorded in its history, and blamed it on the gaping ineptitude of the ruling APC.

Okowa stated this at PDP’s Presidential Campaign at the Tafawa Balewa Square in Lagos on Monday, and remarked that by its abysmal performance, which was common knowledge to Nigerians, APC had returned the country to “dark days”.

The vice-presidential candidate, however, affirmed that recovery was possible and close as the Presidential Candidate of PDP, Alhaji Atiku Abubakar, was determined to rescue the country.

He, therefore, urged Nigerians to mobilise fully and support the PDP’s mission of recovering the country and return it to brighter times.

He said that Atiku Abubakar was a Pan-Nigerian, and a candidate accepted across the country, adding that he “is a unifier, who believes immensely in Nigeria”.

“Our nation, Nigeria, can work better than its is now and the only man that can do this is Atiku Abubakar.

“He will restore the lost glory of Nigeria. Nigerians are conscious and wiser now, with their experience of poor governance of the APC”, he stated.

Okowa urged voters in Lagos to cast their ballot for all PDP candidates, saying that was the only way to remove the state from being someone’s dynasty.